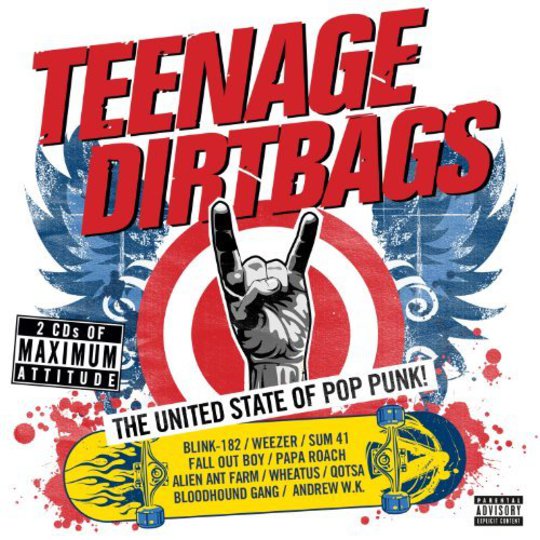 It’s easy to be dismissive of pop punk because for the most part it’s bloody awful. You’re supposed to dismiss pop punk, it’s the most disposable, tissue thin, forgettable end of what we laughably still call 'alternative' music. Even its name doesn’t really make sense- 'pop' cannot be punk. 'Punk' cannot be pop. We can argue for a lifetime about what punk really means, but at the very least it means attitude; an aggressive, outsider perspective that deliberately shuns, mocks or rails against the mainstream. Pop music IS the mainstream, that’s the entire point of pop. We can love punk, we can love pop, but they’re fundamentally opposed. It’s like making a vegan cheese sandwich. You can’t have it both ways.

Yet for a good chunk of the late Nineties and early Noughties we did have it both ways - pop punk was massive. A new compilation, Teenage Dirtbags (natch) aims to capture the spirit of the time, presumably aimed at those who deleted their music collections years ago and feel like revisiting the soundtrack of their first teenage fumblings.

You can see the appeal, because pop punk broke big and its roots are genuinely brilliant. It emerged from the Orange County and Bay Area punk scenes, where bands played loud, fast party music itself influenced by Eighties hardcore, snotty British punk and Ska. Bad Brains and Social Distortion begat The Offspring, Rancid, NOFX and Green Day - bands who added Sunny-D, goofball charm and really cheap speed to the primitive thump of their forebears. Then Kurt Cobain shot himself, Grunge got really boring and all of those bands went MASSIVE. They were good bands too, bands whose mission wasn’t just to make dick jokes onstage at the Warped tour - Offspring were brilliant, Green Day’s early stuff is great, Rancid had a genuine social conscience and all three made properly thrilling punk rock.

Frustratingly Teenage Dirtbags ignores all of that. It collects together the absolute dregs of the era, the most generic, charmless, fratboyish, stupid, vomit inducing jouvenila of the early noughites. The type that must have given record company bosses erections once they saw how well Dookie and Smash had sold. The appeal of punk was always for outsiders, but most of these bands took punk as a commodity, stole your lunch money and shoved your head down the toilet. It’s almost insulting that some of this ever got bracketed as ‘alternative’. It was the dark old days of hair metal and sleaze-punk, Ratt, Crue and Poison, all over again- music for the guys that made the football team, not the ones smoking behind the gym.

What strikes you first is how generic it sounds. A good chunk of the two discs comprise the biggest selling cuts from Wheatus, Blink 182, Sum 41, Lit, New Found Glory, Bowling For Soup, Fountains of Wayne (whose ‘Stacey’s Mom’ was a blight on an otherwise unimpeachable pop career), All American Rejects, Yellowcard and The Ataris, all of which basically sounds like the same band. It’s jumped up jock-rock, and it’s almost entirely vile. Only Lit’s chugging, slightly melancholic ‘My Own Worst Enemy’ and the Ataris’ punchy take on Don Henley’s ‘The Boys Of Summer’ really has anything resembling substance in that lot, and in the latter's case you can thank Henley for that (The Ataris, it should be noted, had much more energetic, emotive and interesting work. Naturally we don’t get any of it here). For the most part these bands sit on the pop/punk line but fail because they commit to neither. To be charitable, Blink 182 have a cracking way with a chorus but like a decent footballer on a terrible team their association with lesser players does them a disservice. Are there any more plastic 'punk' bands than Sum 41 or New Found Glory? At least Busted knew they were a boyband - their absence here is presumably some sort of baffling nod to alt. credibility.

What’s worse (and, yes, it does get worse) is that whoever curated this decided to expand things to include Nu-Metal. Not the good end of Nu-Metal either, not Korn’s peerless ‘Blind’, or Slipknot’s brutal ‘Surfacing’, they’ve added the shiny, second generation stuff. We have Alien Ant Farm pissing over ‘Smooth Criminal’, we have Papa Roach’s winceingly self-absorbed ‘Last Resort’ and gay-bashing Christian metallers P.O.D’s ‘Alive’. This is bad music. Even Bowling for Soup knew that when they complained about “listening to rap metal” at the top of disc one. Worst offender of the lot is probably Puddle Of Mudd’s astonishingly insipid ‘She Hates Me’, a song which takes the exact chord structure of Nirvana’s ‘Lithium’ and smears it in baby shit. It’s like punching Kurt Cobain’s mum in the face. Then there’s Crazy Town’s genuinely hateful ‘Butterfly’, a horrible, wet attempt at funk based on a sampled RHCP riff that must make John Frusciante retch.

In fairness to Teenage Dirtbags there’s also some properly amazing music here - just not much that actually falls within the pop punk/Nu-metal remit. Disc two has Weezer’s ‘Buddy Holly’, QOTSA’s ‘No One Knows’, and Hole’s ‘Celebrity Skin’ - none of which sit at home here. This is isn’t pop punk at all, it’s bought-in space-filler, upping the quality but ignoring the concept. Can anyone explain the presence of Marilyn Manson’s version of ‘Tainted Love’ or Andrew WK’s ‘Party Hard’? What’s the point of a compilation CD that doesn’t stick to its own rules?

The thing is, beneath the hateful jock-rock and the space-filling grunge classics there’s actually a decent alternative punk compilation here. It’s all buried at the end of the discs, but the inclusion of Rival Schools’ ‘Used For Glue’, Hundred Reasons' ‘Silver’ and Head Automatica’s ‘Beating Heart Baby’, as well as nods to ska-punk from Less Than Jake, Reel Big Big, Goldfinger and Sublime does show some understanding of why this era was valid, because the stuff happening away from the smug college rock of the American Pie movie soundtracks was often really good. Linking the proto-emo of Rival Schools to its Cali-punk roots, via the Nineties megastars could have made a compelling and hugely enjoyable mix-tape. Instead we have a collection of, genuinely, some of the most awful music ever committed to a CD, a two disc justification for the wiping-out-and-starting again of the entire music industry.

If this is all punk is and was, then it was a failed experiment. If aliens invaded and this is the only music they could find then you’d welcome their planet-destroying death ray: our civilisation deserves it. Don’t let it happen, never let anyone, ever, tell you that this is what punk became. Smash on sight, for the good of us all.