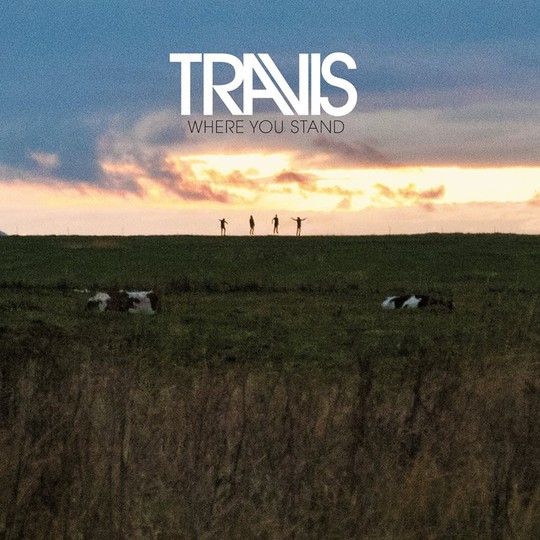 They were tied to the Nineties, typecast as a jangly indie-pop band whose maturing saw them succeed. From a distance, it seemed like their not-particularly-cool brand of well crafted songs, was always inextricably linked (by journo scum and music snobs) with Coldplay’s conquering of the known universe.

They spent the Noughties shifting from Chris Martins’ shadow only to find themselves lost at sea, floating about like the proverbial driftwood, never quite making it back ashore to the media wonderland of green rooms and gongs. For a while, it seemed their lyrics (especially about being tied to an era and drifting, c'mon, we've only just begun, do keep up...) had become self-fulfilling prophecies...

And yet, revisiting Travis's Singles Collection and from repeated plays of their new record Where We Stand (we’ll get to that in a minute, don’t worry), it seems baffling to think Travis never had one of those second-wind moments like Snow Patrol. A brief easing of the critical cluster-fire would easily see them become beloved Elbow-like elder statesman, woven into the fabric that keeps our nation’s bosom warm, forevermore.

To be fair, the latter half of the Nineties in British alternative music gets a somewhat unfair shake of the stick, especially in the guitar-obsessed corners of the music press. Grunge was long gone, Brit-pop was simmering out ('Why Does It Always Rain On Me' was deemed the whimper that declared the war fought from Graham Coxon's favourite pub in Camden to officially be over...) and the meat 'n' potatoes rock of 'Nu Metal' was never going to please cynical critics (who continue to bang on about what a poor time it was for music) nor excite them scholarly, self-anointed pop historians.

Meanwhile, Keane sold over a million copies of their debut LP; Mansun, Supergrass and Stereophonics topped the charts; Coldplay and - after a very slow start in the UK - Muse exploded worldwide, filling stadiums. Spiritualized released Ladies & Gents.... XTRMNTR came out, and there were great but not typically British records from Aphex, Arab Strap and Boards of Canada.

Then there were mainstream TV shows like CD:UK and TFI Friday, along with Mtv2, which became not just alternatives to Top of the Pops and Radio 1, but catalysts for propelling rock-ish bands who wrote ‘proper songs’ and beardy songwriters into the UK’s CD-filled living rooms, alongside all of that pop guff and Busted ’n’ McFly gateway-drug fluff. Things died down a little for strummed ditties whilst credible Sugababes ’n’ Kylie pop and So Solid Crew dominated for a short while.

Then there was what the music weeklies dubbed the New Acoustic Movement (Kings of Convenience! Turin Brakes! Badly! Drawn! Boy!), which bumbled along until the New Rock Revolution caused a punk-like generational judder, that some deemed a year zero (of sorts), as The Vines, The Strokes, The Datsuns and The White Stripes became the coolest bands in the world for fifteen minutes (I mean, it wasn’t hard when the best British music had to offer at the time was the Ordinary Boys and a bunch of bands who once supported Hundred Reasons), paving the way for a fresh-faced ‘MySpace generation’ of Brooklynites in Urban Outfitter garb singing about Daft Punk, acting as if they owned alternative music. Then, after initial British jabs in the fight for transatlantic supremacy from Franz Ferdinand, The Darkness and Kaiser Chiefs, along came a lucky-uppercut and the British-bulldog sucker-punch of Alex Turner barking “you’re not from New York, you’re from Rotherham.” With those immortal words, the “game changed” and attention shifted back across the Atlantic once again. A new Union Jack-shaped line was drawn in the sand, albeit one that - by guitar-snob standards - was far more open to soul (Winehouse), pop (Lily), electro (Justice) and r&b (Beyonce 4EVA!).

Travis somehow stumbled through all of this, seemingly unfazed by fast-fading faddy fashions and the changing transatlantic tides. They soldiered on into the new millenium, playing far-flung festivals and touring a new album every once in a while. It’s reassuring then to discover that the band releasing their seventh record, are still the same chaps who grasped from day one that all that’s really important is writing an undeniable hook (all they wanted to do was rock, etc, etc...). Melodies matter, and an honest human heart is a rare commodity, and if you can lightly sprinkle some poetic but not pretentious words on top, the years of studying The Greats will do the rest... It's Travis being the Travis we know (and love). Obviously, a dubstep-inspired album of rumbling EDM basslines that ends up as half-cocked Pop-era U2 tosh was never really on the cards, but stranger things have happened.

“These old record sleeves don’t keep me warm at all, and the TV won’t answer me,” opines Healy toward the end of Where You Stand’s title track, and you’re transported right into his living room. After he’s metaphorically offered you a cuppa, a biscuit and decluttered a comfy chair for you to lean-back into, you soon get a sense of his hunger to scurry away from being a taxi for his kids to return to the studio, and get back out on the road. It’s this undeniable urge and urgency to create and communicate that burns bright through almost every minute of the record. Sure, there’s still that sweet, softly-softly charm that you expect from the band who released ‘Sing’ and ‘Why Does It Always Rain On Me’, they obviously haven’t suddenly set their guitars to wolf howl, but there’s this wonderful sense that this - making music, communicating, maybe inspiring people to rethink their life - really matters, still, and after all these years they're even more determined. Pent up frustration (and perhaps disappointment about the somewhat forgettable pub-rock of Ode to J. Smith) seems to have honed their trigger fingers and renewed their hope, faith and purpose. These songs have been crafted and re-crafted, and they double-underscore that Travis are still some of the greatest songwriters around... now where are their croissants?

The Elliott Smith-ish ‘Reminder’ seems cut from the same whistling cloth as Andrew Bird’s finest ditties, but it almost seems weak after the widescreen wonder of album openers ‘Mother’ - which is three parts Springsteen, one part Wim Wenders soundtrack - and REM-era-Idlewild-minus-the-snarl 'Moving'.

It’s hard to understand why Fran Healy hasn’t been recognised as one of the greatest songwriters of our time - especially when you consider how much fans and musicians bang on about Noel Gallagher, Ryan Adams and Rufus Wainwright. Every aspiring songwriter should spend an afternoon with Travis’ Singles collection, as it - much like this new record - is an utter masterclass. Healy's simple turns of phrase contort idioms into something otherworldly, by elevating the everyday and making the familiar mundane things in our life seem strangely significant and poignant. On each of opening four tracks the songs reach a dizzying pop crescendo where the only other band you can think of Fleetwood Mac (ok, maybe they're a little bit Crowded House-y too, but is that really such a bad thing?). It's a joy to hear them composing songs which mix subtlety and world-weary wonderment with shimmering, breath-taking, radio-friendly anthemics. They're a true national treasure, and this isn’t something you, me or anyone I know would have confessed in the years since Good Feeling (not really something I could have confidently spluttered before then either, to be honest, but then I was an U16 Boy...), whilst we all busied our minds with awe for James Mercer or Murphy.

In fact, with its melancholic lilt Where You Stand could easily be a new record from The Shins, not that it will see the band transition into Urban Outfitter’s album of the year list alongside the tunelessness of Nineties-nostalgic hipster tribe anthem-laden albums by AlunaGeorge and Disclosure anytime soon... Being a Travis fan won’t help you make friends with hipsters, but perhaps that’s just one more reason to cherish them.

'Nice' and 'pleasant' are two words any Fran Healy fan has to sidestep when recommending Travis’ music to a friend. These words are the bedfellows of 'jejune' 'inoffensive' and 'boring', they are not desirable prerequisites. There are quite a few nice, pleasant songs on Where You Stand, including the slightly plodding fairy-light-friendly ‘Different Room’ and the end titles piano plume of ‘The Big Screen’, with its breathy talk of actors washing off their bruises (although admittedly it has ‘big independent movie soundtrack’ written quite literally all over it). And yet, even the weaker moments of the record are defiantly Travis-esque. The worst thing you can say about anything on this record is that they’re solidly crafted, faultless songs.

Even with their debut Good Feeling, way back in 1997, Fran Healy and co., had such assurance in who they are, and it’s reassuring that they still know where they, er, stand. Of course, it’s easy - really easy - to hate Travis, and rubbish them for standing still with a forlorn hook in their paw, but if staying true to yourself and writing an impeccable collection of songs that make the world that we know glow in a translucent blue hue is wrong, I don’t wanna know what’s right.