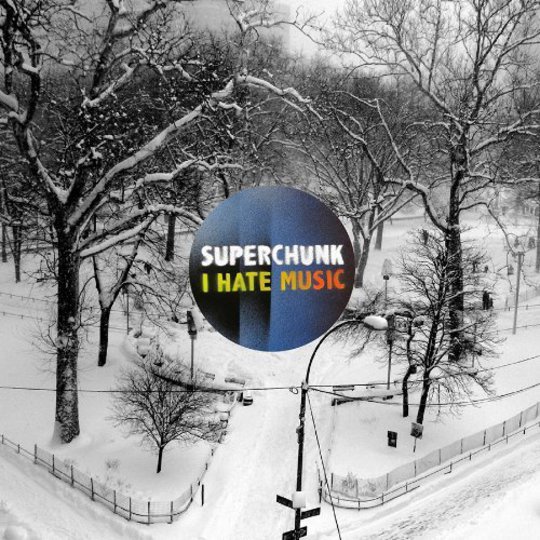 Often overlooked and undervalued by both the mainstream and alternative press during their initial lifespan and ignored for the most part by a Nineties alt-rock audience sated either by brutalist angst or retro stonerisms, Superchunk have spent great portions of the last 25 years quietly (but very, very loudly) producing a series of immaculate albums that are filled with youthful glee, artful introspection and tunes so skyscraping you could hurt your neck looking up.

Leaving a nine year semi-colon (discounting the excellent Clambakes Series… of live albums and a b-sides collection) between the nostalgic, inspiring Here’s To Shutting Up and 2010’s ferocious, delicious Majesty Shredding, Mac McCaughan’s Chapel Hill crew have returned relatively swiftly this time with I Hate Music. It's a record by a band now firmly in their forties who are using the strong proposition of doubt conjured by the title as an opportunity to illustrate in the most vivid colours available exactly why they are compelled to continue living the band life more suited to kids in their twenties.

‘Me and You and Jackie Mitoo’ begins by questioning the worth of music itself – “I hate music, what is it worth?” – it chugs into life resigned but delighted – “Cram into the back of a van oh yeah / All of our friends with no plan oh yeah” then pauses for consideration before launching into a riotously memorable, entirely personal chorus that could have sat comfortably on No Pocky For Kitty twenty-some years ago.

Their return to Europe after many years away from touring life is depicted on ‘Trees of Barcelona’ a song celebrating the romance of adventure, of friendship and times “when the world slipped our minds” Jon Wurster’s ever-perfect drumlines nudge along a sweet synth as sun-glowing moments are listed wistfully – “on a motorbike in Barcelona… Walking down the last street in Barcelona”. As an evocation of the upside of rock n roll touring there has rarely been a song this resonant.

The conversation continues on ‘Your Theme’, a thundering descendant of ‘Hyper Enough’ that stays playful even in its sadness. Again we’re in the world of song (“the music drifted down across the sea”) and again we’re drawing parallels between the heartfelt love for a person (“What I’d do to waste an afternoon with you”) and the love of music itself – you’ll not have heard a more wonderful, melodic demand then “What’s your theme? / Sing it to me” in a good while.

The record peaks with the glorious, bronzed, anthem of acceptance and joy ‘Low F’. As well as being the best Dinosaur Jr tune never written it’s also the most open-handed, generous and warm song the ‘Chunk have slammed out in a long time. It’s a song that’s a little bit about singing, a little bit about love, a little bit about the past. It’s what Superchunk do best, Laura Ballance’s bass bouncing and lunging through a track that, were you to allow yourself to be naive enough for a few minutes, would have you believe that summer is forever.

It’s on tracks like that and opener ‘Overflows’ that you start to thinking, perhaps remembering, what rock n roll is capable of, what a seemingly old-fashioned four piece set-up can do when the melodies, the memories, the intent and the design are so very strong, so accomplished, so heartfelt. Indeed it’s on ‘Overflows’ that we get the line that defines the album, McCaughan screaming “Don’t let go – Let go!” in all its contradictory glory.

The only opportunity the album has to go wrong is on ‘FOH’ – a cute little tour tale that has the potential to come across as indulgent and band-centric that’s saved by an heroic lead line and nursery rhyming hooks as sweet and direct a hit as cold cola.

The frantic, double speed post-hardcore of ‘Staying Home’ is balanced by the lengthy closer ‘What Can We Do’ (No question mark, of course) which opens out bright and wide, Jim Wilbur’s guitar glistening as Mac comes to a few conclusions – “Some people go through life / all they see is red lights / but we don’t want to live like that / get tied up, get trapped” as the track builds, climaxing with the irresistible “I’ve got wrinkles around my eyes / I’ll say I love you I won’t say goodbye”. In the end of course they don’t hate music, they’re not even sure what they were thinking when they said it.

Superchunk have made a record that ties experience to the present, instinct to wisdom, youthful vigor to aged knowledge, everything in the world to a passion for music.

I Hate Music will be a companion album for those who find themselves wondering recently if they might have fallen out of love with rock n roll. The answer is delivered loudly – you haven’t, you never will, with Superchunk around it’s not fucking possible.