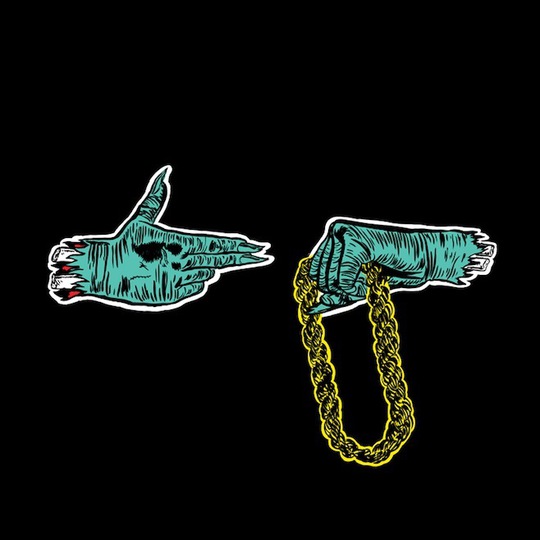 Killer Mike and El-P have spent a full year ridiculing the idea that their partnership wouldn't work. It’s been a slow but comprehensive shaming, beginning with the El-P-produced haymaker R.A.P Music ­– one of 2012’s finest records – and continuing as the pair enthused about their working relationship at damn near every opportunity they had. By now it’s clear that what was once billed as an unlikely coming together has transcended mere collaboration; this is a mutual love-in; a kindred alignment; a friendship.

Run the Jewels, then, feels like the victory parade for rap music’s freshly crowned tag team champs. Although still in their infancy as a group, they've quickly developed a chemistry that would rival The New Age Outlaws. What’s more, they've got the clout to match The Acolytes, the combined experience of The Hart Foundation and the nimbleness of The Hardy Boyz. They’re The Dudley Boyz before Spike turned up. They even sound a bit like wrestlers; Killer Mike, the fearsome brawler-type with a mean clothesline, and El-Producto, the technician with an arsenal of wicked submission holds.

Those holds – or beats, if we’re going to drop this tired metaphor – slide Run the Jewels neatly into El-P’s comfortingly uncomfortable groove. From the rumbling low-end of the titular opener, the thumping kicks of ‘Get It’, to the sci-fi synths on ‘DDFH’, we’re back inside his world and boy does it feel good. There’s no let-up this time around either, no interludes or extended jams, just 33 minutes of taut, full-throttle rap music aiming straight for your gut. Verses come densely packed with proud boasts and even prouder threats, dancing on windpipes and slicing through jazz hands. And if you think that’s imaginative, El claims the record has yetis emerging from the woods just to cop it, worker ants chewing the head off their queen, and priests removing “the cock out of their mouths to hum along when the chorus drops”. Ahem.

Killer Mike also sounds typically fired up – when doesn’t he? – but his rage is mostly channeled into playful battle raps rather than the broader political themes you'd expect on one of his own albums. He's still gnashing his teeth about one thing or another – sometimes literally, as he likens himself to Nineties Mike Tyson on 'Job Well Done': "I'm so motherfuckin' grimy, so motherfuckin' greedy, gritty / Mama said she couldn't breast feed cause I was bitin' at the titty." 'Sea Legs' is also satisfyingly combative, taking a swipe at Ye and Jay that's more enjoyable than anything on Watch the Throne ("Niggas will perish in Paris / niggas is nothing but parrots.") The heads of rap royalty are buried too deep in their own albums to even notice a jab like this, but if they looked in the mirror they'd notice their crowns have been knocked askew – if not clean off of their heads.

The more you listen to Mike and El on record together, the more convincing their partnership seems. El-P doesn't lace Run the Jewels with the southern fried flourishes scattered throughout R.A.P Music, nor the sprawling sonics of his solo works, but the duo is having too much fun to care about the winks and the nods. They have the dynamic of a vintage rap twosome, complete with the vocal cues and set-up lines that you just don’t get from artists operating out of different studios. Of course, these two are capable of a much wider range of songs and ideas than those on display here, but they’ve refined their scope to create an album that you want to blast out of your car, your house party — or ideally a boombox having been transported back to a street corner in Eighties New York.

In Mike’s own words, this is real bad guy shit – with take home messages like 'Do Dope, Fuck Hope' and a particularly sleazy, cartoon cameo from Prince Paul. He plays the Segway-riding troll Chest Rockwell, who actively baits us with his threats of artificial insemination and slipping half a molly into a poor girl’s Mountain Dew. It’s a line that’s purposefully included here post-UOENO, questioning the industry’s seemingly random criteria for what constitutes a rap scandal. Big Boi is the other major guest inclusion, whose verse on ‘Banana Clipper’ is predictably solid, but doesn't excite as much as a meeting between El-P and Daddy Fat Sax should. Let's hope this isn't the last time these two meet on record.

Critics may well point to other weaknesses; there are a few rehashed ideas, and in some cases, flows that are swiped directly from last year’s albums. But this was always going to be a companion piece to 2012’s output, and a full reading of the lyric sheet should dismiss any accusations of laziness. Both Mike and El save their best verses for last too, as the superbly titled closer ‘A Christmas Fucking Miracle’ seals the record emphatically. Gazing down at younger versions of themselves the pair offer assurances that independence will see them right – Mike again flagging the dangers of false idols, while El puts an arm around himself, “Don’t fret little man, don’t cry, they can never take the energy inside you were born with.” That fire still burns in the belly of both of these men, and their union has only added fuel to the flames.