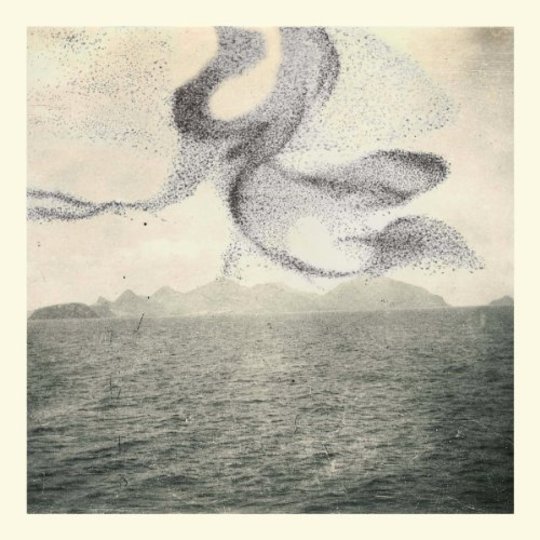 Darkness is everywhere. Both literal and metaphorical, it creeps unbidden into the world and envelops its subjects completely. The 'black wave' of which Elizabeth Wurtzel spoke was a source of both terror and comfort, something that Snow Ghosts seem to utterly understand on A Small Murmuration.

Ross Tones and Hannah Cartwright have found an ideal home in Fabric imprint Houndstooth. They share some DNA with labelmate House of Black Lanterns, but twist Dylan Richards’ sci-fi house into something altogether more sinister.

The band's shared love of folk and metal is immediately apparent on album opener 'The Hunted.' It evokes forgotten metalcore act Scarlet's 'Obsolete' in its scene-setting; tension with no release, while static hiss rises to overtake the vocal in a tale of irreversible actions.

'Murder Cries' arrives on a wave of Dillenger-esque fury - its shadowy presence adds another layer to the developing gloom. String arrangements emerge through percussive stabs that again look to metal, this time echoing the doomy, drop-tuned palm muting of Pelican's Australasia. Rhythms clink like ice cubes dropped into a glass, while Cartwright's lyrics speak of feathers, bone, blood and dirt. The murder of the title isn't just of crows, it would seem.... Around the halfway mark a lurching beat intrudes, transforming the track into a jerky, terror-dance creation made all the more unsettling by its Kill List-referencing video.

The melding of acoustic instruments, heavy bass electronics and metal leanings has the potential to create something incoherent, but the sequencing is designed so each new element arrives at the right time. That's not to say this album is for everyone. Its bleakness is relentless—within both music and lyrical content—which may be too much for some to bear. Not everything is a success, either. 'Gallows Strung' may aim for the same murky depths as 'Murder Cries,' but its impact is lessened by a chorus which veers far too close to Annie Lennox. Once you've heard Lennox, you can't un-hear her.

'And The World Was Gone' brings the album to a close. A field recording of a thunderstorm permeates the song, pinning a real sense of unease to a nagging acoustic guitar riff, cello and Cartwright's most affecting vocal on the entire album. It's a wonderfully-executed combination that should end the album on a real high note.

Actually, it's not the final track... Instead, 'In The Deep' arrives to close out ...Murmuration. A sonic experiment akin to Amon Tobin's Isam album, it adds nothing in this instance and feels out of step with everything else. Also, there’s a lyric on 'And The World Was Gone' that is integral to the success of the piece. It opens and closes the song, features the title and ushers in the full instrumentation: “you said you'd wait forever/but I blinked/ and the world was gone.” There's nothing wrong with it at all, but after its first appearance Cartwright resorts to the present-tense “blink” while retaining the past-tense “and the world was gone.” It's a minor gripe from a pedantic bastard, but it has the same Lennox-factor as before: once you're aware of it, it's all you can hear.

However, the fact that this review is reduced to criticising the artist's confusion of tense shows just how good this record is. If Martin Grech ever records a follow-up to his underrated March of the Lonely LP, one suspects it would sound like this.

...Murmuration’s darkness is a source of foreboding, curiosity and yes, comfort. It's Gothic in the medieval sense of the word; all dampened drums and echoing vocals that cower under ribbed vaults and pointed arches. The fact that it's being released in the middle of summer only adds to Snow Ghosts' very English sense of despair.