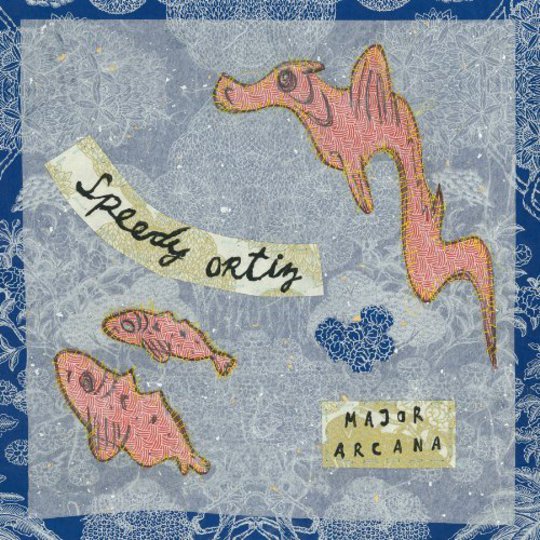 While all this might suggest an exercise in academia - maybe not all that far off the mark - the connotations feel misleading: less hard, hoarse and mathematically limber than their Boston peers, Speedy Ortiz (pronounced Or-teez) seal their intelligence with restraint. Major Arcana is a dense labyrinth of can’t-catch-me riffs and writhing vocal lines that tumble in waltz and 4/4 time. Rejecting attention-stealing time signatures and favouring pumped choruses over tricky breakdowns, the record conveys a sense of ledge-grasping urgency. As tested pop signifiers catch your ear, fast ideas batter against the structural constraints, a tension between anthemry and atonality, maximum energy and flair crammed into tight borders. Looking beyond obvious Nineties touchstones - Built to Spill, Juliana Hatfield, Slint - there’s a vague lineage to be traced back to Richard Hell & the Voidoids, as brainy lyrics jostle among loose, loopy rhythms that mimic an untidy mind.

Where all this leads is a kind of speed-riff slumber party. If nothing else it gives an idea of what late-Nineties Heatmiser might’ve sounded like upon reinstatement of Elliott Smith. The “sycophantic academy” at which ‘Casper (1995)’ sneers is pure Smith, as are the double-tracked, deftly flourishing guitars of ‘No Below’. Mercifully, any shyness finds succour in patiently deferred power-splurges that wouldn’t wince at a Nevermind comparison, albeit via Keep It Like a Secret. Indeed, within Major Arcana’s slightly restrictive Nineties universe there remains a hint of diversity, ‘Cash Cab’s post-hardcore guitars wriggling and pivoting like balletic earworms hopped up on adrenaline, while ‘Pioneer Spine’ ambushes fraught passages with blistering, burst-out choruses. Closer ‘MKVI’ ascends majestically, across its seven minutes a sense of release that neatly suits lyrics about a subconsciously sabotaged relationship, Dupuis’s guilt transfigured as righteous scorn.

Despite the band’s protestations - 'I'm kind of like a third-grade poet,' Dupuis told Rolling Stone, 'I try to have some sense of humor' - the songwriting is deceptively sophisticated, something in the lyrics evoking fractious childhoods and suppressed fantasies without seeming too self-harmy. “I want your name - just write it, that’s fine”, she purrs on “Pioneer Spine’, as if disobedience would be gravely inadvisable.

Ultimately Speedy Ortiz’s ingenuity relates not to innovation but something altogether more sacred to this genre, namely the expression of knotty emotions in alluring terms, at once esoteric and specific-seeming. While Dupuis leaves telling space between what’s said and what’s felt, her own outsider universe never excludes the listener. It’s packed with difficult sentiments that have been brewing unspoken just long enough to acquire some inexplicable potency, steeped in the poetry of repression.

We’re tipped off to Dupuis’s capability on ‘No Below’, the most lucid and brilliant of Major Arcana’s consistently high-quality cuts. In another Elliott Smith-studied quirk of technique, it flips a loner-finds-lungs chorus with revealing modifiers: “(Yes I once said) / I was better of just being dead / Better off just being dead... / But I didn’t know you yet”. From such nigglingly touching moments surface nigglingly great songwriters, and despite the glum facade, Speedy Ortiz are way too euphoric and glorious to suffer for their artfulness. Stripping away the frills, at heart Major Arcana is a mournful treasure that asks to be celebrated.