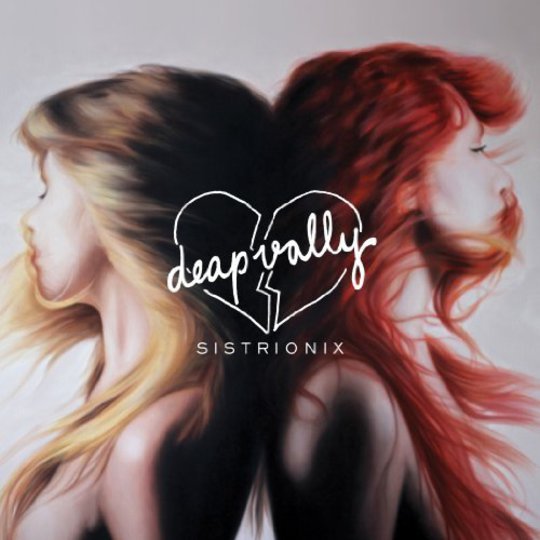 Californian rock duo Deap Vally tend not to wear a huge amount of clothing, something that seems to have caused a low level tizz in some corners of the indieverse. I guess I can see both sides of the argument – on the one hand they should clearly be allowed to wear what the fuck they want, and it seems to me like there's something uncomfortably akin to slut-shaming in the more vehement criticisms. On the other hand, there's surely something calculatedly attention grabbing about it all, and I suppose if you’re the sort of person who finds Anthony Keidis and Flea trooping rounding the semi-altogether a bit off-putting, it’s only consistent to extend that to the ladies.

In any case, I know a couple of people who seem really angry about Deap Vally; maybe it's just them and it's actually not that big a deal. But for what it's worth, singer/guitarist Lindsey Troy and drummer Julie Edwards strike me as alright – they’ve addressed the objections reasonably thoughtfully in interviews and their debut album Sistrionix has a sort of spiritedly pro-sisterhood, pro-doing-what-the-fuck-you-want vibe to it that’s fairly crude but palpably genuine. If they’re guilty of anything, I suspect it’s being excessively Californian.

Whatever the case, it would all surely matter a lot more if either a) Deap Vally made brilliant music or b) Deap Vally were hugely popular. Conceivably those are both things that may happen at some point in the future, but Sistrionix is a long way from greatness, a plodding blues rock album that’s crafted with great vigour but little invention.

In some ways the duo fall into the exact sonic trap that fellow guitarist/drummer duo the White Stripes avoided a decade or so ago. It’s not that Deap Vally's music needs bass, it’s that it needs nuance – Sistrionix has a very limited sonic palette, Troy’s guitar playing efficient but devoid of the sort of spirit of adventure that might have given the whole thing some much needed colour.

Opener ‘End of the World’ sets the tone – it’s nearly five minutes long, ploddingly paced, and almost resolutely monotonous – for most of it Troy plays a single fuzzed chord, occasionally unleashing a low, sludgy solo. It’s the lengthiest song on the record, but the trouble is that with little variation in tone or tempo, all the rest blur into it. ‘Baby I Call Hell’ lumbers in on a plodding, brutally basic riff; ‘Walk of Shame’ again indulges in a staccato chug; ‘Make My Own Money’ is livelier but essentially sounds like a dimmer cousin to the White Stripes’ ‘Blue Orchid’; and so on and so forth. The riffs are big, forceful and no frills, kind of Tesco Value hard rock. And there’s something to be said for that, but a whole album’s worth of it is like having the same plain, heavy meal every night for a week.

It’s a shame because under the chugging there’s something enjoyably punk rock about the pair. Troy has a battering ram of a voice that maybe lacks total distinctness, but is, nonetheless, pretty cool – she’s clearly modelled her impassioned yelp on Robert Plant, but there’s some Karen O, some Jack White, some Carrie Brownstein in there too, a certain sense of slightly unhinged abandon that’s unfortunately suppressed by the molasses slow music. And eye-rolling as some of the lyrics are, one gets the impression they’re being rather tongue in cheek about it all (how else to take lines like “I got rhymes they’re so catchy they’re venereal”?).

In the end, though, Sistrioinix is simply harder work than it should be. Some songs are more fun than others – ‘Lies’ really isn’t miles away from sounding like Fever To Tell-era Yeah Yeah Yeah - but the only real moment of respite is an untitled a capella number at the end. It’s raw and uncontrived and just something a bit different, a hint that there could be a more to this band’s music than plodding primary riffola. But it’s not enough, really – after all the naysaying I honestly think Troy and Edwards come across as musicians of integrity, but that’s not the same as being any good.

Sistrionix could be a foundation for something much better or something infinitely worse, but for now Deap Vally don’t particularly deserve your hate or your love.