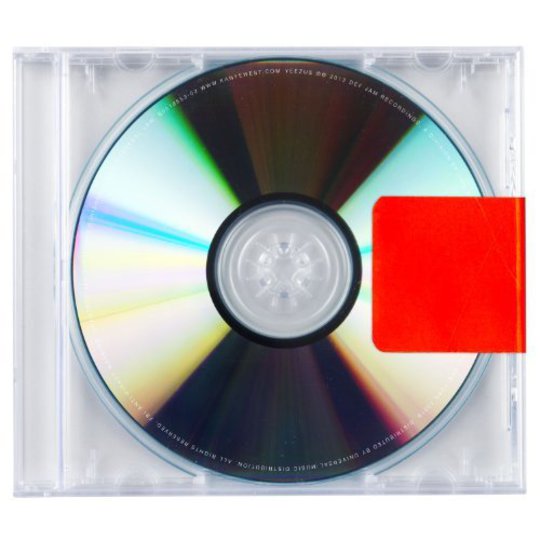 Ah, to be a fly on the studio wall during the making of Kanye West’s Yeezus. This is an album that is actively trying to sound imperfect, and yet the number of producers, engineers, songwriters and professional fluffers that went into manufacturing that aesthetic is astounding. We’re told that the infinite wisdom of Rick Rubin’s beard was drafted in with less than three weeks until deadline, and he claims even at that stage he was given three hours’ worth of only partially finished material to work with.

In short, the making of this record sounds utterly chaotic, which was conceivably part of Kanye's plan all along. In what other conditions could he have produced an album as rash, dramatic and hot blooded? Or even, who else operating at this level in popular music could have made something so simultaneously provocative and vital sounding? Only Kanye; barking out orders in his leather skirt, as his crack team of producers scrambles around desperately trying to pull the zeitgeist out of their MacBooks. 'Reverse that snare drum!' he shrieks, 'This synth needs to sound, like, 200 per cent more now.'

It’s easy to poke fun at Kanye, but Yeezus is his way of prodding at hip hop’s flabby belly, then running behind it and yelling 'Look what I can do!' in its ear. This is an album that’s got Daft Punk producing no less than three songs, a sample clearance of ‘Strange Fruit’, and Chief Keef singing a hook alongside Justin Vernon. He’s surprised us before, of course; just look at the dance/rap fusion of Graduation’s ‘Stronger’, the icy sadness of 808s and Heartbreaks, or the sheer enormity of vision on My Beautiful Dark Twisted Fantasy. But even in a career of left turns, Yeezus is shocking. At times, it’s dense to the point that it’s rendered intentionally difficult to listen to. Kanye has spent his last few records cuddling up to us with sonics, just so enough people care about him that this one will make an impact.

Make no mistake, Kanye’s gravitation towards the brutalist, industrial arrangements of ‘Black Skinhead’ and ‘New Slaves’ is him demanding to be listened to. The consumer and race politics tied up in both of these songs are not the radical departure they’ve been described as, that goes as far back in Kanye’s career as The College Dropout (‘All Falls Down’) and Late Registration (‘Crack Music’), and as recent as Watch the Throne (‘Murder to Excellence’). But by removing the joyful samples and head-nodding beats of old, Kanye elevates the power of his message. ‘New Slaves’ is strongest of all; teeming with anger and self-hatred, it says that society’s culture of aspiration is rewardless and manipulative - and that’s from a man who knows it better than most. Yes, Kanye might be the living embodiment of what he’s rallying against, but what better spokesperson could anti-consumerism possibly have?

Kanye’s anger and self-loathing doesn’t stop there; it’s infused in so much of this often extremely ugly record. For starters, he’s ejaculating all over Yeezus – on mink fur, naked flesh and Hampton spouses – running desperately away from monogamy and adulthood with his pants around his ankles. Crucially, he's fusing the political with these personal conquests, playing up to racist stereotypes of the animalistic black male by using violent, uncomfortable imagery. He’s fucking us in the eyes and he’s eating our asses.

To the black girl drinking white wine - "I put my fist in her with the civil rights sign". He invites us to come and ogle at the freak show, just as he described earlier with the vivid King Kong imagery of ‘Black Skinhead'.

It wasn’t so long ago that he was crying out for the comforts of parenthood and a meaningful relationship, but people have short memories when it comes to Kanye. He’s calling us out on our prejudices, and in the process he’s deflecting attention away from the woman he loves and his newly born child. Just like he told the New York Times last week, 'I just don’t want to talk to America about my family. Like, this is my baby. This isn’t America’s baby.'

Unfortunately, despite the shock and awe surrounding the SNL performances, the absence of a radio campaign and the bare album art - Yeezus does sag in places. Sure, there are arrangements here to get excited about and that have the potential to move people - but songs like ‘Guilt Trip’ and the King L-featuring ‘Send it Up’ just feel severely underwritten. Then there’s ‘Blood on the Leaves’; a track that mashes up TNGHT, C-Murder and Nina Simone’s cover of Billie Holliday’s ‘Strange Fruit’ – and for what? Kanye managed to authorize a sample of one of the most beautiful and sacred gestures in the history of civil rights, and used it so he could take a shot at groupies and alimony payments? That’s enough to distract me from however hard this beat bangs. The thing is, Kanye is almost definitely trying to say something else with this sample choice – he’s too conscious of the song’s weight, re-iterating fragments of it much more appropriately on ‘New Slaves’ – but whatever point he’s trying to make has been garbled.

His other sample choices and guests are much more rewarding. ‘Hold My Liquor’ plucks Chief Keef out of Chicago’s Englewood area – one of the most helplessly fucked up communities in all America – and has him singing on its desperately sombre hook. “I can’t control my niggas,” he drones through the autotune, “And my niggas they can’t control me” – he’s singing from a place that has been left to rot by his government, and Kanye is purposefully aligning himself with Keef as a way of telling us he feels that it’s not just George Bush that doesn’t care about black people. Meanwhile he’s cranking up the record’s pressure through samples of other traditional forms of black protest music – from Jamaican dancehall to Chicago house.

Funnily enough, the headline grabbing ‘I Am A God’ feels like light relief by comparison; a hysterical bit of wind-up fun that sees Yeezus meeting with Jesus (“He said whaddup Yeezus?”), and getting impatient over delayed croissants. It might not have any proper rap beat to speak of, but this is the most fun Kanye is having on the record – trolling the public and sitting back to watch the memes being created.

So, where does this leave Yeezus in the pantheon of Kanye West albums? It’s certainly his boldest, most provocative record in a career as a bold and provocative musician. Its political backbone will gradually become appreciated and with time and it may even become canonised as Kanye’s most important record. A great deal of its power comes from the height of his platform, giving this album a significance that better, more articulate records will never get close to. Under closer scrutiny, a three song lull holds it back from being as powerful as it might have been, but I’m happier listening to this flawed, fumbled and underdeveloped Kanye record than I am a thousand other records that came out this year and didn’t even try to change the world.