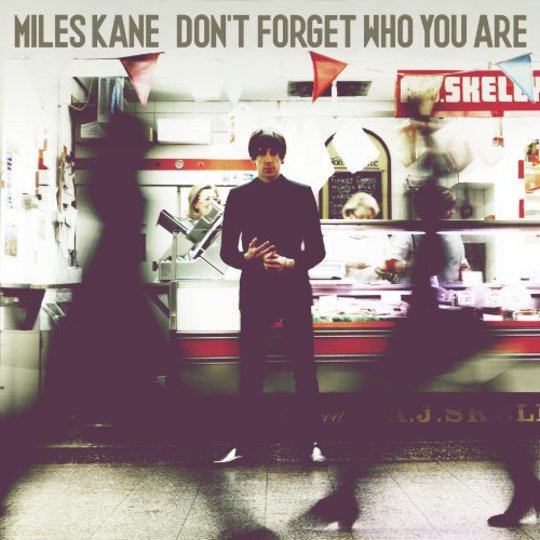 You've found the perfect pair of trousers. It's taken some time perusing the aisles of the high street retail chain, but finally you're ready to brave the changing rooms. The bloodied fingers of child labourers are a fleeting concern, one which dulls as you pull the trousers on and realise they go great with your new shoes. At that moment, in the mirrored cubicle, as your mind refocuses, you finally acknowledge the soundtrack that’s been swirling around you from the in-store speakers. You can't quite make it out, but you feel an overwhelming sense of déjà vu; it’s an indeterminate guitar driven stomp n' snarl, it's the sound of a thousand retail parks, it's the sound of Miles Kane's new album.

Success first came to Kane as one half of The Last Of The Shadow Puppets, a collaboration with Alex Turner that avoided exhausted British guitar pop cliches. Taking cues from the Sixties recordings of Scott Walker and Joe Meek, it united style and substance into an understated album of intelligent pop revivalism. Kane's solo debut, The Colour Of The Trap savoured the taste of this collaboration but, despite a warm critical reception, failed to propel him out of the shadows. A solid introduction to his ability at crafting catchy, hook-laden retro pop, it never quite convinced as a lone venture, with half of the album still co-written by Turner. So with the release of his Ian Broudie-produced second album, Don't Forget Who You Are, it seems he needs to light a fire in the dark.

'On this record I wanted to be direct. I didn't want to disguise anything with metaphors or anything' said Kane in a recent interview, and true to his word, from the jagged guitar fuzz of opening track 'Taking Over', his previous lush control has been jettisoned in favour of a heavier, unambiguous Seventies rock sound. When it works best, on floor-shakers like title track 'Don't Forget Who You Are’ or closer 'Darkness In Our Hearts' the wailing guitars, trill screams, slick paced rhythms and chaotic rock and roll feel like a treat just waiting for eager live crowds to unwrap.

Kane’s enthusiasm pushes the album along at a relentlessly breathless rate, but enthusiasm can only take you so far and soon tolerance for his vapid and riff-tackular new sound wears thin. Tracks like 'Bombshells' or 'Tonight' begin in interesting sonic territory but burn out on their own lack of substance, the former with lyrics that feel like you're at the epicentre of an explosion in a rhyming dictionary factory; "This world keeps on rotating and it's always changing who we are/I can see that the past is fading but the future's waiting in a star". ‘Better Than That’ and ‘What Condition Am I In’ try hard to maintain your attention, with their head nodding beats and tight harmonies, but only succeed in blurring into forgettable tail-chasing cliche. The album's nadir finally comes in the shape of 'You're Gonna Get It', a co-write with Paul Weller, that tries very hard to exude rock swagger, but is hobbled by an unnerving similarity to ZZ-Top's 'Sharp Dressed Man' (albeit one in mod clothing). All pomp and no ceremony

It’s not like Kane’s lost the ability to write intelligent concise pop, he more than proves that on restrained tracks like, 'Out Of Control' with its low-key orchestration and Ian Hunter-esque vocals or 'Fire In My Heart', a fleeting piano led lament and album standout. It’s just that on Don’t Forget Who You Are he and his new collaborators have turned everything up to 11 in a transparently concerted effort to throw him into the spotlight, but in setting him apart from his previous work he’s lost many of the idiosyncrasies which made him interesting. “I’m not like everybody else” he sings on the title track, but this album only serves to make him more indistinguishable from the pack; another Kasabian, another Beady Eye, another high street, another pair of trousers.