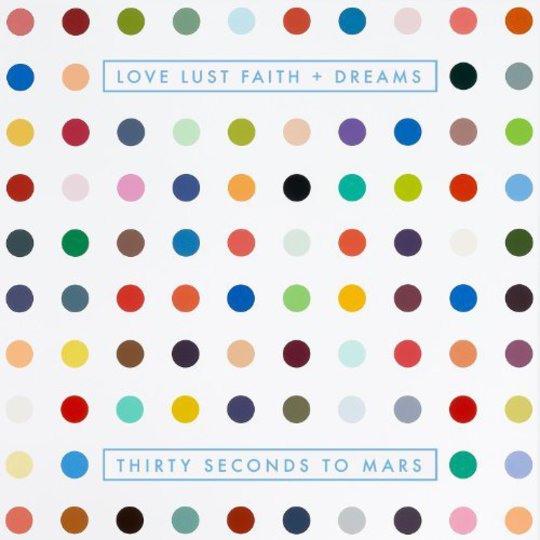 Jared Leto can't save you. Let's get that out of the way immediately. He can't save you any more than he can bring about world peace, turn water into wine or part the Red Sea. And whilst his rockstar messiah posturing is nothing new (although his philanthropy and support for gay rights in America is admirable), 30 Seconds To Mars' endless lyrical platitudes and 'you-are-not-fans-you-are-family' sloganeering can grate. But none of that mattered until now, because what Jared Leto could do, and do incredibly well, was compose/perform gorgeous alternative rock whilst looking gorgeous himself: he possessed the two vital prerequisites for pop superstardom in spades - good looks and big hooks. And while time has done little to diminish his faunlet-like androgynous beauty, sadly it does appear to have neutered his muse.

LOVE LUST FAITH + DREAMS has been engineered to make it appear grandiose, an album imbued with deep meaning and importance; the cover is Damien Hirst, the title is ALL CAPS, the artwork for first single 'Up In The Air' brazenly referenced Hum's Nineties space-rock classic You'd Prefer An Astronaut, and was subsequently literally sent into space. Whilst 30 Seconds To Mars have always traded in the sweeping and spectacular - their music videos, directed by Leto himself, are masterful, hyper-stylised mini epics - all the high profile perimetrics feel decidedly over-compensatory this time around, as LOVE LUST FAITH + DREAMS itself is a disappointingly tepid affair.

The loose, exploratory sci-fi metal of their decade-old self-titled album is long gone, and the tightly coiled, electro-tinged post-hardcore of 2005's A Beautiful Lie has also been jettisoned. What remains is a dilution of the billowing, expansive rock that constituted the core of their divisive 2009 global smash This Is War: The guitars have been traded for synths, the melodrama hiked up to unbearable levels, and the palpable energy found on previous albums is glaringly absent.

First song proper 'Conquistador' is a weird Brit-rock stomp with a recycled opening riff reminiscent of Kasabian's 'Shoot The Runner'. It fails to resonate, and the endless 'woah-ohs' and chants of 'we will rise again,' grow tiresome. 'Up In The Air' briefly crackles with life; the verses driven forward by a barrage of pulsing synths and Leto's emotive wail, but the chorus is a stuck round and fails to set the song alight. Third song 'City Of Angels' is the nadir; a limp, soulless slab of soft-rock that even Gutterflower era Goo Goo Dolls would consider toothless. It pales in comparison with previous career highlight 'Hurricane', a ballad that managed to be tense, slinking, sinister and uplifting (add 'incongruous' and 'brilliant' to that list for the version with Kanye) all at the same time. The rest of LOVE LUST FAITH + DREAMS is divided between overwrought, empty balladry ('End Of Days'), uninteresting - if pretty - interludes ('Convergence') and half-baked synth-rock ('Do Or Die').

There was a time when 30 Seconds To Mars could justifiably be compared to Deftones and Hopesfall; never as dark or critically-acclaimed as the former, and lacking the chaotic originality of the latter, 30 Seconds To Mars held their weight with sheer energy, and hooks more infectious than a viral hemorrhagic fever. But now that's been dialed back they sound like empty vessels. Which they always were - but they traded on the age old maxim 'It is not what you say that matters but the manner in which you say it.' When Jared Leto was screaming "I'm not saying I'm sorry/ One day I'll think we'll make it" atop rapid-fire drumming and duel chiming guitar lines, 30 Seconds To Mars may have been communicating little, but by God they sounded fantastic. Now, they merely sound trite.