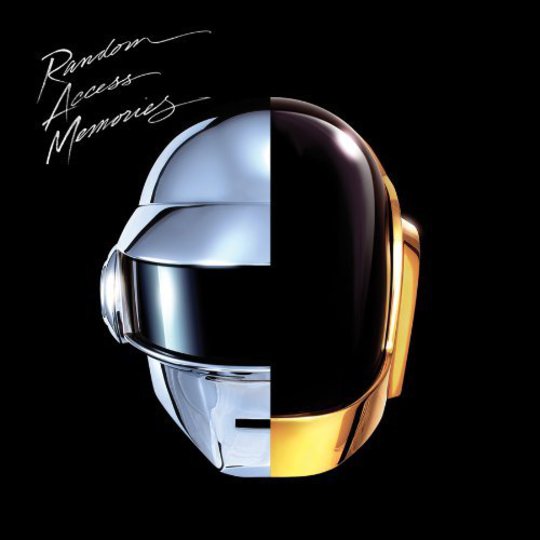 We've all had those nights out. You know it happened, but you've no idea how. Well, that's a bit what listening to Daft Punk's Random Access Memories is like. That is, if you fell down the disco rabbit hole into a synth-funk dominated Wonderland.

You're getting ready for your night out somewhere in 1979, when 'Give Life Back To Music', with its clean instrumentation and distinct lack of electronic mayhem, pops on the stereo. It's just the right groove to soundtrack the doing-your-hair part of your evening. It gets you ready for whatever the night might bring. It could happily sit on Off the Wall, although instead of Michael Jackson on vocals, it’s a soulful vocoder. Then you imagine what could have happened if it had been possible to get Jackson, possibly singing through a vocoder, and you think: that could've been amazing. But this is kind of good too.

On your way out, you’re listening to the melancholic 'The Game of Love'. This night out is taking far too long to get going, an unacceptably long time in fact. It's about now you start thinking, 'Hang on - this isn't anything like Discovery, I didn’t sign up for this.' But oh look there's your ex, heading to the same place - yeah, that one, "the one who would be breaking my heart". So now you're expecting the night to end with crying into your cocktail, because it's the kind of night that has cocktails. You arrive, and this is where it starts getting weird, because now Giorgio Moroder is telling you his life story. Not only that, but Daft Punk are retelling his life through their music. And it is amazing.

That's when you realise you're travelling through Daft Punk’s Abridged History Of Dance Music. It only gets stranger from here.

You're still in the Seventies, and what trip there would be complete without techno-existentialist lounge music? So there's Chilly Gonzales creating a gorgeous piano motif, and a philosophical sentient robot pleading with you to "please tell me who I am". Unfortunately you can't really help with that, and it’s really not helping the night-time vibe, so you follow Julian Casablancas to ‘Instant Crush’, where CBGBs meets the discotheque. It’s nice, but you're still thinking 'er, not really sure what’s happening here, might just get my coat'.

Then you stumble into 'Lose Yourself to Dance', where it all finally starts making sense. Driven by pounding drums, thrumming basslines and actual stardust, you're graced with the presence of Nile Rodgers and Pharrell Williams dishing out classic funk. For the first time since you arrived, you actually have to dance. That's what this music was made for. It's over too soon, interrupted by Paul Williams lamenting memories past, the aftermath of a hedonism you've only just begun to experience. This is where past meets future, sci-fi somehow meets Disney; at its centre, a man who's seen and done too much, too long ago now, acknowledging life’s one truth - "if love is the answer you're home". You'd love to stay and listen to the memories; the future makes no sense without the past. But this trip waits for no man, not even Paul Williams.

So you’re pushed onwards into that almost familiar world of 'Get Lucky'. But the pleas of "I need something more" are still echoing in your ears, despite how fun Nile and Pharrell are to hang out with. Apparently the robots agree, because 'Beyond' finds them singing about love, dreams and being "the light behind the cloud". Still, you think, it all sounds much warmer and, well, more human than the clinical Human After All. It almost feels like reality again - until 'Motherboard' throws you into the space where the ethereal crashes into the futuristic, a war caught half-way between night-blackened cities and the clouds. Between the bass, guitar, synths and flute, you've maybe never felt more alive than this.

All too quickly it's back to Earth with a bump, specifically California, on 'Fragments of Time', with Todd Edwards reminding you that the reason experiences "turn our days into melodies" is because they end. It's a final nostalgia trip before the future arrives on the fully electronic 'Doin' It Right', with Panda Bear’s mantra that "if you lose your way tonight/That's how you know the magic's right". Well, your way has been lost; the universe of Random Access Memories, an album that can only be taken as a whole, is a maze unlike much music existing now, with only one way out: up. After the sometimes frustrating, frequently exhilarating journey, the thrilling, head-shattering, Captain Eugene Cernan-sampling 'Contact', manned by DJ Falcon, simply soars. With an album that literally covers space and time, is it any surprise that the disco rabbit hole ultimately leads to the stars?