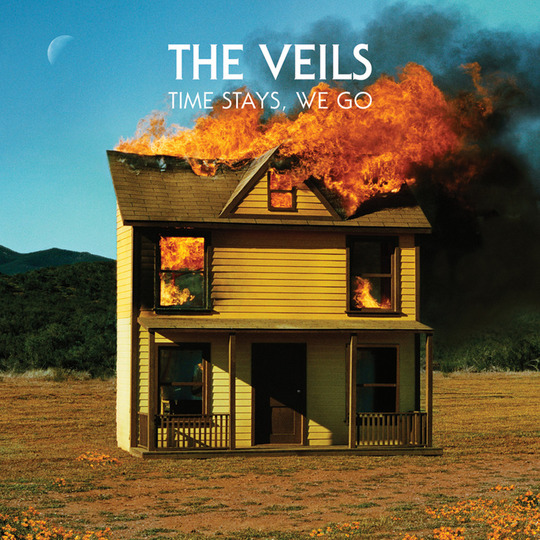 Finn Andrews has an extraordinary voice. The sort of voice that no amount of poetic language can truly do justice. Stick the words 'rich', 'husk', 'romantic ache', 'moody', 'mercurial', 'that Tom Waitsy croak Isaac that Modest Mouse has', 'bloodied', 'Buckley-esque' in whatever order you wish, cut-and-paste them around as many times as you like, but you won’t begin to describe those tones that pour from his lips. Then again, he isn’t so much a singer, rather a mystic, channelling dead-souls. It’s a similar heft you hear creaking in Nick Cave and them Badseeds’ finest blackened-blues rock & roll hymns. It makes no sense that any of this needs be said, because if there was any logic to who gets notoriety and plaudits, The Veils’ brand of uplifting-misery would be a name every skinny jean / black tee owning music fan would be hip to.

For some reason - despite the quality of their records and Rough Trade’s best efforts - they remain a band for those who’ve somehow stumbled across them. They seem like the stuff of legends, but they don't even have the status of 'obscurist cult concern'. The Veils are not-so-much Noughties also-rans, so much as 'oh, I’ve vaguely heard of them, but I don’t think I’ve ever listened to them...didn’t they play with Wild Beasts or The Stills one time?' They’ve never had that big Hollywood / HBO soundtrack moment that suddenly flips them overground, but that also means they haven’t deviated into a smug pool of contentment, and boy-oh-boy is their music all the better for not achieving the success they surely deserve. Surviving, is prize enough.

Back in 2004 they set out their stall with the critically celebrated debut Runaway Found, cranked up the dark-rock on Nux Vomica and spread things widescreen on Sun Gangs. Then a few years back there was the exceptional Troubles of the Brain EP, which shone a different light on Andrews’ abilities to pen radio-friendly pop-rock (he’s got pedigree as he is the son of XTC’s Barry Andrews).

Recorded at Seedy Underbelly Studios in LA’s famous Laurel Canyon with producer Bill Price (who previously produced The Jesus & Mary Chain and The Clash), Time Stays, We Go is a progression of everything that came before. They've evolved the moonbathing, rose petal-scented gothic romance of earlier releases, and let the heat raise the intensity and the gorgeous sunrise brighten the mood (although is the sun rising or setting or the glass full of air... do you even care?). On ‘Turn From The Rain’ there’s cheery, almost happiness in the air as a ukulele jangles in a way that wouldn’t be out of place on a sprightly Beirut pop-song - although it somehow manages to retain a trace of Finn's intense maudlin doomed soul, like a cracked smile. ‘Dancing With the Tornado’ is a barn-storming slice of angular, jugular-grabbing, bat-slugging, post-apocalyptic bar-brawl baroque-pop (fans of Man Man will hopefully know what I’m talking about). At the climax of ‘The Pearl’ things even go a little bit Talking Heads funanigans, as Finn begins a “try to keep real calm, try not to shake drinking arm” mantra, but any trace of funkadelic Eighties foot-stomping soon fades to black...

Meanwhile, the gorgeous strings on ‘Train with No Name’ give way to an undeniable groove. It’s a groove that’s a little bit bruised, sure, but this ain’t insular bedroom-dweller music for mopey Cure fans, you could - if you were so inclined - sling ‘Train with...’ on a mix with Interpol’s most party-friendly club-thumpers. Don't be shocked to find this rumbling over a sports montage or closing some armageddon action flick. Similarly, album opener, ’Through the Deep, Dark Wood’ shudders, skitters and shimmers, and only the strong-willed won’t succumb to air-drumming before this bastard is done with you.

Time Stays, We Go seems eager to dispense with this damned world. It's a record that drives through suburban hells and dead-end towns leaving nothing but flames in its wake - that's not to say it's indulgent, it just isn't a record compromised for entertainment purposes. There’s a devil may care ‘tude and more than a hint of oblivion-gazing about most of the record, but there’s still some of that slumbersome balladry (almost all of it eventually erupts before strolling off into the moonlight) and inward-looking, dark shadowiness.

Misery is too strong and pointed a word for it, but for all the hope and hummability of Veils' fourth full-length, it seems you can ship the boy dressed in black to sunny California, but you have more chance of making him wear some shorts than extracting - or at least distracting - the misanthrope on his shoulder. There are lyrics about black balloons made out of lead, deserts piled with snow, gutter flowers and girls bodies hitting the ground. It's a record that hopes for happiness, and finds itself smirking at death.

And that's the way I like it. In fact, there’s everything here that those in the know have come to love and expect from The Veils, but there’s also a window in for the rest of you - especially those not-quite goth, dreamer-types lurking over there, I see you with your Low lyric tattoo and Yeah Yeah Yeahs t-shirt. Peer on in and you’ll see there’s a red velvet chocolate heartache cake just waiting for you to scoop it up. Be warned, it’s laced with something special, but I can’t even begin to describe what it is.