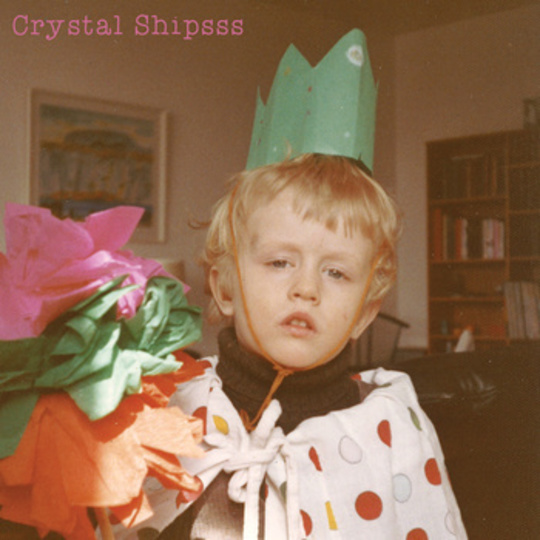 Berlin-based Dane Jacob Faurholt should be no stranger to regular readers of DiS. His most recent long player, 2011's Dark Hours, received a more than favourable review on these very pages prior to its release, drawing comparisons to the likes of Will Oldham and Sparklehorse. Take a trawl through Faurholt's back pages and it's not always been about American folk influenced lo-fi musings. While his solo records and collaborative efforts as Sweetie Pie Wilbur have mostly followed a similar pattern, his other more recent guise as Crystal Shipsss has upped the ante in terms of decibel usage.

Having started Crystal Shipsss as a solo project to showcase his psychedelic, white noise-tinted experiments, Faurholt recruited countryman William Kudahl Sorensen and American musician Evelyn Marie Malinowski shortly after. With the extended line-up in place, Faurholt and Crystal Shipsss haven't rested on their laurels, releasing an album - Yay - in just a few short months. Although still finding their feet, there's little doubt Faurholt's latest project are brimming with promise even if the finished articles so far have been decidedly patchy affairs.

Which is where this latest, self-titled release enters the fray. Consisting of five recordings, of varying degrees of quality and to a point, the EP is genre transgressing for the most part. Thoroughly DIY in its execution, from Faurholt having recorded and mixed the tracks himself to the limited edition run of fifty cassettes that accompanies the digital download, Crystal Shipsss looks and feels like a homemade collection of demos. And therein lies the main problem.

Parts of the EP resemble a rehearsal casually set to tape: opener 'Where The Wild Things Are' and the frantic 'Listening To Devil Town' being two that immediately spring to mind. What sets the latter apart is the way Faurholt spits couplets like "I hope I get home before it gets dark" over cacophonous, fuzzy guitars and a drum that sounds like it may spontaneously combust at any given second.

Indeed, one could imagine Crystal Shipsss being a brutal proposition in the flesh, such is the buoyant urgency of the aforementioned '...Devil Town' and equally laconic 'Dusty Vinyls'. It's when Faurholt and co. take their feet off the accelerator pedal on countrified rambler 'Crushing Like A Skull' and wayward closer 'Night Of The Creeps' that the EP loses focus slightly.

As a result, Crystal Shipsss resembles something of a stop-gap between albums one and two (second LP Dirty Dancer is due in the autumn) while the band continues to search for an identity of its own. Nevertheless, the signs suggest when they do find their feet Crystal Shipsss have the potential to fulfill their undoubted aspirations.

Calling from the Stars