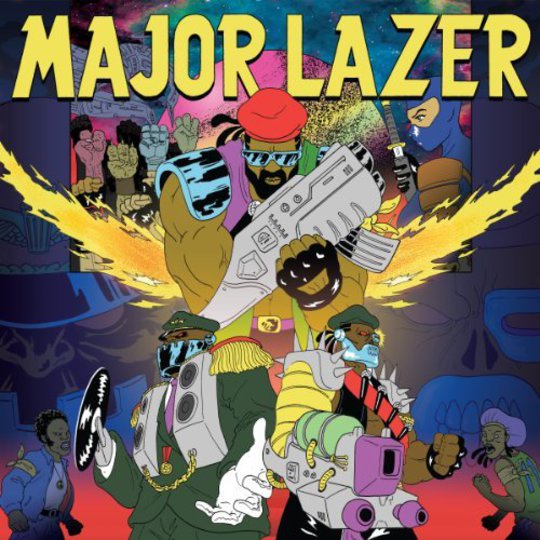 When Major Lazer bounded onto the party circuit with 2009’s Guns Don’t Kill People, Lazers Do, it was, in two words, dancefloor dynamite. London house music veteran Switch and Philadelphian global bass ambassador Diplo’s collaborative debut was a hyperactive, gymnastic concept album that flipped dancehall on its head and gave it a jolt of electro. Its Spandex-tight beats, blooping 808s, spaghetti western guitar, badman lyrics and rhythms made you want to oil your buns, slide into a neon thongkini and grind. Even Beyoncé saw its vag-wiggling potential and sampled 'Pon De Floor’s zippy siren in her superwoman anthem, 'Run The World (Girls)'.

One spin of Major Lazer’s second album, Free The Universe, and it’s clear that it’s of a very different bun entirely, the kind that hangs hairily out of low-slung jeans and threatens to meet your face as it pogos into the air at dance festivals. You can hazard a guess at why Switch left, citing 'creative differences': these days electronic music fills stadiums quicker than you can whisper ‘EDM’ and Diplo is a step closer to becoming the younger, blonder David Guetta.

Free The Universe is still, at its very core, a dancehall record, with plenty of guest appearances from Jamaican veterans like Elephant Man, Shaggy and Vybz Kartel. But it obscures the connection ever further with lacerations of Dutch house and brutalising bass and appearances from friends-in-high-places like Bruno Mars and Wyclef Jean. The abysmal 'Mashup The Dance' features Dutch DJ duo The Partysquad, whose only purpose seems to be to puncture Diplo’s tiresome carnival drums with a few lazer-blazing build-ups to make frat boys holler. 'Sweat', meanwhile, with Dutchman Laidback Luke, shoehorns sledgehammer-subtle pwew-pwews in around a Ms Dynamite rap. Heavier still, 'No Partial’s promising old-school reggae vibe flops like a gnarled troll’s belly – thanks to Brit wobblesteppa Flux Pavilion ­– into an ugly WAMP WAMP.

Despite that, there are some great moments. 'Scare Me' suggests Tiga producing Le Tigre and electroclash legend herself, Peaches, delivers a few predictably fruity verses. Songs from Amber Coffman of Dirty Projectors ('Get Free') and Ezra Koenig from Vampire Weekend ('Jessica') are lovely sun-bleached slabs of wonky reggae that sound like they’re bubbling underwater. Yet they are as if from another record entirely. Surprisingly, Bruno Mars isn’t even the worst thing on the album. He sings the lead on 'Bubble Butt', a swaggering song about sexing big booties. Its minimal hip-hop bounce is a deceivingly intricate jungle of trilling, squawking samples, and a reminder that Diplo can be one of the most talented producers of his generation.

In a parallel universe Diplo could have been the next Timbaland. His obsession with scouring the globe for unearthed beats was established on M.I.A.’s debut album, Arular, and he has since worked similar magic for major artists like Usher, Snoop Dogg, No Doubt and Shakira. But Free The Universe reeks of chasing the success of Baauer’s 'Harlem Shake' – which, incidentally, came out on Diplo’s Mad Decent label – like a rabid dog. As such, it’s just another notch on macho rave’s bedpost.