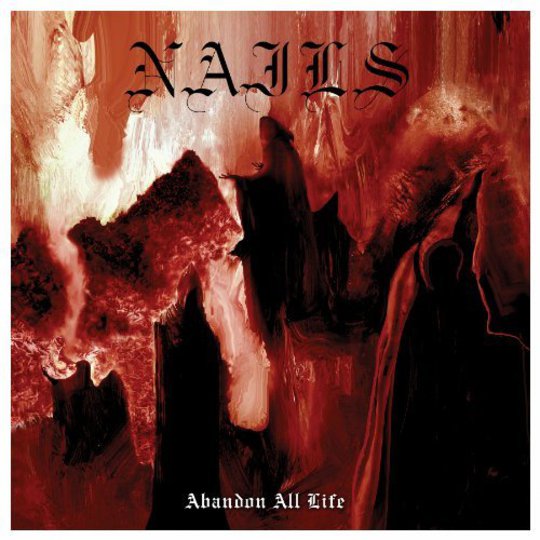 Just so that you know what kind of thing you’re dealing with here: if this review was to echo the record it’s reviewing then it would be a) one paragraph long, b) written in ALL CAPS and c) tell you to go fuck yourself at the end. Abandon All Life kicks off with zero foreplay: first track ‘In Exodus’ slams out of the speakers with a rattle of drums, grinding guitars and a screamed battle cry. And we’re off. Ten tracks, just under 18 minutes later, it’s over and you can pick yourself up off the floor.

Nails play a version of hardcore that is a long way removed from the technical, progressive, musically-tricksy variant that many bands have spawned recently. Abandon All Life is a primal form of hardcore that, for the most part, is based on playing old-school three-chord punk as fast and hard as the limits of human endurance allow. The production, by Converge’s Kurt Ballou, may be something that will attract a wider audience than such an uncompromising record would normally achieve. Some of the finest heavy records of recent years, such as Kvelertak’s self-titled debut, have been expertly produced by Ballou at his GodCity studio and his name can act as a seal of quality in the same way as perhaps Steve Albini’s endorsement can.

However, whereas Kvelertak and even Converge themselves have the mixture of aggression and melodic know-how to appeal to those outside the heavy music scene, Nails offer nothing at all by way of compromise. If you had the latest Pig Destroyer record high up on your ‘Best of 2012’ list, if you hold John Peel’s Napalm Death and Carcass sessions close to your heart then Abandon All Life will be a record for you to cherish. If not: move along, there’s nothing for you here.

The drumming on Abandon All Life is both a strength and a weakness of the record. Although there are a few interesting fills, most notably on ‘God’s Cold Hands’, the drumming is usually route one: pummelling the listener into submission by playing as hard and fast as possible. The same applies to the guitar work here: no solos, no fancy fret work, just chunky fierce chords played fast. What Abandon All Life lacks in subtlety and variation it gains in sheer single-minded brute force. The vocals match the intensity and aggression of the music perfectly: being of the throat-shredding screaming variety throughout. Lord alone knows what they are screaming about exactly but with track titles like ‘Pariah’ and ‘No Surrender’ - as well as the general tone of rage and desperation - it’s fairly easy to make a rough guess there are very few rays of sunshine to be found.

‘Suum Cuique’ (to each his own), the final track, takes up almost a third of the record’s running time, being a whopping five minutes long. It’s here that Nails finally slacken the pace and allow some sludgy and doom-inflected sounds to break up the headlong hardcore gallop of the rest of the LP. If you’ve made it this far through then you’ll either be totally won over, or you’ll have a migraine and a desire to never listen to Nails ever again.

With Nails there is no compromise if you don’t like it then you can go fuck yourself.