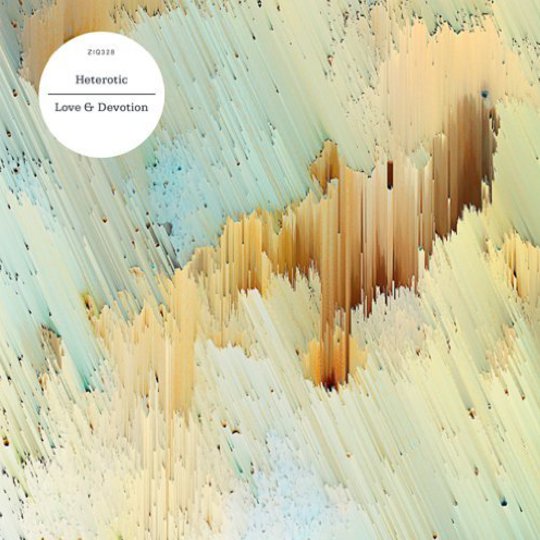 Remember Altar Eagle? The crunchy shoegaze duo who seemed out of place on Type Records with their fuzzy pop debut Mechanical Gardens. Formed by drone king Brad Rose (aka The North Sea) and his wife Eden Hemming, they wrote a completely disarming album, showing how an established artist can still surprise you just by collaborating with the person he shares his fridge with. Three years later and under eerily similar conditions comes a British counterpart: Heterotic, made from Planet Mu head honcho Mike Paradisnas and his wife Lara Rix-Martin. Like Altar Eagle, their focus is overcooked dream pop, so punchy but balletic it could bring John Hughes back from the dead.

Conceived in bed and written on Logic software, there’s a intimacy to Love & Devotion, which is more Radio 2 orientated than other Mu fare thanks to some cooing vocals from Warp’s Gravenhurst. His sighs over the scissoring keyboards of ‘Devotion’ have a floaty, abstract quality, the words sounding coming straight from Robert Wyatt’s bedside notebook (”May the circle be your problems”). The cold march of ‘Blue Lights’ finds the singer shrouded in synths and wigging out with paranoia (”Target the ones with the slow reactions/Blacked out windows, no distractions”), while ‘Knell’ takes ghostly grime sirens and weaves them around slow beats and gentle piano.

Heterotic’s passion for synthetic excess means echoing the fun side of the Eighties too, and parts of Love & Devotion are as upbeat as the title suggests. On ‘Wartime’, chilly keyboards come lit with a delicious squelching bass pad that sounds like someone swallowing frogs, Gravenhurst’s groans of ”The space between us grows” glazed in dramatic guitar chords. It’s as posturing and vivid as adult pop should be, building the mood set by opener ‘Bliss’ and its Enya synths/squeaky vocals. Paradinas and Rix-Martin have clearly raided their VHS collection to recreate the Reagan-era sound, and ‘Robo Corp’ is a particular highlight, marching like the score from the similarly-titled movie and featuring an anthemic brass synth borrowed from labelmate Kuedo. The murky children’s choir completes the decadent imagery - someone needs to go to Berlin and shoot the video now.

Even when downcast, Love & Devotion is a sensual, lively record and anyone mourning the death of Air France should find much to enjoy here. Just intriguing enough for the Eighties survivor crowd, Gravenhurst’s vague but descriptive lyrics recall Karl Hyde from Underworld, conjuring pictures of “Crane flies groping for the glow/Coin arcades and betting shops/Guilty sex and stale cigarettes”. As the cool slabs of ‘Slumber’ melt into snares on ‘Fanfare’ you’ll wish ideas here kept going, pushed deeper into retro-electronica’s weirder corners. Here’s hoping the sequel includes acid house.