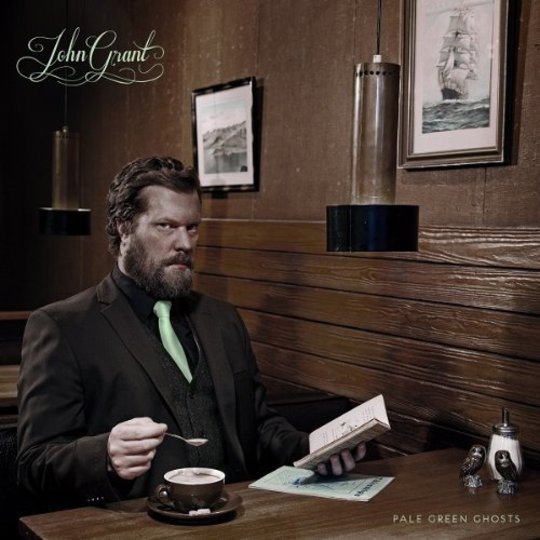 For those unfamiliar with John Grant's oft retold back story here's the short version. In 2004 his critically lauded but commercially pinched Denver-based rock band The Czars split, and he retreated further into an oblivion of drink, drugs and self-loathing. After half a decade lost in a bleak wilderness of cocaine, crack and self-destruction, Grant returned to New York and with former labelmates Midlake providing both encouragement and instrumentation, recorded and released the critically lauded Queen Of Denmark. An acclaimed album of bitter-sweet, sad love songs and hard-fought self acceptance, it stood as both a further testament to Grant's talent, and a triumphant vindication (if one was ever needed) of Midlake's faith in it.

Three years later he's returned with a new album and a new direction. The wistful, woodwind folk and gentle acoustic strumming of Midlake has been replaced by, or at least forced into cohabitation alongside, brooding darkwave and (almost) danceable beats. It's quite a departure for an artist whose previous career highlights include a gorgeously restrained, expansive (and quite possibly the definitive) cover of Tim Buckley's 'Song To The Siren' and 'TC And Honeybear', a heart-wrenching ballad for a former male lover that would bring a tear to even the staunchest homophobe's eye.

This time Grant's principle collaborator and co-producer is Birgir Þórarinsson of Iceland's tech house chameleons GusGus. Recorded entirely in his studio in Reykjavik, Þórarinsson serves as an interesting and largely effective foil and guide for Grant's excursions into electronica. The fullest explorations of his new sound are 'Black Belt' and 'Sensitive New Age Guy', but interestingly neither feels entirely convincing; the former is too sparse, the latter too busy, and Grant's delivery is clipped and lacks life in both. The best tracks are where he deploys his new arsenal of synths and beats in conjunction with his knack for gorgeous balladry.

'It Doesn't Matter To Him' begins as a lilting, longing mid-tempo ballad but around the four-minute mark an extended, free-flowing synth solo erupts from nowhere, 'Ernest Borgnine' is a moody, atmospheric number complete with a tasteful beat and plush sax and the title track mines the dark ambience of Trentemøller to great effect. Gurgling undercurrents of pulsing synths seethe beneath Grant's ominous vocals, whilst staccato stabs of brass and ominous strings help add further tension. Lyrically it deals with longing, escape and ambition – "warm late Spring wind whips through my hair/ I am right here but I wanna be there/ And no one in this world is gonna stop me."

'Why Don't You Love Me Anymore' is Pale Green Ghost's haunting highpoint. Atop a bed of stuttering beats, with Sinead O'Connor's haunting backing vocals echoing behind him, Grant rakes through the ashes of a failed relationship, plumbing the depths of despair and acerbic self-flagellation - "the knowledge that I can't be what you need is cutting off my air supply." It's the deepest Grant delves into his emotional trauma and one of the best tracks he's ever written.

There's the occasional dud, and occasional dull moment, but Pale Green Ghosts mostly succeeds in expanding Grant's musical palette, and his wry, knowing observations and lyricism remain as sharp as ever.