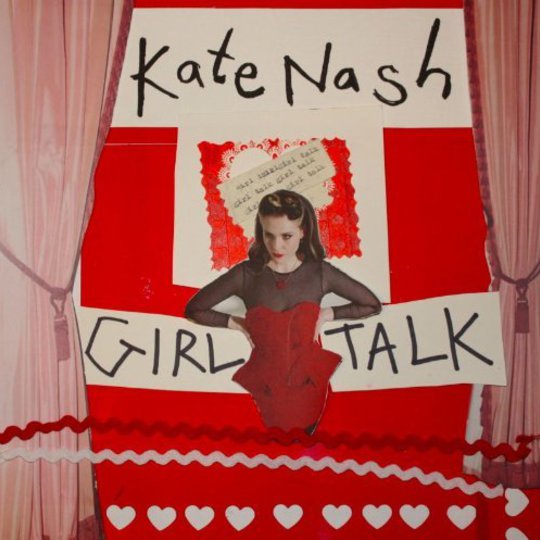 This isn’t quite the femmepunk Riot Grrrl reinvention you’ve heard about; the girl who wrote grown-up pop as perfectly observed as ‘Foundations’ and ‘Do-Wah-Doo’ hasn’t released a Bikini Kill record, nor is this a radically politicised feminist treatise, alas. It’s all a bit more soaked in than that.

Instead Nash has forged a concept album that embeds the modern girl's experience at its musical and lyrical heart, taking themes of friendship, boys, jealousy, sexism and insecurity and wrapping them in stripped-down punk rock and harmony powered proto-pop that owes as much to the Shangri-las as it does to Elastica and Babes In Toyland. It’s basically Caitlin Moran’s How To Be A Woman set to the Clueless soundtrack. And yes, you’re right: that does sound awesome.

And yes, that does occasionally mean an overt railing at sexism and the sheer bloody minded stubbornness of the patriarchal world, but that’s far from the the whole story. In all honesty it’s not even the best bits. From ‘Foundations’s acutely observed relationship-in-decay onwards Kate Nash has always had a knack for nailing universal experiences; it’s a testimony to that skill that her radicalisation hasn’t swamped her writing. Instead she’s allowed empowerment, anger and her bruised heart to seep a little into every song, powering, not overpowering the words. Musically, she leaves things deliberately underwritten, rooted in bass or scratchy guitar as opposed to the shiny-shiny production of her earlier work. It lets the songs speak for themselves, though it does occasionally expose their flaws as well.

Things come together best on ‘Sister’, the most overtly Riot Grrrl track here, a punk rock love letter to intense same-sex friendship, Nash howls and screams on a humdinger of a chorus that owes more than a little to Live Through This-era Hole. ”Another girl broke my heart” she sings, “being ripped away from you is like being ripped out of the womb”. It feels genuinely desperate and desperately sad at that, more so than when she sings about boys later on. It also includes the only reference to late Nineties Nickelodeon teen comedy Sister Sister you'll find on a feminist indie rock record this year.

The Hole-isms show up again on ‘All Talk’, a growling bass-driven punker that could easily have come out of Olympia in 1992, and one of the few times Nash’s anger is properly externalised, pointing a scattergun to the world and shouting “I’m a feminist, and if that offends you then fuck you”, in what is sure to be the album's most quoted lyric.

Elsewhere the anger is held in check, and this being Kate Nash is tempered with a good dollop of wit. ‘Death Proof’ takes its Tarantino referencing title to a natural surf-rock conclusion, ‘3AM’, ‘Conventional Girl’ and ‘Oh My God’ have the vintage girl-band feel of much of Nash’s My Best Friend Is You record and many of the musically lighter moments here deal with boys rather than girls. ‘Rap For Rejection’ attempts to turn the traditionally misogynist forms of hip-hop into a surprisingly cheery list of everyday sexism - a fun, almost throwaway moment on a record that occasionally threatens to take itself too seriously.

There are misfires here. The under-production and fractured feel lets down the sad and strange ‘Labyrinth’, which is as meandering and lost as its title suggests, and while that’s almost certainly the intention it just doesn’t quite work. At 15 tracks, Girl Talk is probably a quarter hour too long as well - it just doesn’t have the ideas to sustain itself. There’s a reason most of the bands Nash is referencing released records that were 30 minutes at most.

All is forgiven at the death though. Girl Talk ends in a hushed fashion, ‘You’re So Cool, I’m So Freaky’ treats insecurity in the same way Moldy Peaches’ Kimya Dawson does - by being a little bit sad and a little bit adorable while playing two chords on an acoustic guitar, it’s a lovely moment that lifts the last third of the record considerably. Things close out with ‘Lullaby For An Insomniac’, Nash’s vocal recorded naked and lonely before it’s joined by an entire orchestra, which surely must have cost half the budget of the record. It puts the album to bed with a sweeping overture, it’s grand and moving and completely, brilliantly in opposition to the preceding 51 minutes. An album that was all sharp angles, darkness, and clever nods ends like The Wizard of Oz. It’s as glorious as it is unexpected.