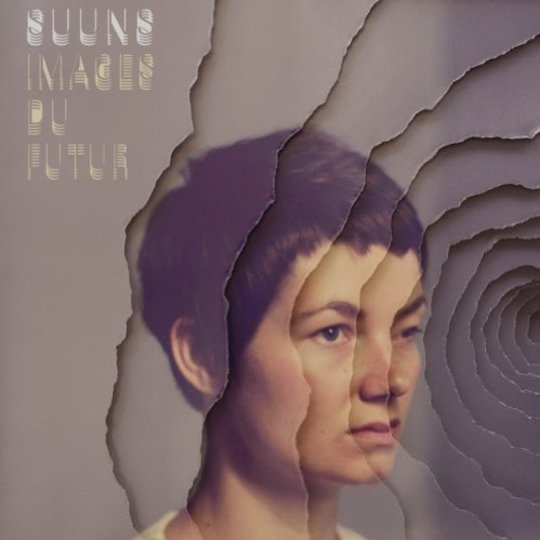 "The music won’t save you."

Music on its own can rescue you from certain types of despair and alleviate those doubtful times. It can influence mood and provide a temporary respite from downtrodden circumstances. But really, those are just fleeting feelings. Because through it all, real life awaits as the notes begin to fade.

As pervasive as it is, music will not save you.

At least that’s what Suuns want you to think. Their new album, Images Du Futur, is a petulant procession of sullen rock grit that writhes your senses before it soothes the agitation. From the onset, there’s a clear sense of crabbiness here, but that irritation — coupled with the band’s bottom-heavy compositions — works well toward the Montreal quartet’s dark ethos. From it, you get the sense that these dudes wanted to be punk rockers. Or maybe they’re garage rockers. There’s some funk in there, too. However, this is something much heavier and more electronic than before. It’s dance music with rugged edges: in an instant, you feel the need to start a fight; just as suddenly, there’s a desire to blast it out the window on some hip-hop shit.

Then again, it’s not like Suuns haven’t done this before. Their previous full-length album, 2010’s Zeroes QC, was just as restless as the new work, yet the sounds were much cleaner. ‘Marauder,’ for instance, was directly influenced by dancehall reggae, but its airy guitar chords and crashing drum cymbals gave it a garage rock punch. ‘Pie IX,’ with its distorted vocals and ominous synths, is perhaps the best indicator of the quartet’s current direction. It carries a methodical head knock, a wobbly funk groove that’s part-rock/part-intergalactic blues.

On Images, the aggression is increased to an almost dangerous degree. The controlled ire that characterized Zeroes gives way to dirtier rhythms and forceful vocal performances. Like on ‘Powers of Ten,’ the album’s volcanic opener: Atop a pervasive guitar loop and stuttering drums, vocalist Ben Shemie mutters angrily. There’s a heavy shoegazing vibe here, and it’s clear that the music is the main attraction. ‘2020’ would’ve been just as impactful without vocals: guitarist Joe Yarmush spins a buzzing guitar riff that plays well against drummer Liam O’Neill’s swaggering percussion. The two dance triumphantly within the beat, playing off one another with subtle force.

Yet as it plays, Images flirts with lighter rock fare and futuristic psychedelia. Like on ‘Edie’s Dream,’ which settles the album to an atmospheric pace with its offbeat bass line and hypnotic drum loop. It goes a long way to calm the record’s furor and feels natural amongst the more fidgety recordings. Then just as suddenly, ‘Sunspot’ appears in all its Radiohead glory: Shemie’s voice glides calmly within the jazzy-rock concoction, his words are mere instruments to accentuate the aesthetic. Images moves to avant-garde fare for its experimental title track; here, the band heaps layers of menacing synths for something that’s scientific and otherworldly, like the soundtrack to an Eighties sci-fi film.

I don’t know why Sunns grew so twitchy. It’s unclear why the band muddied its sound and opted for something a bit less accessible. With Images Du Futur, though, the band has stretched into unknown territory while remaining true to its own sound. Those who’ve followed Suuns will hear elements of its old ways; still, from its disjointed cover art to its woozy vibrations, it’s apparent that Suuns want to explore greater sonic space. As a result, Images Du Futur is a multifaceted excursion through post-punk and expansive pysch-rock. The music just might save you, whether or not the band agrees.