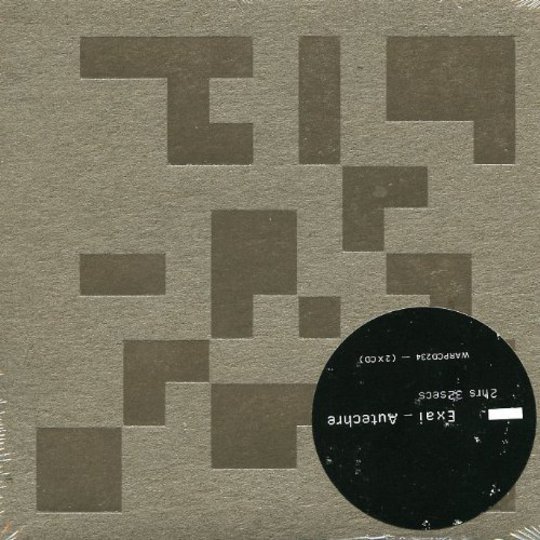 Cor blimey! Two hours and 32 seconds worth of music to get through. It's a wade through mystical amalgamations of electronic produce. It's a double helping. Double albums are always taxing to take in, for reviewer or the listener or fan - they take their toll on the ear 'ole. And the best way to treat them is like having got hold of two albums from the same artist and enjoy each one in its entirety. An audio siamese twin. And this one is no exception.

Even if it was only a single, it'd be tricky to grasp what is really going on on Exai. The aural assault of Autechre's sound is relentless. There are no obvious verses, choruses, hooks or charming lyrics to pull you in and connect into. But for perhaps the first time tracks like ‘runrepik’ that provide snatches of overprocessed vocals. There are also a barrage of unimaginable digital sounds, jacked up effect modules and unfathomable rhythms creating constantly evolving sonic architecture and landscapes hinted at through the titles of some of the track names from the album like ‘FLeure’, ‘bladelores’, ‘cloudline’ and ‘deco Loc’. Though that association might be applying too much order to such a creatively chaotic and experimental project. It's one of those hard to grasp music forms - listen to it on headphones and the acuity of it improves, listen to it on speakers and another side is revealed. This might be old news for proper Warp heads, but the Autechre sound was never as deconstructed and fragmented as now. Behold!

Manchester duo Rob Brown and Sean Booth, are one of Warp's chief ambassadors. They started out in 1987 and releasing on Warp in 1993 when their work was more influenced by the regulated beats of house, techno and hip hop. And sometimes a glimmer of the old times shimmers through like on ‘Tess xi’ when the beats almost become regular and the background emanates hypnotic harpsichordic sounds. But then the hi hat is completely irregular and unpredictable culminating in another supremely original track. If you were gonna be rude you might say some tracks like ‘vekoS’ sound like Space Invaders gone wrong or a pinball machine gone haywire like on ‘spl9’. But ultimately this latest version of Autechre’s vision offers a glistening set of intergalactic transmissions that are unreplicatable and evocative.