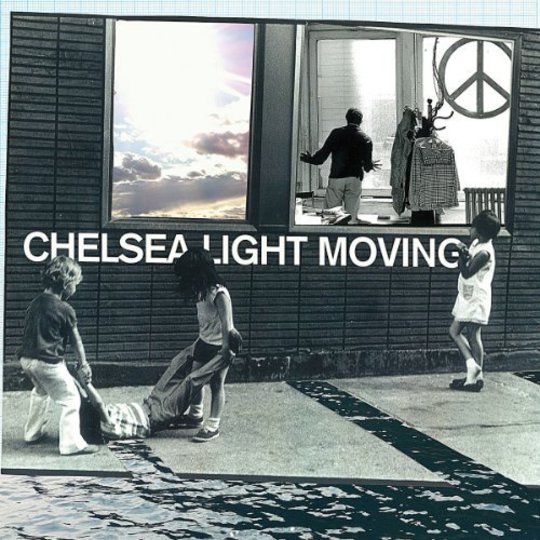 Thurston Moore, in case you didn’t know, is the Quentin Tarantino of alt-rock (stick with me on this...): An avid nerd who became a widely-worshipped quite-cool-yet-still-awkward genre god, prolific and pioneering, a connoisseur of both high art and low, enduringly successful, infiltrating the mainstream with an irreverent, subversive sensibility, proving both popular and cultish, challenging and commercial. If 2011’s Demolished Thoughts was Moore’s Jackie Brown (mature, melancholic, a bit slow) then Chelsea Light Moving is Kill Bill Volume 1: sharp and rejuvenated, bursting with colour, energy and violence, its creator jerking himself out of solipsistic middle-aging with a determination to resurrect and reinvigorate his residual youthful spirit.

If ‘Mohawk’ sentimentalises punk in the form of a poem, ‘Communist Eyes’ and the closing section of ‘Groovy and Linda’ do it musically by mimicking the sound of Eighties DC hardcore. ‘Lip’ does the same thing, only on an acoustic guitar and with a slowed-down groovy midsection.

Despite the odd mellower moment, such as the deceptively light opener ‘Heavenmetal’, Chelsea Light Moving glances down at the polite, folkish path Moore had ploughed with Trees Outside the Academy and Demolished Thoughts, stamps on it with Dr Marten boots, gobs on it, hurls a load of soil all over the place and then runs in the opposite direction back to 1995’s Psychic Hearts. At times CLM even eclipses Psychic Hearts’ brashness. The cathartically ragged ‘Alighted’ recalls In Utero’s primal nihilism, albeit with a dude-ish drawl rather than the Cobain shriiiiiiiek. Its heaviest passages touch on devil-horn-brandishing PROPER METAL.

Moore’s nods to rock ‘n’ roll history are never larcenous or derivative. His obsessions have all been absorbed, filtered and remoulded through his own unique personality and style. No other guitarist could generate/replicate the killer skonk soloing of the rowdily raucous ‘Burroughs’, and most of the tracks are embossed with the signature Moorean noise breakdown segment for the feedback-loving, tinnitus-awaiting purists.

CLM’s members previously toured Thurston’s solo material. The couple of shows I caught felt more pleasantly, shambolically care-free than especially vital or thrilling, so I anticipated this release nervously. Sure, unenlightening lines are repeated through an apathetic fringe (“too fucking bad / too fucking bad...”) and some riffs have been constructed with a “yeah, whatever, that’ll do” philosophy. Nothing wrong with that of course, this review was conceived along similar lines: “Tarantino?!” I asked myself, “Yeah, whatever, that’ll do.” The odd disposable lyric and idle Jazzmaster lick add to the record’s spontaneous and instinctive spirit. The band are tight when needs be and untamed where it works. The songs are punchy and direct. They jump out of the speakers, slap you around the head, splash water over your face, slap you again and then they’re gone. They may not live on as eternal alternative classics, but they feel emphatically, explosively alive. While preserving his natural nonchalant charm, Thurston sounds more vigorous, bellicose, twitchy and forceful than he has in years.