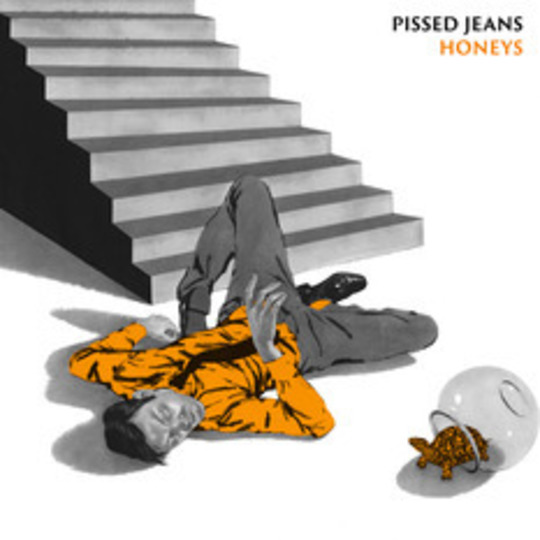 "I'm feeling like Jesus Christ our saviour" declares Matt Korvette at the conclusion of 'Cafeteria Food'. While not quite reenacting the epiphany, the song's three-and-a-half minutes of guttural subterfuge and venomous insults highlights Pissed Jeans at their finest. With the business as usual signage already lit up by the halfway mark, Honeys' existence is fully justified even with six more equally vindictive slices of visceral, filth-ridden punk rock to go. But then did anyone honestly expect anything less?

Having spent five years enthralling yet scaring the living daylights out of audiences in equal measures - culminating in legendary Seattle imprint Sub Pop adding them to their roster - it was 2009's third album King Of Jeans that really established the band as a force to be reckoned with. The likes of 'False Jesii Part 2' and 'Human Upskirt' stand proud as two of the finest compositions to have emerged from punk's murky underground this side of the millennium... not that King Of Jeans actually contains any weak moments among its riotous twelve pieces.

Bearing all of the above in mind, it's perhaps little wonder that the follow-up has taken so long to come to fruition. Recorded with the highly acclaimed Alex Newport, mostly recently associated with Bloc Party's Four, anyone expecting a more polished, cleaner sound may be disappointed. Or maybe not? After all, its the harshness of Pissed Jeans' recordings that make them such a brutal force. Indeed if anything, what Newport has managed to retain is the frenzied assault of their live show coupled with a density that flows through the core of Honeys from start to finish. Although not a concept record as such, there's little here to suggest the recent fatherhood undertaken by all four band members has channeled their aggression into meek and mild mannerisms.

Instead, the brooding scrawl of 'Chain Worker' and 'Health Plan's incendiary thrash suggest they've become an even angrier proposition than before. The same reference points rise to the fore as on their previous releases; Korvette's impoverished yelps flitting somewhere between The Jesus Lizard's David Yow and Nick Cave during The Birthday Party's Junkyard period. Musically taking it inspiration from the aforementioned plus any number of DC hardcore bands you'd care to mention with a dash of Mudhoney thrown in, Honeys is a savvy, all-inclusive slab of disenchanted rage that doesn't hold back at any juncture.

"Take all my faults and twist them in your head" roars Korvette at the object of his desires. Elsewhere he's seeking your trust; twice in fact on opener and lead single 'Bathroom Laughter' before asking wryly once more on the aggression-fuelled 'Vain In Costume'. Split in two halves by an 80-second interlude of instrumental noise entitled 'Something About Mrs Johnson' that actually dates back to the band's teenage years, Honeys isn't so much a continuation of the themes already documented so forcefully amongst its three predecessors, but more a glowing endorsement for midlife paternal angst instead.

"No reason to ever grow up" insists Korvette on closing monolith 'Teenage Adult' and you know what, he may just have a point. Maturity and Pissed Jeans; never the twain shall meet. One can only hope...