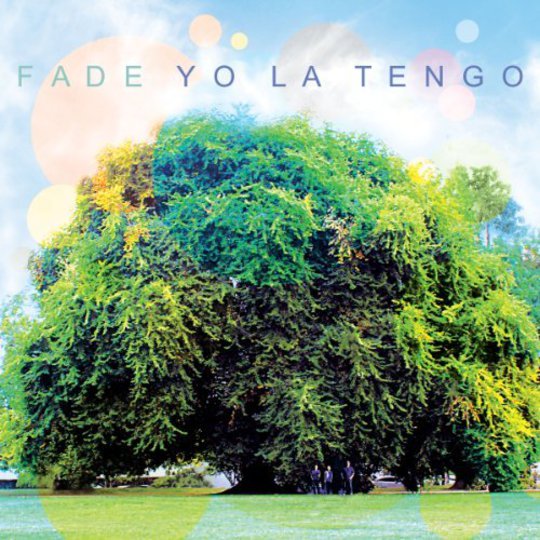 In a couple of months no-one is going to remember that the new Yo La Tengo album came out just after Christmas, but right now it feels pertinent. What better antidote to the bloatings of the festive season with its sentimental and sensual overload? After weeks soundtracked by sleigh bells, the beefy forced laughter of panel show contestants and the nattering of relations you don’t really like going on about things you don’t care about, so many bright lights, so much gaudiness, so much stuff you're left feeling a bit sick and a bit dazed. And then you press play on the the new Yo La Tengo record, this lovely, unfussy, uncluttered and warm 45 minutes of clarity and light and it makes everything better. It’s cool air on a hungover head, a hot bath after a long day. It’s 2013, there’s a new Yo La Tengo album, and everything’s going to be okay.

And like Christmas it feels like Yo La Tengo have always and will always be here for us. This is their thirteenth album, they’ve had a solid line up for the last 21 years of their 29-year career, they’re the REM that never became massive and carried on being brilliant instead. They’re what Belle and Sebastian, if they’re lucky, could be in another decades time. They’re a treasure. The definitive indie nerd’s band. Fade isn’t their best ever work - that’s still 1997’s I Can Hear The Heart Beating As One, it’s not quite their best this century, just pipped by 2000’s ...and Then Nothing Turned Itself Inside Out but it’s certainly the best thing they’ve done since then and shares a certain atmosphere and charm with that record.

The trio have always been magpies, always picking the right sound and the right feel for the right song, and it’s something Fade does exceptionally well. Everything is so perfectly placed - sometimes very layered and intricate but never overdone. Psychedelic opener ‘Ohm’ builds over six minutes of loping percussion and jangly guitars, adding widening keys and distortion as the sound builds and fills out. In other hands it could easily disappear into its own derriere, but YLT instinctively know not to over-egg the pudding and the result is never less than satisfying. It’s a trick Fade pulls a few times, especially on Georgia Hubley’s ‘Cornelia and Jane’, which uses a single strummed chord in place of percussion, layering on warm brass as Hubley asks “how will we hold back the tears?”.

Elsewhere Ira Kaplan’s melodic instincts are still very much intact- ‘Is That Enough’ is Burt Bacharach via Magnetic Fields and the Pixies, ‘Paddle Forward’ is sweet fuzzpop that out-Pavements Pavement and ‘Well You Better’ has a jaunty Sixties sheen beneath a snaking bassline and jazzy keys. Miles ahead though, and this record's clearest entry to the ‘Great Yo La Tengo Songs’ catalogue is ‘Stupid Things’, a skeletal, yearning, slightly scuzzy pop song with an insistent beat and ebow that gradually gives way to glorious strings like the clouds parting for the rising sun. It’s gorgeous.

This isn’t one of those records that’s going to sweep the board at the Brits or Grammys, yoof TV presenters won’t be name dropping it for street cred, it’s not going to be used to soundtrack sporting highlights or emotional bits in hospital dramas. Leona Lewis won’t be covering it. Fade isn’t that kind of album, that’s not what Yo La Tengo do. There’s nothing showy here, nothing flashy, just an understated, immaculately put together collection of happy and sad, yearning and sweet songs. Maybe the January blues means we latch on to the light where we find it, but less than a fortnight into 2013 we already have one of the records of the year.