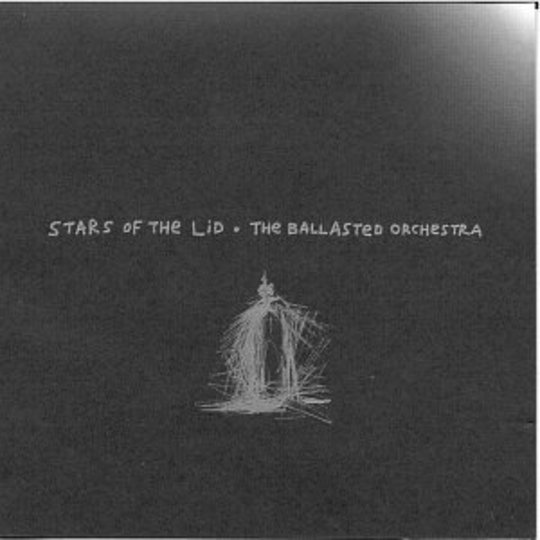 It’s disarming to learn that The Ballasted Orchestra, Stars of the Lid’s 1997 Kranky debut, was recorded entirely to 4-track cassette. The Texas-born duo of Adam Wiltzie and Brian McBride is not one that’s often associated with the humble and unsophisticated; rather their music is often accorded fawning adjectives along the lines of ‘grandiose’ and ‘transcendental.’ The fact is, though, that you’d never know their third record was recorded by such primitive means — the album’s eight tracks are comprised of dense and complexly textural ambient pieces, haunting sonic mobiles slowly rotating in front of the listener.

Don’t expect the otherworldliness of And Their Refinement of the Decline here, though — these are bare, protracted, earthbound drones. The Ballasted Orchestra represents the germ of an idea, the scaffolding upon which Stars of the Lid as we now know it would come to be built. It finds precedent in the raw minimalism of La Monte Young, or the earthier, more harrowing drones of Brian Eno, and has little of the velvety, gravity-defying serenity of their later output.

‘Fucked Up (3:57 AM),’ for example, is a slow, lugubrious dissolve to silence, shards of processed guitar seeping through the texture like wax dripping down the side of a candle. Meanwhile, ‘Music for Twin Peaks Episode #30, Part 1’ represents something more bullish, the track’s meandering impetus constantly searching for contentedness in its economical, two-chord construction. Its sibling, ‘Part 2,’ coaxes the drone towards noise, losing nearly all sense of harmony in favour of a blurry, forbidding heat haze. In fact, only the blanket cloud cover of 18-minute coda ‘The Artificial Pine Arch Song’ is indicative of Wiltzie and McBride’s future recordings. Its softer tones and elegant fluidity seep through the subconscious, and the dreamlike escapism of it all is what has since come to define the duo’s output.

While The Ballasted Orchestra perhaps isn’t the jewel in the crown of Stars of the Lid’s catalogue, it remains a solid and worthy entry. Those industrial touchstones, characteristic of the earlier records, are still present, and the band who delivered 2001’s The Tired Sounds of Stars of the Lid and 2007’s And Their Refinement of the Decline is still in its nascent state, a proto-realisation of that which they would become a decade later. They’ve since become champions of the ambient domain, both artists developing and sidestepping into separate projects of their own, but their music as Stars of the Lid endures; a duo whose output has certainly softened round the edges with age, but whose seventeen year, seven-album career speaks for itself.