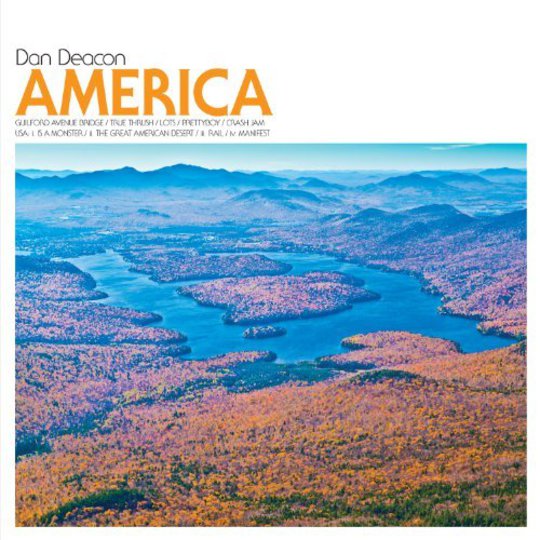 Dan Deacon is a man who takes fun seriously - or at least he does fun with a whole lot of conviction. I mean, if you call your debut album Spiderman of the Rings you have to, don’t you? On second set Bromst he let everyone know that he was classically trained, but there was still a song based around looping a dog’s bark. Now, having taken part in Occupy Wall Street and releasing a concept album boldly entitled America, is Dan Deacon about to 'get serious'?

Well if you clicked that link above you’ll know the answer is both yes and no. The music on America has weight to it for sure. However it’s anything but po-faced and rather than go down the route of explicit investment bank and Republican-bashing rhetoric that cynics might expect, America is a personal exploration of what America means as a state, as a people and as a land to Deacon himself. Taking a Hounds of Love-style approach to the concept album, side A is filled with individuals songs and side B is a four-song-suite under the titles ‘USA’ I-IV. A feels like a joyous rallying cry, Deacon for the most part providing the sort of maximalist adrenalin-rush skew-pop that he excels at, whereas as B is both more expansive and contemplative in construction and mood than anything he’s done to date. Another distinction is how the songs on the record’s first half seem to have their own lyrical agenda, whereas ‘USA I-IV' focuses on evocation of movement and landscape in what seems intentionally apolitical stance.

Of course, while on paper this all looks rather commendable, without the songs to back it up America would merely be an admirable record. It isn’t; it’s a great record. Since Bromst, Deacon has further dabbled in classical music with collaborators including SO Percussion and a 50 piece Canadian orchestra. On America he brings it all to the table, but the complexity of the music’s origins and construction never obfuscates its overall impact. That said sometimes you can’t help but marvel at the intricacies and rhythmic minutiae. Opening track ‘Guilford Avenue Bridge’ mutates between warped electro-noise, a percussive barrage and manic super-speed afro-pop. The two tracks that follow, singles ‘True Thrush’ and ‘Lots’, are confections of great hyperactive pop music with so many electronic and organic timbres inextricable threads in a richly woven tapestry, with odd recognisable sounds sweeping out, like the swirling Caribou-esque woodwinds on the former track.

Quite apart from collaborating with other musicians in the studio for the first time, the ‘USA’ song suite involves a 22-person orchestra who open ‘USA I: Is a Monster’ with a stirring and scale-ascending symphonic swell, which fades giving way to typical Deacon electro noise, insistent pounding toms and a rising clamour of layered vocal incantations, when out of it all re-emerges the symphonic swell once again, rousing and triumphant. The bleeping digital fallout of that persists throughout much of ‘USA II: The Great American Desert’, driven by a motorik beat into the incredible rhythmic interplay of numerous mallet percussion instruments which in turn hit upon a steady pulse that runs through ‘USA III: Rail’, whilst little light parps of trumpet, whorls of woodwind and airy strings create a clean spacious sense of wonder contrasting starkly with the mechanical feel you would come to expect from music evoking rail travel. From here it’s one final reprise of ‘USA I’s symphonic swell as a rousing finale on ‘USA IV: Manifest’.

If there’s one criticism it’s that the lyrics are often hard to discern. It takes many listens for the key lines on both parts I and IV of ‘USA’, “ Nothing lives long, only the earth and the mountains”, to start catching your ear, although the songs still evoke an atmosphere of triumphant realisation in line with those sentiments. However, in ‘Crash Jam’ the words coming come tumbling from Deacon’s chops a mile a minute, cloaked in light distortion and buried low in the mix of shuddering beats and all manner of synth sounds. “Dark Desert Sky/One Million Years Old/The Moon Appears/No One Can Ignore” Deacon sings - it’s the dark core occasionally buried a little too deep America’s busy sound.

But this one weakness sort of sits well with the dichotomous concept at America’s (and indeed America’s) heart - America the “evil earth-destroying monster of war, corporate greed and bigotry” and America the land of “beauty in all its vast and varied glory”. No one concept album, even one with the complexity of America, could ever hope to fully address the manifold problems of the USA, but in searching for his own answers Dan Deacon has crafted an unique testament to this fact and to his own inimitable, and ever increasing, talents.