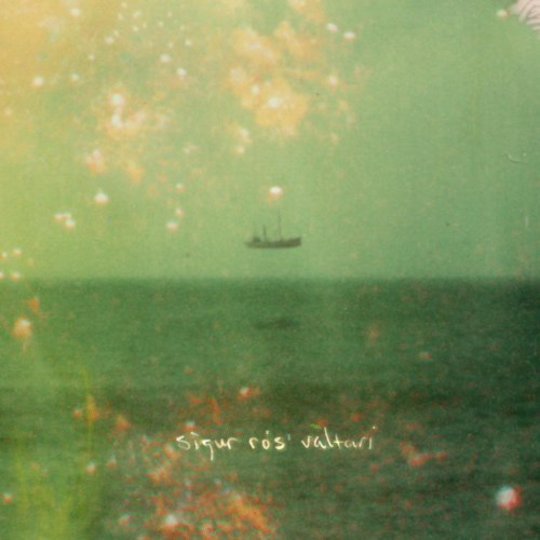 It’s 23 degrees but feels four times that, this train a kiln of barely-held tempers and liquid skin, mewling infants and stillborn productivity. Businessmen dab their foreheads and click shut their laptops, defeated and slightly panting. This is not a time for thinking. It’s much less a time for writing, the words melting before they even form into a treacle of babbled syllables and stuttered pause.

Partly that’s the heat. But mostly that’s just the effect that Sigur Rós albums tend to have, time warping and slowing and seeming to take the world around with it. Outside the carriage window a lone bird circles above long grass, its measured arc entirely aligned with the sustained strings and rising tension of 'Dauðalogn'. Two rows down a can falls to the ground, liquid pooling in synchronicity with 'Ég anda's opening vocals before it seeps into someone’s bag. The gaping, decayed maw of the woman opposite, who genuinely hasn’t paused for breath in three hours, opens and falls at the pace of 'Varúð’s climactic drums, spittle and bits of food spraying cinematically. Somehow, Sigur Rós’ music make the mundane, the awful, seem beautiful, even meaningful.

Nonetheless, the band’s sixth album proper is likely to be divisive. The early response to Valtari’s preview streams tended, with very few exceptions, to fall into just two categories: abject fawning and rank dismissal. “Absolutely beautiful” chorused many. “I wouldn’t bother” said others, echoing a counterview lurking at the fringes, sharp-clawed and snarling.

But then Sigur Rós themselves have long been a band of diverged personalities, of varied sounds and split characteristics. At times they’ve seemed like two groups, with the gothic dirge of Von and the fractured minimalism of Ba Ba Ti Ki Di Do on one side and the unfettered - almost saccharine - carnival of 'Gobbledigook' and 'Hoppipolla' on the other. Many, perhaps, were expecting more of the latter: certainly the band’s last studio release, 2008’s Með Suð í Eyrum Við Spilum Endalaust, seemed to signpost a ‘poppier’, more radio-friendly direction for their music, replete with choruses and three-minute track lengths and - splutter - lyrics in English, an impression that frontman Jónsi Birgisson’s solo excursions have done little to dispel.

With Valtari, though, the band have opted for another route, a return to the sparsely-populated expanses that characterised Ágætis Byrjun and ( ). Heck, it goes further: with its pared-down minimalism and heavily instrumental approach it recalls Jónsi's Riceboy Sleeps collaboration with his partner Alex, unsurprising given the latter’s involvement in producing the album. And this is absolutely no bad thing: sure, there was fun to be had amongst the marching bands and confetti cannons of recent tours, band members daubed in facepaint and theatrically-clothed, but they’ve always been better suited to the shadows, to the flickering grain of aged footage and the ghostly dance of silhouettes.

This is not an album of easy melodies, of playful riffs and crowd-pleasing moments. Indeed, it seems not for the crowd at all: as background music this fades away, shrinking into a still corner away from the noise. Valtari’s eight tracks need space and time, perhaps far more so than earlier releases: this is scarcely a collection of songs so much as an ebb and flow of mood, shy and intimate and understated to the point of whisper.

It begins with that whisper, actually, with soft breathing slow and measured as though a metronome that we need to adjust to, opener 'Ég anda' balancing between silence and crescendo as it flows and builds and ultimately falls away in a template that recurs across the album. Lead track - if only because it was released first - 'Ekki Múkk' showcases it most effectively, an unhurried assembly of vinyl crackle and fragile guitar swell and Jónsi's lullaby falsetto that never really strives to get anywhere but just exists, dancing solipsistically in the margins. Variations on the theme are small but striking: the music box chimes of the title track itself recall the night terrors of the band's earliest material, the sound tense and washed through with mourning, whilst 'Varðeldur’s piano echoes and fades, the pace draining inexorably to a close.

Arguably Valtari’s peak comes early, third track 'Varúð' rising orchestrally to an unexpected cataclysm of drums and noise and peals of feedback that casts a shadow far across the album’s remaining minutes. But this is not, really, about the highpoints. In an era of cherry-picked downloads and songs produced to ruthless formula Valtari seems rather brave: across a runtime of nearly an hour there’s little effort to hold our attention, to vary the tone or venture anywhere, anywhere near mainstream appeal. And sure, huge swathes of this may run the risk of passing by unnoticed, of blurring into a single reverbed note, but that’s our responsibility, and quite frankly our loss. Valtari might not be a huge digression for the band but that doesn’t matter: this is quietly, entrancingly and thoroughly sublime.