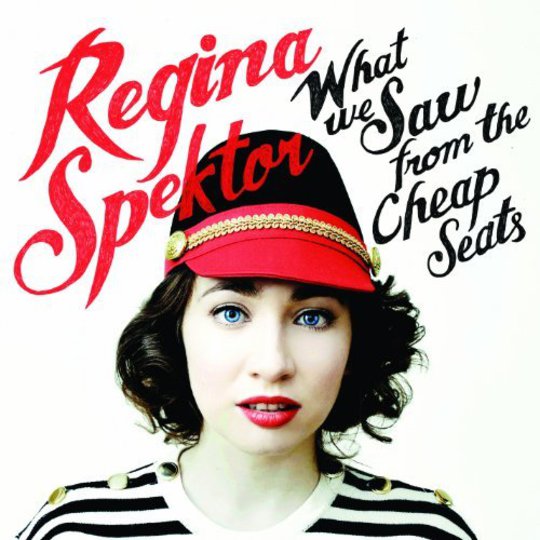 Indie boys and girls of the world beware; Regina Spektor has a new record out which takes a familiar aim straight for your heart. With her sweetly charming persona and darkly poignant take on piano pop, Spektor is very easy to fall in love with. For the more cynical, she’s perhaps equally easy to dislike, but in her own isolated world where love is everlasting and businessmen strip off their suits to lick rocks, the voices of bitter naysayers can hardly be heard.

While my teenage self was completely besotted with Spektor’s Peter Pan perspective, somewhere along the line she has become more difficult to relate to. Perhaps it was the glossy production values introduced on 2006’s Begin to Hope, which whiffed of a top-down pressure and ‘marketability’ never detected on the likes of Songs, or even the major label powered Soviet Kitsch. Although Regina’s best material still has a knack for getting to the very roots of our own human nature, that emotional weight can be undermined in the wrong context or by one childlike affectation too many. In the case of ‘Laughing With’ for example, a single from 2009’s Far, there’s a jarring misreading of atheism ("No one laughs at god in a hospital, no one laughs at god in a war" etc.) that is difficult to overcome despite the song’s good intentions.

Spektor’s latest effort finds the Russia-born New Yorker, now 32, reflecting on age and the passing of time. At its most affecting What We Saw from the Cheap Seats is a sad and touching record, filled with love and the memory of. Standout song ‘Firewood’, for example, finds Regina in full ballad mode, using the dismantling of a piano for firewood as a metaphor for the death of a loved one. Despite initially rallying against the idea, Spektor concedes that age will inevitably catch up with us all, singing, “You'll want to go back, you'll wish you were small / nothing can slow the crying / you'll take the clock off of your wall and you'll wish it was lying.” It’s by no means the first time Regina has written about death and its effects, but it’s been a while (‘Chemo Limo’ springs to mind) that she’s done so this effectively.

Other songs aren’t quite so successful, and parts of ...Cheap Seats feel either disposable or a revisiting of old ground. ‘How’, for example, should be a moving effort about clinging on to happy memories (“Time can come and take away the pain / but I just want my memories to remain”), but lacks the eccentric spark of the similarly themed ‘Flowers’ from Soviet Kitsch. Likewise, ‘Ballad of a Politician’ revisits the same territory as ‘Ghost of Corporate Future’, but its attempts at juxtaposing basic human life and corporate nonsense don’t quite measure up to the latter. There’s also a rehashing of ‘Don’t Leave Me (Ne Me Quitte Pas)’ from 2002’s Songs, but the additions of some upbeat brass and a new coat of paint don’t add a great deal to its original recording. None of these are bad songs, of course, but only a couple from the record would even be in contention for a Regina Spektor ‘best of’ playlist.

Although What We Saw from the Cheap Seats doesn’t quite have me weak at the knees, I can’t help feel a fondness for Spektor, who continues to bring warmth to should-be depressing subjects. Lead single ‘All the Rowboats’ is one of the album’s more interesting moments, mourning the life of great art stuck behind museum glass. “Masterpieces serving life sentences, it’s their own fault for being timeless,” she sings over a frantic piano melody, as thudding drums crash around her. Whether or not Regina Spektor has her own masterpiece left in her I’m not so sure, but it’s good to have her around, tugging on those heart strings and shedding some light on the darker corners of life.