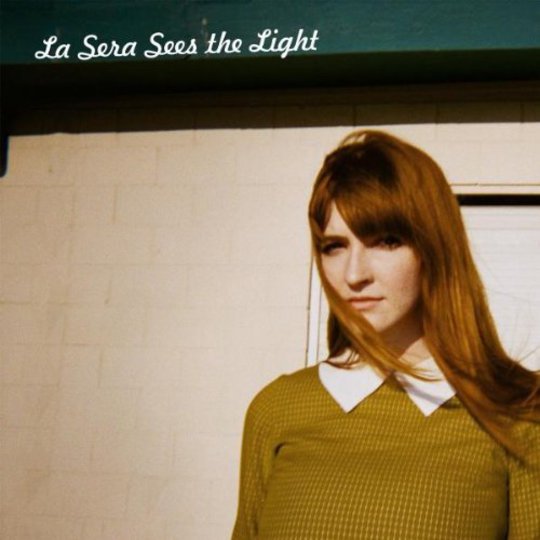 It’s hard to tell if the homophone in the title Sees the Light is intentional or not, but ‘Seize The Light’ certainly makes for a fitting alternate title to the second solo LP from Vivian Girls’ bassist Katy Goodman, comprised of ten tightly focused slices of bedroom pop delivered in a swift half hour blast. By the term ‘bedroom pop’, I don’t mean lo-fi recordings where rugged charm is designed to mask ineptitude and half-sketched ideas. (In actual fact, these songs are crisp and clear all the way through the mix, much more so than Goodman’s work with the Vivian Girls). I call it bedroom pop in the sense that it’s almost impossible not to picture Goodman writing these songs alone in her bedroom with a two thirds empty bottle of wine; picking a few chords (sometimes as few as two, never more than four) and delivering uplifting defiance in the face of relationship breakdown. Two minute power anthems from someone too cool to write this shit in a diary.

Just look at the song titles: ‘Break My Heart’, ‘Don’t Stay’, ‘I’m Alone’ - it’s definitely an album about summertime love and loss, but it’s always halfway happy about it, taking an ah-well, plenty more fish in the sea, I’m going to get drunk with my flatmate tonight type of attitude about things. The first half of the album plays to this mood straightforwardly - the rapid tempo and giddy fuzz of early triple punch ‘Please Be My Third Eye’, ‘I Can’t Keep You In My Mind’ and ‘Break My Heart’ get extra juice not from complicated textural nuance, but from just chucking another guitar in the mix - more sound, more feeling. With Goodman’s voice presented loudly and clearly above the instrumentation - an uncharacteristically direct vocal performance by her own standards, neither drowned out by distortion nor soaked in reverb - these are pop songs which, in their simplicity and melodic peppiness, are welcomed under your skin instantly.

The slower jam of ‘It’s Over’ marks a shift in momentum for Sees the Light, heralding a slightly more varied back half than its single minded opening run. We’ve got a calypso flavoured lilt to ‘Real Boy’, and a mid-tempo grunge homage in ‘Look How Far We’ve Come Now’ for example - songs which, while shifting the instrumental focus, still retain the instant gratification of Goodman’s vocal work; dreamy lyrics and melodies you can join in with on first listen. Whilst, on that basis, these songs still work as effectively as the early cuts, it’s true to say that Sees the Light's best songs draw just as much strength from their simplicity as they do from their addictive refrains. The downbeat, fingerpicked ‘I’m Alone’ for example, sporting the album’s most intricately constructed bed of instrumentation, is a low point - a thankless overstretch of ambition on a record which is at its strongest when it just makes you want to turn it up and share in Goodman’s girlish optimism. But by spending most of its brief running time in an uptempo, breezy mode, Sees the Light more than compensates for its relatively modest arsenal of hooks and similar sounding choruses. If nothing else, Katy Goodman sounds genuinely carefree and happy on this record, and does a pretty good job of making her listener feel the same way.