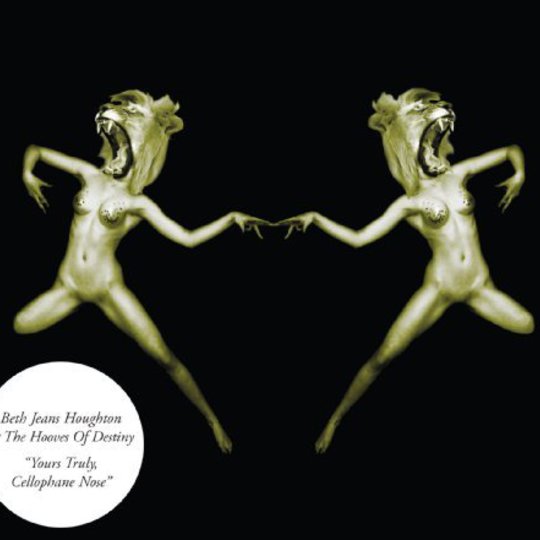 A lot of artists tipped as ‘ones to watch’ spit their albums out at the start of the year, aiming to capitalise on all the attention they’re getting, and Beth Jeans Houghton is no exception. The thing is, she’s been ‘one to watch’ since 2009, when her Hot Toast Volume One EP delighted fans of all things frenetic, female and folky. Since then though, there’s been no other releases from Houghton, who’s chosen to take her time with her debut album, working with producer Ben Hillier on this collection of songs for over two years until she was happy with the results.

It’s that sense of purpose and singularity that marks BJH out amongst the raft of other spangly female singer songwriters. Anyone who’s seen one of her live outings with The Hooves Of Destiny will know that this isn’t folk in the serious sense of the word – you’re as likely to see child tap dancing or a burping contest on stage as you are to hear a plaintive acoustic lament. If you haven’t seen her live, then that album title alone should also give you a sign that Houghton isn’t too caught up in being the next Florence.

If you were going to do a very, very rough comparison for someone who’s never heard Beth Jeans Houghton, you might briefly mention Florence Welch, if only for a certain flightly, theatrical nature that the two share, but you’d also have to add the likes of Devendra Banhart, Bill Callaghan or even Neutral Milk Hotel to the mix to give her songs the justice it deserves.

Overall, she’s incredibly difficult to pin down. ‘Atlas’ is a pretty straightforward track in BJH’s world, but it still manages to rollick down three different avenues before careering into a spoken word section and building to a crashing crescendo. It’s followed by ‘Night Swimmer’, which would be an aching ballad in other hands, but here starts as a terrifying lullaby before falling into something resembling a sea-shanty. There’s a spoken word bit in that one as well, which perhaps means you can also shoehorn Boys II Men in as an unlikely influence.

On initial listens, the only slight disappointment with Yours Truly, Cellophane Nose is that the tracks that stand out are the ones you might already be familiar with – singles ‘Dodecahedron’ and ‘Lilliputt’. They both still sound fantastic, building from gentle, acoustic beginnings to stomping pop heights, all swooping strings and hollered vocals. However, a few listens reveals the strength of the other tracks hidden underneath all the piles of musical dressing. ‘Veins’ is perhaps the best example, revealing a soulful, serious side to BJH that hasn’t been seen too often before. That it then veers down that same rollicking corridor that all her other best tracks follow can be forgiven, because in the world of Beth Jeans Houghton, it seems the most natural thing to do.

All the changes in directions, the bells and whistles are held together by Houghton’s most impressive weapon, her voice. It’s not a voice with what idiots might call ‘the wow factor’, with no Adele-isms or Beyonce mimicry. Instead it sits in a curious place between ethereal and earthy, one moment gently lapping against the backing track, the next swooping into richer, lusty territory. It helps that Houghton knows how to play with what she’s got, adding extra layers of harmony and counter vocals to take the tracks in all sorts of unexpected directions.

Yours Truly, Cellophane Nose is a success, in that it captures what Beth Jeans Houghton has been doing in her live shows for the past couple of years, without diluting or rushing it for the sake of a time-specific tag. At just 33 minutes long, it’s chaotic, cluttered and certainly not straightforward enough to cast her as the ‘next Laura Marling’. All I can say is, thank goodness for that.