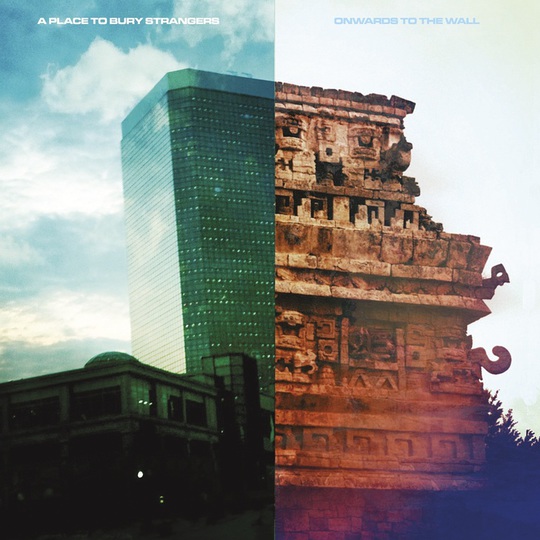 What we all love about A Place To Bury Strangers is the way no other band sounds quite like them. Sure, there are some that might be regarded as musical cousins - Screen Vinyl Image perhaps comes the closest - but the only blood relatives are their parents, Skywave, and their siblings, Ceremony.

What I love about A Place to Bury Strangers, apart from their persistent novelty, is how their music looks like water:

That up there is the sound graph for EP Opener 'I Lost You'. The intention behind the first two tracks appears to be to test the extent to which Exploding Head can be compressed into six minutes. The first starts with the mad guitars and bass off ‘It Is Nothing’, and spikes them with the madly metallic percussion that launches ‘In Your Heart’. Then it takes a breather (which you can see where the graph 'breaks' right at the beginning) before Oliver Ackerman's voice shows up. The rest of the song is a tussle between ‘Ego Death’ and ‘Lost Feeling’, with ‘Ego Death’ managing to dominate its opponent through most of the track, despite the latter appearing more powerful in its original form.

The ripples you see at the end are the only new noises I heard on this track - a series of cavernous explosions to close the song and lead us on to 'So Far Away'. Not quite as outspoken as its predecessor, the second track leaves you with the taste of 'Keep Slipping Away' at the back of your throat. The structures of the songs are almost exactly the same, complete with a delicious drop in tempo towards the end of the newer track, where the vocals turn pensively metallic before resuming their standard course, supplemented throughout by a bassline that echoes the guitar parts in 'Keep Slipping Away'.

It's the third and title track that's unprecedented. Here, you'll meet Alanna Nuala - the second voice on the song and the first time I've heard a female vocalist on a APTBS track. Thanks to some serious sleuthing (actually just a quick and curious email) I found out that Alanna and Oliver are roomies over at Death by Audio and she sings in a band called Moon. I would have thought a delicate voice on songs as dense and heavy as APTBS's would be a risk, but REJOICE - I was wrong! Her voice complements Ollie's and supports the music perfectly; not so light as to wind up lost in the noise, yet not so bold as to scratch its way through it. In defence of the musical composition itself, 'Onwards to the Wall' is beautifully bass heavy and cut only by intermittent, diagonal guitar lines to ensure the music and voices shadow each other just so without either appearing too blatant.

We make another new friend in the last track. Ollie goes quiet and leaves us and Dion Lunadon to get better acquainted. Their new bassist had been helping with backing vox this entire time but 'Drill It Up' is Dion striking up an unaided conversation with a new group of friends. Unsurprisingly, Dion's voice is not as weighty as Ollie's, but against a similar backdrop gives the music a tinge of late Nineties psychedelia that I've never experienced from any APTBS tracks before.

In the absence of there being anyone effectively gleaning APTBS's sound, APTBS have to resort to doing it themselves. The results, despite any implications of derivativeness, are really quite refreshing. 'I Lost You' sounds like a band well aware of how it is the sole purveyor of a certain style of shoegaze to an audience starving for the stuff. Onwards To The Wall is clever this way - it satisfies our most immediate thirst straight off the bat before venturing into relatively untraversed territory. It does appear to lack the grime of Exploding Head, and the throat-constricting throb of their self-titled first album, but this may simply be the result of Not Enough Tracks. Nonetheless, it is unmistakeably A Place To Bury Strangers and they're giving us what we want. The only additional complaint is that there’s not enough of it.