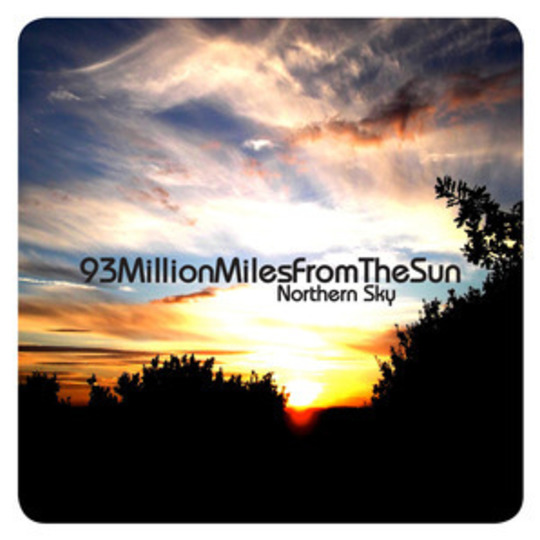 Hailing from the South Yorkshire backwaters of Doncaster is quite desolate even at the best of times. A town more renowned for horse racing, elaborate shopping precincts and stag and hen nights, it's hardly the quintessential location for a drone rock concept album. However, that's exactly what 93MillionMilesFromTheSun have pieced together. Recorded and self-produced over the past year in their hometown, Northern Sky depicts a very different place to the one highlighted on any local tourist information guide.

Having already carved out a reputation as one of the loudest bands on the underground shoegaze circuit thanks to 2009's self-titled debut and their often ear-splitting live shows, Northern Sky takes their sonic blueprint one step further into territories previously reserved for the likes of A Place To Bury Strangers. Now primarily a two-piece, the duo of Nick Noble and Rob Hogg are ultimately responsible for the vast array of sounds that encapsulate Northern Sky's brutal core.

A handful of these songs have already seen the light of day; opener 'Waiting There' was one of the highlights of last year's Northern Star Records compilation Psychedelica 4; the upbeat 'Sorrow Song' features on Patetico Recordings' disaster fund long player Rock Back For Japan; the brooding 'When You Come' was on this summer's Skyscrapers EP. But Northern Sky is a record that demands to be listened to as a complete piece in one sitting.

If 'Waiting There' and 'When You Come' set out Northern Sky's stall - slow carefully orchestrated build ups erupting into crushing maelstroms of white noise - then 'As Bright As The Sky' reveals a more subtle side to 93MillionMilesFromTheSun's make-up. Noble and Hogg's deft harmonies hark back to the days of Andy Bell and Mark Gardener, adding an ethereal touch to the drone-laden crescendo which guides them. Similarly, the pulsating loops that echo throughout 'Before You Leave' offer an insight into what Can and their ilk may have sounded like if conceived 40 years on.

Although comparisons to the likes of Spacemen 3 (circa Sound Of Confusion) or the Bravery, Repetition & Noise-era Brian Jonestown Massacre are inevitable, 93MillionMilesFromTheSun aren't averse to bending the rules slightly. Take the instrumental mid-point 'Tall Buildings In Large Cities'. Here Noble and Hogg employ a simple chord progression that builds then peaks into a kaleidoscopic wall of noise like Explosions In The Sky's 'Six Days At The Bottom Of The Ocean'. It's a brief diversion but one that settles the nerves for the heavily distorted couplet of 'All You've Found You've Left Behind' and 'Time Lasts Forever'. Both rise, soar and explode in equal measures, the latter erupting furiously before the soothing 'Echoes' offers another brief respite.

By the time 'Sonic Assault' brings Northern Sky to a close, its title self-explanatory as surging guitars collide with watery synths, 93MillionMilesFromTheSun's mission is accomplished in devastating fashion. Inspired by such nondescript surroundings, Northern Sky is a colossal statement that might not make Doncaster the epicentre of fashion just yet, but is certain to open a few eyes and ears to a part of the world generally dismissed by all but its inhabitants.