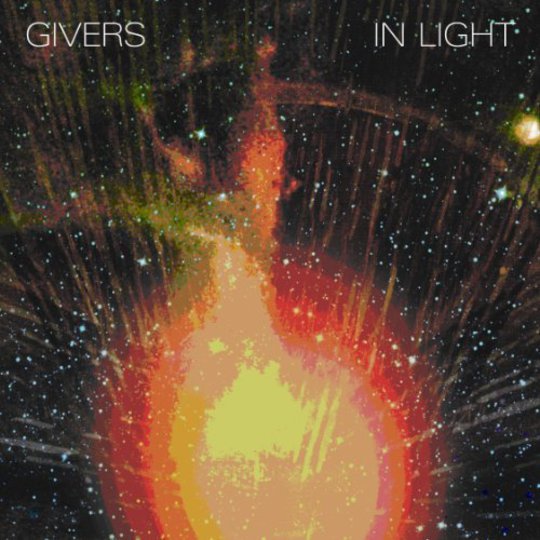 While a hundred and one indie bands are happy to pick at the bountiful remains of Nineties lo-fi, few have sought to follow the culture clash trail set by Vampire Weekend and Dirty Projectors. Whether this is down to general laziness or a tougher sound to emulate, music’s loss is Givers' gain. Percussion-driven jams and well-enunciated chanting may be oh so 2008 but since no real pretenders to the Afropop throne have emerged, who’s to blame them for having a crack at the whip?

Judged on musicianship alone, this Louisiana quintet are up there with their obvious contemporaries. Guitar, glockenspiel, pan pipes and pretty much every instrument bar the kitchen sink has been chucked into In Light’s potent cocktail. Remarkably, the album gels together rather well thanks to a fairly expansive running time of 50 minutes for just 10 tracks. The drawback to this unhurried approach to song writing is a dearth of immediate earworms, bar opener ‘Up Up Up’. “Oh we up up up for the below show / Yeah we down down here on the ground”, chants co-singer Tiffany Lamson as the band quickly whip themselves into a frenzy of booming synth and crackling drum rhythms.

This all or nothing recipe for chaotic revelry sees a huge array of eclectic songwriting strands thrown at a wall with many sticking around at the expense of an overwhelming listen. Songs like ‘Atlantic’ and ‘Go Out All Night’ sound great individually, yet when lumped together, the fatigue of being bombarded with so many ideas within the same tack begins to take its toll. The semi-acoustic rumblings of ‘Saw You First’ proves a welcome breather from this constant energy and even shows this restless collective to be romantically inclined when their vocals are afforded some breathing space in the mix.

While Givers might be short on sedatives, they’re certainly not lacking in charm. “You like your man ripe, I like mine still growing,” coos Lamson on ‘Ripe’ with a husky magnetism that’s near-on irresistible. Her interplay with fellow vocalist Taylor Guarisco is another of the album’s plus points, both matching their polar opposite voices to the best-suited material for them. The only song on the album which really doesn’t work is ‘In My Eyes’, the slowest track on the record. It seems when the band fall out of a hurtling pace, they’re at a loss as to how to occupy themselves, other than with a meandering chord progression.

Essentially then, there’s a whole lot that’s good about Givers. Enough to make you think this debut record won’t be their best by quite some distance. For the moment, In Light is hamstrung by its creators’ raw ambition. Once they learn to reign themselves in a bit, there’ll be no stopping them.