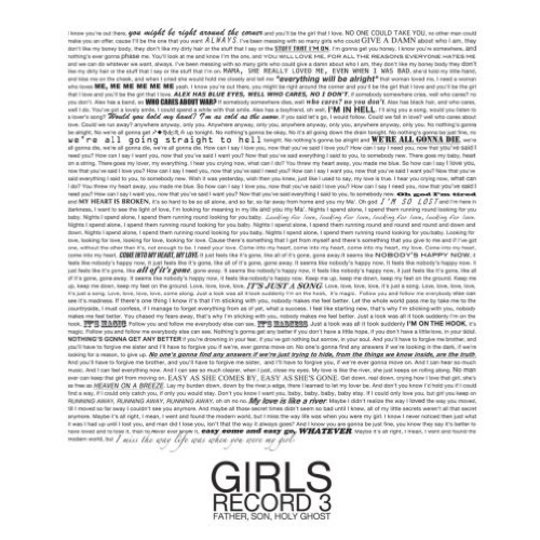 The well-documented background of frontman and chief songwriter Christopher Owens perhaps goes some way to explaining the schizophrenic nature of Girls music. Raised within the Children Of God cult, his nomadic lifestyle and general lack of stability hasn't just increased the number of topics he's able to write about. It's also provided him with the impetus - some would even call it a gift - to be able to view those subjects from numerous perspectives.

And boy are these guys prolific. Even as far back as March 2010 when DiS first sat down with Owens on one of Girls' first European sojourns, he told us there were at least 70 brand new songs in the vault, many of which were ready for public consumption at the time, several forming a focal part of the band's setlist on those initial UK dates.

It's also to Owens' credit that at no point has he ever come across as an artist content to sit on his laurels and take the easy option of churning out his recorded output and little else. Instead, there's an undeniable feeling that amidst everything else, Owens is something of a perfectionist, forever striving for significant improvement with every subsequent musing. Remarkably he's only recently packed in his day job - this despite being almost constantly on the road for the best part of two years. While that's hardly likely to engineer much sympathy from those of us ingrained in the daily struggles of nine-to-five mediocrity, it does go some way towards dispelling the myth that Girls is little more than an excuse for Owens and long-time partner in crime Chet White to fulfil their slacker ideologies.

In fact, they're, no longer a duo. Father, Son, Holy Ghost is actually the first album to feature more recent additions (in a studio sense at least) to the fold John Anderson (guitars), Darren Weiss (drums) and Dan Eisenberg (keyboards). At times, the added dimension provided by the more collective efforts of this five-strong unit pays dividends, displaying a hidden depth not always visible on Album, a record which while undoubtedly showcasing Owens and White's talents to a wider audience, occasionally sounded pretty much as it was - a bunch of demos cobbled together for a record rather than a carefully constructed album.

What's more, because of the stark contrast between many of the 11 songs on here, Father, Son, Holy Ghost is a more difficult beast to pigeonhole than its predecessor, which seemed to ensure Girls found themselves placed somewhere between the newer realms of shoegaze and discordant lo-fi shamblers in the grand scheme of genre classification. Take opener and current single 'Honey Bunny' for example. Its lolloping groove on the verses and heavily stomping chorus is deceptively reminiscent of Don't Give Up, Give Out era Primal Scream, Owens declaring "You're not my honey bunny, you're not my dirty cat".

If that slice of two-and-a-half minutes pop displays one side of Girls' mantle, then 'Alex' - clocking in at twice the length, shows a more mature, robust element, like The Jesus & Mary Chain during their Stoned & Dethroned period. The real eyebrow raiser from the outset is 'Die', a five-minute melee of driving guitars pummelled into one heavy rifftastic breakdown at its midpoint. Undisputedly harder and aggressive than anything else in their back catalogue, it could almost pass for a metal track.

However for the most part, Father, Son, Holy Ghost favours a more downbeat tack. 'Saying I Love You' takes the countrified road Teenage Fanclub trod so well in their mid-Nineties heyday, Owens admitting defeat over a former relationship ("How can I say I love you?...after you said that you feel the same, for someone new"). 'My Ma' imagines The Eagles covering 'Where Is My Mind' by Pixies, while sombre lead single 'Vomit' once again finds Owens "looking for love" in a similar way to Jason Pierce post break-up with Kate Radley.

Lyrically there is a common theme throughout Father, Son, Holy Ghost even if the musical arrangements vary. 'Just A Song' finds its creator stating "Nobody's happy now" while 'Forgiveness' declares "Nothing's gonna get any better if you're drowning in fear". At times it can make for uneasy listening, yet no one can dispute Owens' songwriting in general being a cautionary vehicle for its creator to pour the contents of his heart into. Rather than going out on a high, Father, Son, Holy Ghost revels in its own despair to the bitter end, both 'Love Like A River' and 'Jamie Marie' taking the listener on a journey to the bowels of Owens' aorta.

Altogether, Father, Son, Holy Ghost is a complex record, one that doesn't quite fully realise Girls potential as great recording artists, yet equally suggests that bona fide masterpiece may not be too far around the corner.