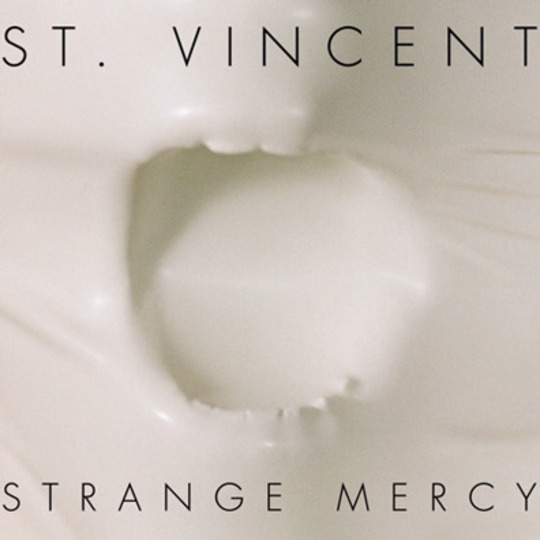 'Is it all a pose?' asks the girl, in a break between sucking on the last of her Gitanes. 'I mean,' she sighs, as smoke billows over her lips, 'I like St. Vincent, but is she, like, for real?'

If there’s any pose at all, it’s merely to distract from the fact that Annie Clark cares. She cares about sounds as soft as petals which hide the thorns below. She cares about guitar pedal combinations and whether her books are first editions. She cares, a lot, about a lot, not that she’d want you to realise.

Strange Mercy is an ornate and soul-bothering listen. Annie's voice seems as graceful as a swan, atop vintage amps which warp and distort 'til they sound like a fairground ride loop-de-looping through Tom Waits’ cochlea. The swirling textures, brash bursts of dizzying dentist drill guitars, and alien lazer Flaming Lips ‘guitars’, and the slightly-oblique lyrical collages of previous album Actor, are all still here on Strange Mercy, but there’s also a return of the sweetness of Marry Me. It’s an evolution of what’s gone before, for sure. This isn’t more of the same black‘n’white movie soundtrack-friendly songs that unfurl before becoming either dirty guitar licks or anti-climatic gorgeosity, because there’s something new here - it’s almost as though pixelated sunflowers and castle turrets have grown from the foundations of the albums which came before. It’s as if someone poured a rainbow of electric Kool Aid over Actor’s monochrome veneer. It’s like, totally, like, the stuff people like me, love. Most noticeably, atop the sea-sick drums (courtesy of him from Midlake) and Beefhearted-riffery (which could, at times be deemed somewhat ‘mathy’), there’s the introduction of a slightly angrier side to Annie Clark. Lines like “If I ever meet that dirty policeman who roughed you up, no, I, I, don’t know what” which have a fierceness that wasn’t apparent before, while “did you ever really care for me, like I cared for you?” has a post-desperate inflection that hints at revenge.

Then there’s the oblique references to the banking crisis (“When I say it’s going to be a champagne year...”) that feel riddled with the high-falutin rage you’d expect from a New Yorker-reading lady, who happens to have an axe to grind (and another to shred). And though it’s more like coffee shop disdain than hollering to reclaim the streets and picket the nearest business district, isn’t this gentle–poking-of-ideas-and-fears; these little glimpses of nightmares and utopias, amid the hubbub; a little more effective than any klangingly direct declarations? And yet when so many of the lyrics feel like newspaper cuttings or subtle references to great literature, it’s often a challenge to tell on which side of the line Annie Clark, really resides. ‘Surgeon’, for instance, takes its main lyrical hook from Marilyn Monroe’s diary, with "Best finest surgeon / Come cut me open," paraphrasing “Best finest surgeon, Lee Strasberg, come cut me open,”. So many other lines feel strangely familiar, not least the ‘Hallelujah’-ish phrasing on the heart-U-turning ‘Champagne Year’. Good artists borrow, great artists...yadda, yadda, yadda...

Much like Actor, it’s the contrast of tendernesses in both the red-raw and Elvis senses of the word, that marks St. Vincent’s music out as something more sophisticated and enthralling than it might first appear. There’s the graceful, comfy - and at times harrowing - Low-meets-Fiona-Apple side of her songs, coupled with a soccer-mom-friendly lightness that wouldn’t seem out of place in the background of Grey's Anatomy. But then there’s her humongous Big Black chuggeré, where sub-atomic guitar lines splutter dust from your speakers and which could comfortably see the metallers nod approvingly. The thunderous ‘Northern Lights’. The wind-chime Grizzly Bear-ish title-track. The heart and the hark! hark! hark! It’s this mixture of dissonance and elegance, which she experimented with on Actor but that runs throughout Strange Mercy; the continual lightSHADE effect, that is the sound of utter-utter-utter mastery.

Don’t be fooled by her tip-top indie-rock-positioning system (starts out in Polyphonic Spree, plays with Sufjan and Andrew Bird; appears with The National) because this is an album that rockets toward you, ricochets through your emotions and finally decides to lay you down on the floor, headphones on, tumbling around like a blissed-out cat in the sun. Don’t be fooled; at some point it will pounce. Don’t spin it just the once. Don’t be misled by the nerdy intricacy and flowery flourishes. Mostly, don’t be the girl I was too enraged to respond to.