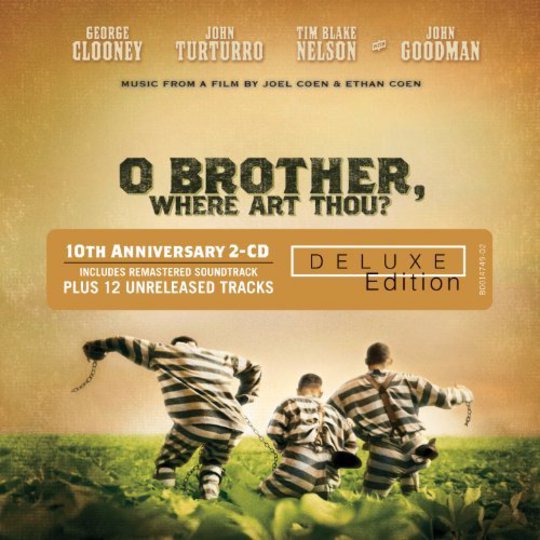 O Brother, Where Art Thou? is a not a great soundtrack because of the film, but a great film because of the soundtrack. Unlike most modern day cinematic experiences, the Coen Brothersa take on Homer's 'Odyssey' was as successful as it was due in no small part to the way the film was essentially sketched out using the musical framework in advance and then fleshed out visually. Scenes played out to complement and showcase the artists' efforts, often with the tone of the acting set out by the songs' delivery.

And it was a formula that was incredibly successful; not only critically but with official sales figures still stating that it'a amongst the top 10 best-selling film soundtracks of all time. Spin off concerts were held, forgotten careers rebooted and documentaries chronicling the process trickled out.

Ten years on, it still sounds pretty perfect. Expanded with a second disc, the entire film soundtrack is now available for the first time and with several other demo versions and excluded efforts added for prosperity. In truth, there is a reason why much of the latter were left out, with few tracks bettering the selected efforts. But it is a delight to hear some of the forgotten moments in the film taken in isolation; John Hartford's 'Tishomingo Blues' has a jaunty frivolity to it that's rather cheery, Van Dyke Parks' take on 'Big Rock Candy Mountain' revels in a fragile beauty that may have been out of place on the original score but is as appropriate to the film's development nonetheless and Norman Blake's 'Little Sadie' shines briefly but brightly. As to whether this additional disc amounts to enough on it's own to warrant purchase if you own the original, it's questionable. There are other interesting tracks and versions hidden here - such as 'Tom Devil' which I don't recall making the cut and 'Hogfoot' which did, but only in the background - but none seem 'essential'. They do round off a good package however and for those new to the score, will be a nice bonus.

And if you are new to the score, then you're in for a treat. It's a rollicking education in blues, country and bluegrass, evoking a time where tracks were recorded live in one take direct onto shellac, remaining accessible enough to lure you in yet diverse enough to never wear out it's welcome.

'I Am a Man of Constant Sorrow' is the track that the film is built around and a wonderful lesson in how effective a pressing vocal, catchy guitar line and some support backing can be. In truth though, there are tracks which outshine it. Opener 'Big Rock Candy Mountain' is wonderfully atmospheric, condensing everything the film is about into two minutes of minimal songwriting via imagery of farms, a sense of heightened reality, a whistling solo and the sound of a needle scratching the vinyl's surface. Alison Krauss' 'River to Pray' is an absolutely stunning piece of music, managing to be beautiful, ethereal and slightly haunting all at the same time (just hearing the opening note takes you to the stream the films' protagonists bathe in). The foreshadowing 'Hard Time Killing Floor Blues' still sounds wonderfully sparse but shot through with that delicate balance of feeling like it could unleash something almighty if angered and awoken. 'I'll Fly Away' is a duet between Krauss and Gillian Welch, a breezy little singalong which evokes sunshine and fields, and on 'Didn't Leave Nobody But the Baby' they're joined by Emmylou Harris too - effectively playing the sirens of the film who lure its three heroes to a sinful encounter - creating a hypnotic lullaby, building upon each subsequent layer with a slight addition of another vocal, whistle or eerie effect. And while the world probably never needs to hear 'You Are My Sunshine' ever again in theory, in reality when it's as great as Norman Blake's take then it's always great to.

Be warned though, there are songs with high pitched children singing on them.

The aforementioned accessibility and variety is one of the record's greatest strengths. Many modern day music fans would probably never want a dozen records by Alison Krauss or John Hartford but this soundtrack is a perfect snapshot and introduction to a series of genres many people know next to nothing about. Since I bought it I've gotten into Gillian Welch, who helped me discover Sam Phillips, who in turn opened up new doors to things I'd never consider to my taste. But more than a way into a genre, it's a perfectly conceived ode to a time we often romaticise and the foundations for one of Hollywood's most recent and charming products.