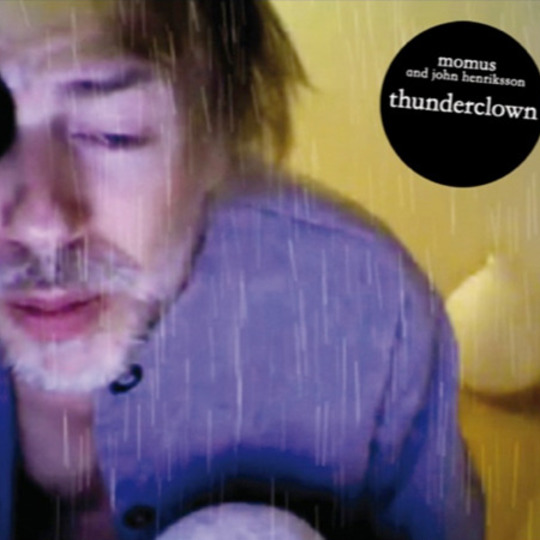 Anyone who remembers Belgian disco act Telex will know how effective farce can be when performed straight. Nick 'Momus' Currie could be their Scottish counterpart: a force on the alternative scene since the very early Eighties, he’s never failed to turn heads with his gonzo journalism and dangerous, unsettling lyrics. Jettisoned by Creation when Oasis sales soared, he spent the last 15 years in Japan, still recording the occasional diatribe while doing day-to-day stuff like blinding himself with Greek tap water (he now wears an eye-patch, full-time). Somehow he hooked up with John Henriksson, the Swedish vinyl nut and founder of accordion label Tona Serenad, and the pair have joined heads to develop Thunderclown: Momus’ third collaboration, and a record destined to mystify everyone with its sunny, skin-crawling genius.

To say Currie’s whole career has been building to Thunderclown is over-egging it, but followers or anyone curious about his back catalogue - whose highlights include Tender Pervert, Twenty Vodka Jellies and nearly-hit ‘Hairstyle of the Devil’ - will do somersaults when they hear what he’s done here. In short, he’s retched up the most blackly romantic masochism a human being can stomach and set it to a Tom & Jerry soundtrack. Henriksson’s creaks and circus noises, so beautiful on his own releases, add a necessary veneer of cuteness, and make Thunderclown sound like Darren Hayman at a steam fair. ‘Precocious Young Miss Calloway’ is a safe place to start: listening to the bass and whimsical lyrics you’d think Vivian Stanshall is still alive, and has found a mouthpiece he can insult everyone on from the grave. ”Precocious Young Miss Calloway / Impressed some person’s pants away / With a clever conversation studied from a magazine / So pass the pancakes, pretty please / Or else I’ll strip myself and tease / My orgiastic organ to an ecstasy of joy…” It gets stranger: ‘The Teacher’, a tale of misread signals, moves from straightforward memories of back-of-class erections to humiliation, rage and framing your Head of Year with a USB of porn. As it rolls on Henriksson breathes out the ghost of a melody, making the song a very, very deformed cousin to ‘What I Go To School For’ by Busted.

It’s Henriksson’s input that serves as Thunderclown’s special sauce. Although Momus’ narrative can be twisted/unacceptable, John Henriksson’s production keeps him on track, making sure the Scot never reverts to his usual shock subjects (necrophilia and injunction-protected celebrity gender swaps). The stories might feel like bloopers from Jam but Henriksson gently sugar-coats them, making tracks like ‘The Criminal’ wholesome and fun. A vicious little ode to holidaying while dumped, Momus’ coo of ”I am wondering through Paris carrying an imaginary gun / And murdering everyone / Without you I’m just a fool / A criminal” is sweetened by lapsteel and vibraphonette, making you feel for the nutter with the eye-patch. It’s like wanting to make cocoa for Blackbeard.

The best moments occur when the two showmen synchronise, and Momus’ diary entries fuse with the beats and celestas. The farting Casios of ‘Love Wakes The Devil’ make a strong opening hook, and unusually, don’t drink up the remaining energy on the record. ‘Shangri-La’ and its reference to Uncharted 2 unveils a delicious tinkling underworld. Even the nonsense tracks like ‘Baloney Polonius’ manage to mix frog croaks, whistling and automatic gunfire into something you could play with the window open. The Thunderclown album is one clever little pantomime, as listenable as it is anarchic and with so much bile under its surface it’s a wonder the case hasn’t got ulcers. Currie’s so dedicated to hoeing the subconscious he even tries to warn you off himself, singing ”Do not listen to the Thunderclown / Because of what he’s done / The places he’s been, my dear / The things we always fear / Just keep calm and carry on / By twilight he’ll be gone”. A clever little epitaph, and the first of two goodbyes. The second is hidden in the sleeve: 'I dynamited Phil Spector out of prison and flew him to Osaka to produce this, so I really hope you like it'.

A Winged Victory For The Sullen