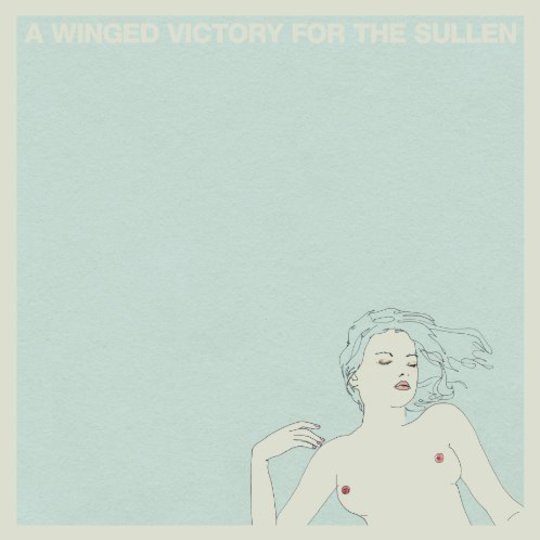 I suspect we all have those fragmented memories of early school experiences. Those amnesic shards of icy-grassed playing fields, of teeming lunch halls and numbing assemblies. Oddly enough, A Winged Victory for the Sullen’s evocative debut recast a specific strand of these nebulous recollections in the front of my mind. Remind yourself, if you can, of the old, decaying astronomgy VHS screened in lifeless physics classrooms, the sort of tape that would jar every few minutes with static bursts, the sort narrated by an innately calming character of the Attenborough construct, the sort presented under an uninspiring and hackneyed title (The Galaxy and Beyond; The Fabric of our Universe). The two share nothing in appearance or purpose, but there’s a balance between the gezelligheid of the dimly lit room with the indistinct narrator’s voice mumbling quietly in the background, and the unknowable vastness of the subject matter leading you slowly into daydream that relates to this record. It’s a trade-off between a sheltered intimacy and incomprehensible expanse that’s at the heart of these seven compositions.

In somewhat more tangible terms, this new Erased Tapes release is a collaboration between Dustin O’Halloran (who’s garnered reputation for being an adroit piano man of the ‘contemporary classical’ genre), and Adam Wiltzie of Stars Of The Lid (who aside from being one of a select few that I consider able to challenge Eno’s shiny skull for the ambient throne, can also count the distinguished honour of inspiring the nomenclature behind Joe Marshall’s thoroughly enjoyable ‘Articulate Silences, Ambient Sounds’ column amongst their accolades).

After being introduced to one another in Italy whilst Wiltzie was on what would, tragically, turn out to be the final Sparklehorse tour, the album was recorded in a number of different spaces, including the Grunewald Church and the DDR radio studios, with a rotating supporting cast that included Erased Tapes’ multi-instrumentalist sentinel Peter Broderick, and Icelandic cellist and consummate collaborator Hildur Guðnadóttir.

All things considered, the record was bound to be one elegantly balanced between classical instrumentation and sweeping ambience. Overblown title aside, ‘We Played Some Open Chords and Rejoiced, for the Earth had Circled the Sun Yet Another Year’ introduces the general framework of the album pretty efficiently – as Wiltzie weaves strings, guitar and electronics into the subconscious, O’Halloran’s plaintive chorale whispers its way along a trail between marvel and misery, guiding the listener through the infinite ambience below. Perhaps the best example of this duet-of-sorts is ‘Minuet for a Cheap Piano Number Two’. Like many piano-orientated composers of O’Halloran's ilk, the timbre of the instrument isn’t thought of as a fixed constant – here he mutes the sound (this ‘dampened’ sound is also a prominent feature of Nils Frahm’s upcoming Erased Tapes release, Felt), and then unravels a minuet of ragged elegance, a brief moment of beauty found in the rubble after the previous track has dissolved to dust, and before the towering atmospherics reappear. Towards the end of the three minutes, there’s a glance upon darker shades, those of trepidation and unease - a victory indeed, considering this particular genre’s habit of getting stuck in the realm of unflinching nostalgia.

Standout ‘Steep Hills of Vicodin Tears’ is notable for the fluid, putty-like strings that populate it. It strikes as the most well rounded of the record’s seven tracks, as developed an idea as it is free of unnecessary embellishment. There are only two other instances where strings take such a prominent role: towards the end of ‘A Symphony Pathetique’ (a rare instance where the ambience grows and spirals upwards to envelop another of O’Halloran’s delicate piano hymns rather than accompany it), and ‘Requiem For The Static King Part One’, an important and poignant centrepiece of the album. The ‘Static King’ in question is the late Mark Linkous, and the two-part requiem the best example of this music that acts as a line of symmetry between a cosy affection and boundless imagination. ‘…Part One’s’ sorrowful string quartet serves its function as a consoling prelude, as the warming scarf that allows you to stargaze in these rapidly cooling autumnal evenings, while ‘…Part Two’ is the skyward, open-mouthed gazing itself, O’Halloran’s meandering piano melody suspended over a groundwork of broad ambient brushstrokes once more.

A Winged Victory For The Sullen’s self-titled debut is a nocturnal meditation for solitary contemplation, a celestial incantation to silence all commotion. While Wiltzie and O’Halloran both have their obvious contemporaries to draw parallels between (Hammock; Eno/Frahm; Arnalds), this emotive disc balances a hushed intimacy and vast expanse that places it in a unique sonic terrain.