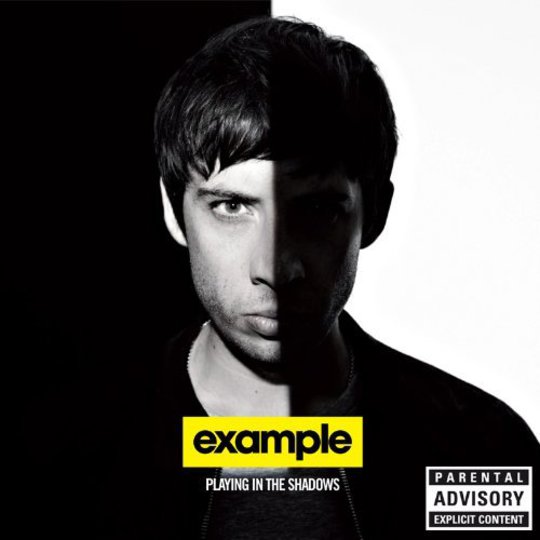 There’s no denying these are halcyon days for British urban music. For what Tinie Tempah, Professor Green and Wretch 32 lack in critical acclaim, they overcompensate for in chart success. Since Dizzee Rascal first made his small fortune off the template of hip-hop lyrics married to a cheesey dance beat, nearly every one of his successors have been tripping over themselves to follow suit.

Example had flirted around the fringes of British hip-hop since 2006 when he first released ‘Vile’, an amusingly bratty response to Lily Allen’s ‘Smile’, through Mike Skinner’s ill-fated Beats label. Once ‘Dance Wiv Me’ went super massive though, all bets for credibility were off and sure enough the Oceana romance of ‘Kickstarts’ made for a summer smash last year. Having finally got his big break, you’d be a fool to think Elliott Greave is going to piss it up with any avant-garde turns on Playing In The Shadows.

That’s not to say this third album from the Fulham-based rapper isn’t a progression of sorts. Having positioned himself alongside the monolithic Pendulum and Chase & Status in an interview with The Guardian, Example fully delivers on his promise to cater 'uplifting rave music' to the masses. ‘Changed The Way You Kissed Me’ is a fine show of muscular bravado which skyrockets further into the day-glo stratosphere with each anthemic surge of bass. “I guarantee you’ll miss me,” sings our swaggering lothario, “because you changed the way you kissed me.”

‘Stay Awake’ is no schmuck either. Its ‘don’t party too hard’ lyrics revel in the irony of an intended audience who are thoroughly prone to being off their tits. Notwithstanding these flashes of brilliance, Example’s strengths are consistently proved to lie away from the spoken word. Firmly rooted in the Ian Brown school of ‘A rhymes with A, B rhymes with B’, there are so almighty clangers featured on Playing In The Shadows they seemed worthy of a top three list.

Hopefully no further clarification is needed to determine whether Example’s latest album is for you. Fans of subtlety would be best advised to steer clear but gaudy electronic paeans in the form of ‘Natural Disaster’ and ‘Wong In The Head’ will doubtless form the soundtrack to many a lairy night out. You don’t have to be shitfaced to appreciate some of Playing In The Shadows. But to grasp its entire armoury of formulaic geezer-rap, several WKD Blues wouldn’t go amiss. Let’s be honest, they are unlikely to.