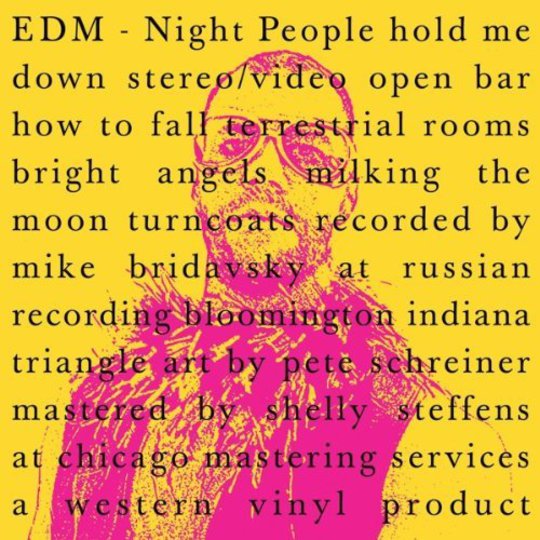 Twice now, Daniel Burton’s come late to the party for bedsit genres already exceeding capacity. As loose labels applied to often unrelated acts, Slowcore and Post-rock have their globally acclaimed bands (in Galaxie 500, Low, RHP / SKM… Mogwai, GYBE!, Sigur Ros), plus they have their cult acts whose allegiance to each camp we can debate interminably (Ida, Codeine, Bedhead & The New Years, Slint and Papa M). One thing we tend to agree on: second-wave bands of both stripe became formulaic by the turn of the millennium, making it doubly difficult for a band that sounded like a fusion of each to get attention, rather than being hailed as equally vital.

Early Day Miners (2001–2009… or should that be “2001 – present”?) were that band. From their very first album, Placer Found, they had the sophisticated ambience you could truly inhabit; they had 'proper' songs and also the long-form soundscapes side-stepping the crescendo-rock formula; most importantly, they had a lyricist and vocalist surpassing most of the above, with his powerful evocations of American wilderness, and a yearning for spiritual meaning, post-9/11. All of their albums are essential for genre fans, but Let Us Garlands Bring, All Harm Ends Here, and Offshore are crossover masterpieces that should be on the shelf of every indie fan.

Why 'EDM', then? Before the release of Early Day Miners' The Treatment (2009), Burton was having a rough time, alluded to in a few songs, but more so by the tension across the whole record between the most upbeat rock – and the most experimental tracks – yet released. The urge to show the world what he could do with anthemic indie-rock (‘The Surface of Things’, ‘How to Fall’, ‘In Too Deep’) fought with a more artistic instinct (hence the prominent mechanical rhythms of ‘The Zip’ and ‘The Treatment’ with fragmentary voices apparently lost in the machine).

Night People announces itself as a clean break, but it’s more like a re-shuffling of similar elements. The last album opened with a slightly stilted question "We’re going out to-night / Won’t you... join us?" and in a sense, it’s the opener for both (for a start: there’s a 'We' and a 'You' involved for the first time, instead of a tacit, ghostly 'I'). After all those years of prowling desolate landscapes lit by flickering streetlamps, Burton’s turned back to the bars blaring the tacky music he avoids, and realized the people inside weren’t shallow hedonists who wouldn’t understand, but potential kindred spirits who understand far too well. As such, the first three tracks here have a similar chugging rhythm, melodic simplicity, and emotional transparency. The transition’s a lot like Jason Molina assembling the Magnolia Electric Co. so as to have a gang of drinking buddies who (dare I say it?) know how to boogie, rather than a shifting cast of artistes to realize his dark vision for Songs:Ohia (who were produced by Burton himself, once-upon-a-time). There are some clever touches: the hoarse multi-tracked chorus that replies to: “I hear voices on the stereo / Won’t You Come Back?!” Otherwise, though, it’s a pointed renunciation of the old.

Halfway through, things change a little; Burton’s reluctant to let go of the past because – damnit, the past was a good thing! A new version of ‘How to Fall’ plays it like Low or the Velvet Underground: a stripped down duet for hushed male and female voices, stumbling out into the dawn, and shedding some of the grace-notes of the original as if the singers can’t quite reach them, or remember the tune. Then, the delayed guitars come in, and carry the song heavenwards. The two tracks that follow are among the strongest Burton’s written: the duet of ‘Temple Bar / Bright Angels’ enacting a seduction between exquisitely masculine & feminine voices without a trace of the kitsch that can mar Nick Cave’s duets or Lanegan & Campbell. Distorted guitars blaze beneath the cooing, wordless vocals at the close. As in the past, Burton evidently wants you to hear the album as a suite of songs, because a long outro merges with the intro of ‘Milking the Moon’, an eight-and-a-half minute instrumental taking you through the rest of the night (oh, and showcasing the excellent rhythm section). Utimately, Night People is more of a re-shuffling than a re-invention; proof that it never was broke, but you’ve got to love a band this determined to fix it.