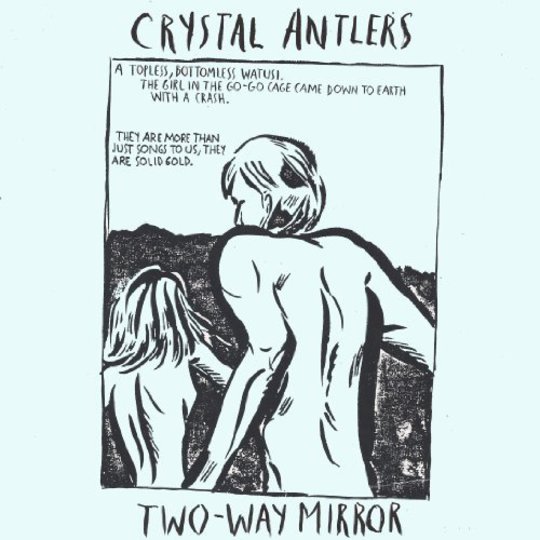 Originality is a consistently overrated musical concept, to my mind at least. For every single barnstormingly executed piece of genre cut-and-paste, there’s a thousand awful prog rock mutant halfbreeds. There are occasions, upon reading Pitchfork or (more frequently) its cooler little brother Altered Zones; when I fold my arms and may be heard to exhale aloud “Just write something that sounds like The Stooges, please?” It often feels that musicians have forgotten that passion, conviction and intensity can more often than not be just as good an idea as…well, a good idea in itself.

Crystal Antlers certainly play with passion and with intensity, working around a good old fashioned format: play it loud, play it fast and most of all, play it loose. Their self-titled EP could have been, and probably was, mistaken for an unreleased set of Comets on Fire Blue Cathedral-era outtakes. But there was precious little wrong with that: over six tracks, it hummed, howled, fuzzed and generally kicked like the proverbial mule. The album that followed it, Tentacles, was sadly more noted for being the final release on cult label Touch & Go than for the music therein contained; to this listener it felt like the band had abandoned their raw sound and with it their intensity.

Second album Two Way Mirror continues the mellowing out somewhat. Even though the squall of an organ or effects pedal frippery lurks in the background of most of Two Way Mirror’s tracks, there’s more of a lineage to be drawn to the pyschedelia’s earlier, lighter incarnations, rather than the elongated batterings meted out to the genre by later revivalists. Certainly, tracks like ‘Sun–Bleached’ and ‘Fortune Telling’ have a lighter, more airy feel to them, partially lent by singer Joey Bell’s new found register. Rather than howling and reaching for notes, he’s developed into something of a singer, delivering his lines with something of a melodious croon although still allowing himself the odd unearthly howl, as on ‘Jule’s Song’.

The problem is that this new lighter sound isn’t continuous across the album. Just like on Tentacles, the band seem to have lost the intensity that seeped out of their debut. Tracks like the howling whirlwind of ‘By The Sawkill’ and the throbbing ‘Two Way Mirror’ feel somehow dullened, more often than not leaving the listener craning to hear a guitar that by all rights should jump off the record.

The responsibility lies partially at the production desk, where Ikey Owens (The Mars Volta) has made the decision to bring the organ and vocals to the fore, whilst keeping the drums to a gentle flicker. The unintended consequence of this on much of the album is to the render the band nearly indistinguishable from myriad other garage rock bands: Crystal Antlers don’t have the songwriting chops of The Fresh & Onlys, and lack the inventiveness of John Dwyer’s Thee Oh Sees. It’s frustrating hearing a band previously so unchained in their approach and with such a ferocious live act sound so restrained on record.

A further issue is that the tracks feel for the most part too short for the medium in which they’re being played. Crystal Antlers still seem to want to blast out Sixties pyschedelia with the speed and intensity of garage punk, yet most of the time they wind up playing short songs at mid-tempo (‘Knee Deep’, ‘Always Afraid’) which contributes to making the album breeze aimlessly by.

But there are signs here that Crystal Antlers are heading for something better. ’Dog Days’ and ‘Summer Solstice’ are two of the record’s more melodic and stand out cuts. The tempo is slowed, and whilst an occasional buzz or hum might fill the background, the instrumentation lacks the heaviness and density attempted elsewhere. And when a solo rips out at the end of ‘Dog Days’ it’s loose and free, rolling out and not kept suppressed by a fog of organ and percussion. Here, at their quietest, the band sound comfortable with their sound, rather than awkwardly fitting song structures and styles together. Bell’s vocals float perfectly over chiming guitars and wandering solos that drift along the beach front. It’s hazy summer music that feels not only authentic, but also charming and honest.

It’s this which saves an unexpectedly bland record somewhat: in a year filled with several great pyschedelic releases, Crystal Antlers have delivered a record that, rather than making good on the promise of their early work, is simply serviceable. But there’s evidence here of a band still finding their feet and defining their sound. And maybe the next record is the one where they get it nailed down and produce something really worth writing about.