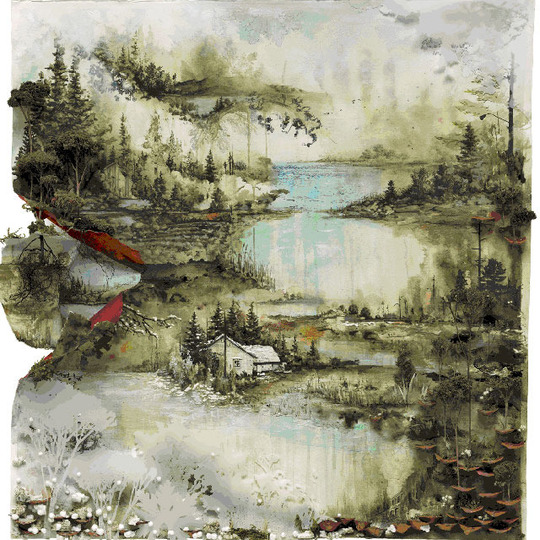 Change, change, change. I was unexpectedly moved by the half-season finale of South Park recently, which addresses the notion that as you grow older, things you used to love start to seem inconsequential and a bit shitty; relationships strain and alter; people flounder, hurt those around them and ultimately move on. The episode ends on a note of uncertainty, a genuinely touching montage playing out to Fleetwood Mac’s ‘Landslide’. I suppose it’s how you regard songs like that that will determine what you make of the eventual left-curve Bon Iver’s Bon Iver throws us… or maybe not. Justin Vernon and his crew have changed things up here for sure, but the results are every bit as beautiful as you might expect.

Of course, replicating For Emma, Forever Ago wouldn’t have worked, would have felt cheap, that record being so deeply rooted in one place and time. Instead, the band has swollen considerably and built on certain aspects of what made it so striking. Vernon’s voice – an expressive, enchanting thing – is instantly recognisable, and he’s still capable of wrenching every ounce of emotion possible from his songs. It’s a more polished affair than the occasionally rough-hewn debut, synthesisers and saxophones (and space, so much space) guiding and colouring its frosty soundscapes. Lyrically oblique, its power stems from Vernon’s odd turn-of-phrase and heartrending delivery – it’s best just to let that voice wash over you, letting the images manifest in their own time.

Because Bon Iver does take time: it’s not as instantly captivating as For Emma…, but given the circumstances which led to that album being recorded and the fairly universal emotions it taps into, it was never going to be. The concept here is one of cycles and seasons (specifically winter), reflected in its chilly aesthetic and bookending songs, ‘Perth’ (birth) and ‘Beth/Rest’. The idea of home, geography and the importance we endow upon our surroundings is important, too: the whole thing was recorded in a studio Vernon and his brother converted in Fall Creek, rural Wisconsin, three miles from the house he grew up in.

‘Perth’ is a muscular opener, built around an escalating guitar shape, spectral vocals and a sharp, militaristic snare, its central lyric: “Still alive, who you love.” The song spins into a messy, loud climax buoyed by warm horns and crackling electric guitars before receding in order that the louche ‘Minnesota, WI’ can shuffle into view, Vernon swapping falsetto for a deep, assured vocal only displaced in its chorus. He has spoken of the record as a direct continuation of For Emma…, and it’s not too hard to imagine the stacks he refers to here being the same ones contemplated in that set’s peaceful closer.

It’s also very much an album in two halves. On ‘Michicant’, a song shot through with nostalgia, Vernon’s lyric dwells on his younger self, asserting at one point that “Hon, it wasn’t yet the spring.” This is halfway through the LP, at which point its songs – which are hardly straightforward to begin with – take a turn for the abstract, based more on piano shapes and soft, needling sounds than anything that could be cooked up on an acoustic guitar. ‘Hinnom, TX’ opens with a reverb-drenched set of piano chords that ripple and expand like concentric circles, while ‘Wash’ boasts perhaps Vernon’s most affecting vocal performance to date, all against lilting strings, pedal steel and plaintive ivories. And though there’s nothing here anywhere near as direct as ‘Skinny Love’ or ‘For Emma’, songs like ‘Calgary’ and ‘Towers’ are more in keeping with a traditional sound than the majority of the LP, both blossoming into lovely full-band efforts as they wear on.

And of course, there is ‘Beth/Rest’, which closes the album. It’s not difficult to understand why some Bon Iver fans have been horrified by this song, so wholeheartedly does it embrace Eighties soft-rock trappings. Yet it’s more or less in keeping with the spirit of Bon Iver, and after the Blood Bank EP and the great fun Vernon clearly had as part of the Gayngs ensemble it shouldn’t come as too much of a surprise. With its auto-tuned vocals, airy drums and orange sunset synth, it does sound kind of like a relic; exactly the type of song that could soundtrack a montage detailing how although everything changes and people grow for better or worse, life unsparingly, inexorably marches on.

It makes sense, though it might not seem to at first: it’s a surprising, unusual finish to an often surprising and unusual album, one which confidently sketches out a blueprint for the band far beyond anything Vernon could have dreamt when he first decamped to his father’s cabin in Wisconsin.