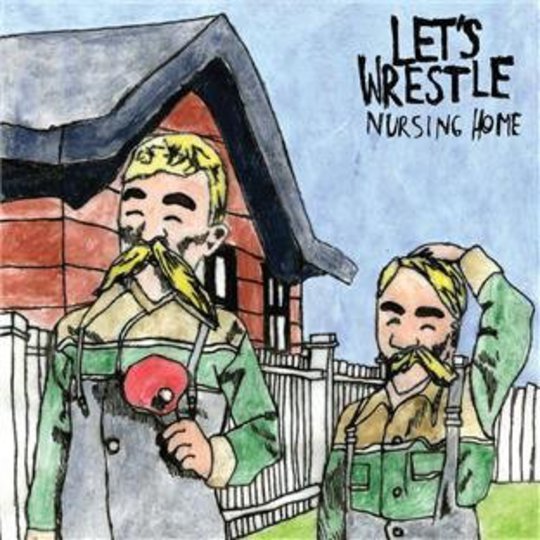 Let’s Wrestle haven’t written a sweeping, decades-spanning concept album about daily life in Britain throughout the industrial revolution. They haven’t started using foreign instruments with names comprised of more than two syllables to make sounds that they insist were only inspired by music created pre-1918, (because, well, that’s all they listen to now anyway). They haven’t penned a portentous lament (with a delicate undercurrent of hope) about conflict in the Middle East, and they haven’t even written a song that’s a metaphor for the war in Afghanistan. But there is something slightly different about Let’s Wrestle. On Nursing Home's opening track ‘In Dreams Part II’, things seem in perfect order when Wesley Patrick Gonzalez sings of how a Pokemon gets punched in the face (Pidgeoto, poor fella), while the music is scrappy and frayed, wonderfully, throughout. But if debut In The Court Of The Wrestling Let’s was the giddy spin of a colour wheel, then Nursing Home feels ever so slightly more unified in tone and shade, and, if not exactly refined, than certainly a little tighter and more focused in its abandon.

When speaking to the band last year for the re-release of their debut, I asked Gonzales about the use of humour in music. In relation to his own work, he felt that people might sometimes be inclined to register the laughs but block out the fact that ‘there’s a huge amount of, “this is shit” too’. On Nursing Home, there’s still a huge amount of ‘this is shit’, and in turn, a huge amount of ‘I’m so fucking tired of this shit’. Equally, there’s a hefty amount of ‘you’re a fucking idiot’ but also an equally persistent amount of ‘but I’m probably a fucking idiot too, sorry’. Let’s Wrestle tap into the classic English ability to revel in the murk of their situation and draw on the humor inherent in that, but even so, the result here is still a dark collection of fundamentally flawed human beings continuing to bump into the same walls and trip over the same curbs, laughs or no laughs.

‘In The Suburbs’ is an inspired twist on a subject that usually only appears in popular music to denote the desperate need for escape into the wider world. Here, however, the suburbs are one giant womb to keep us warm and coddled away from all the troubles, decisions, confrontations, disappointments, people, obligations, efforts, failures etc etc. Life, basically. "In the suburbs, I’ll have dinner with my mother and play computer games all night…because I feel so safe here". The apathy continues on ‘I’m So Lazy’ where our hero is so numb and languid, even sleep is too much effort. He perks up on ‘Bad Mammaries’ but it’s only revulsion that rouses him from the stupor to direct invective at a lady of age who seems depressingly intent on proving that her (mostly curdled) milkshake can still bring all the boys to the yard. ‘For My Mother’ however, is a frail lullaby for God’s greatest inventions and the only thing that could really inspire our hero into action when his mum struggles through a family bereavement. "I'll walk the dogs… I will take them out for hours". There surely aren’t enough songs about boys showing love for their mothers, but of those that do exist, this is probably the best and further proof of Let’s Wrestle’s idiot-savant genius.

Once, when slightly over-tired and not really thinking about what she was saying, a friend described her perfect living arrangements. There was lots of talk about getting looked after and having stuff done for you, and soon I had to point out that what she was actually describing was a nursing home. This, however, didn’t seem to put her off and she decided that they should probably have those for perfectly healthy young people. Maybe the naming of this album was an allusion to a similar feeling, an existence where nothing is really expected of you and all basic needs are catered for, hidden away from the steady buzz of bullshit and perpetually soothed by the soft lilt of Saturday afternoon programming. Let’s Wrestle might not want anything more than a comfy chair to call their own, but let's hope there’s more of these exhausted hymns to come before they disappear forever to get settled for Quincy.