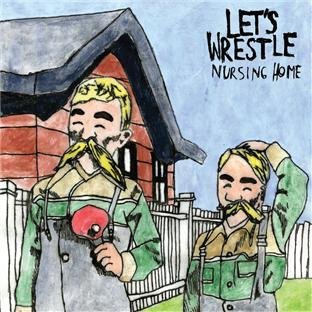 A dark collection of fundamentally flawed human beings continuing to bump into the same walls and trip over the same curbs, laughs or no laughs.»

'nursing home', the second album by let's wrestle, was recorded in chicago with steve albini. with themes that include being trapped in the suburbs and dancing boys on drugs, the band show that their view of the world is the same, they've just put on some darker sunglasses. let's wrestle may have lost some of their naivety lyrically, but it's certainly still there. 'nursing home' is heavier than its predecessor, maybe due to albini's engineering, but the underlying melody displayed previously remains, with the few quiet songs on being perhaps the most poignant the band have recorded. let's wrestle have grown up and reckon they're heavier and depressed but they're still laughing on the inside.
description from www.roughtrade.com