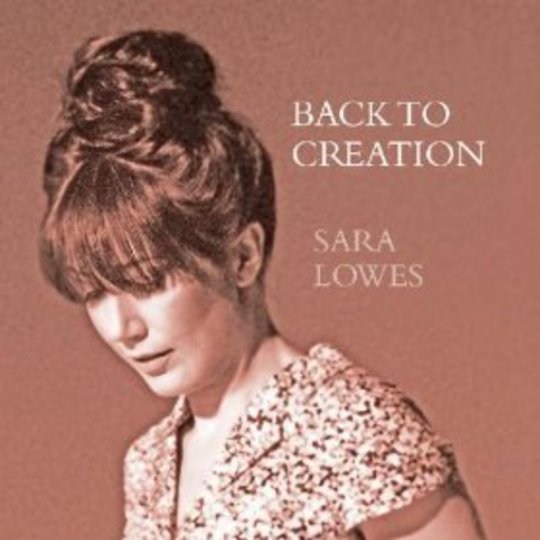 Sara Lowes’ debut record, born and raised within the characteristically smoky haunts of jazz and midnight Sixties classic pop, helps to highlight another in an increasingly long line of artists from Manchester who are burying the stereotype of Britain’s most curious musical city and neatly raking the dirt back over the grave. The belated rediscovery of Joy Division and the continued looming spectres of Oasis and The Stone Roses do their best to perpetuate the myth that Manchester hasn’t moved on from the past; while in all honesty, nothing could be further from the truth. The city is awash with taut, exciting, raw electronic, post-rock and alternative bands who are carving their own niche into the greying, granite walls. And Lowes comes from another stable, part of an increasing assortment of fascinating artists rising from the assorted clichés of Manchester with their own northern, skewed jazz-pop influences.

Sonically, Back to Creation is an engaging and multi-layered listen featuring impeccable musicianship (including a significant contribution from the ever-wonderful The Earlies) and a fresh, vibrant tone that perpetuates from the first note to the last. From the intertwining horns and sharp harmonics of ‘Single Girl’ to the cyclical stomp of ‘Bite The Pie’, Lowes and her entourage work best when they throw everything into a stirring, chaotic pile of sound from which the songs emerge. The whole record has an element of a rolling street carnival about it: brass and clatter march past to be replaced by slow piano motifs before the tempo picks up again and the party restarts with vigour. Credit is due to Lowes and her band for altering their tempos and creating a rich concoction of sound, with a pleasing blend of soft, melodic piano-led compositions (‘You’ is truly gorgeous) rubbing shoulders with swooping rises, falls and squalls of powerful, building melodies (‘Vapour Trails’, ‘The Island Spell’). In many ways, it harks back to the classic Sixties era of British Female Pop in its blend of sweetness, sadness and unequivocal prettiness. The only nagging concern with Back to Creation is that while it continually sounds engaging and interesting, there isn’t an obvious standout track that peaks into anything that you could see troubling mainstream playlists or your own best tracks of the year list. Which in itself isn’t a bad thing, but there is a need for an album like this to give something new and unique to the world in order to be fully appreciated and propelled to the next level of recognition. Musically, it pushes all the right buttons (layered harmonies, lush piano, brass flourishes) but at times, it can struggle to maintain the undivided ear of the listener over the course of the entire record, especially during some of the middle section of the record which at times comes across as a touch undercooked, unfulfilled and identikit.

Having said that all that, the album ultimately wins its way into your affections despite its flaws. The primary reason for this, despite the impressive combination of talented musicians, is predominantly due to the striking, warm charms of Lowes herself, who ends up gamely picking the record on her slender shoulders, carrying it and lifting it beyond the middle ground it could so easily end up inhabiting. She has an odd and charismatic voice: part seductress and part smothering, mothering elder that covers each song with a curious, thick and warm blanket and to colour in the blank spaces, gives the album a genuine personality that it otherwise may have lacked. And in the overall summation, the singing, the enthusiasm and the genuine charm of the instrumentation eventually ends up winning out: polishing the rough edges of a record honed and crafted with intelligence, care and clarity. Sara Lowes has established her territory, modus operandi and individuality; it won’t take too much development and invention to turn bronze into gold.