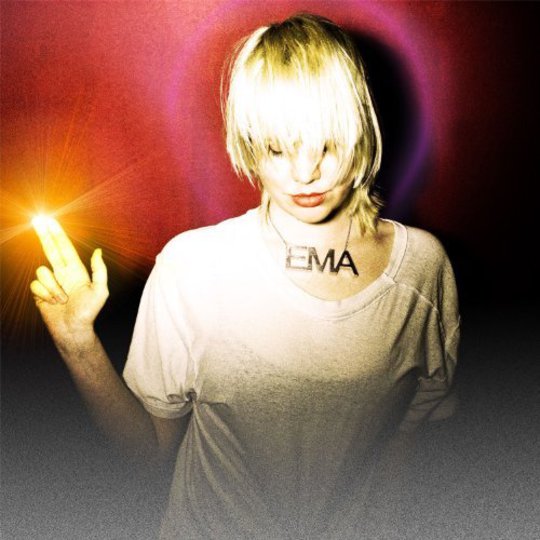 “She’s basically one of the best things that’s happened to music for years. And that’s not some PR hyperbole nonsense, I genuinely believe this. I fear I might lose my mind when I finally see her live.”

So wrote Erika M. Anderson’s online press officer after delivering a copy of Past Life Martyred Saints to my inbox. Of course, she has a vested interest – it’s her job to promote the artists in her roster – but even taking her position into account, it’s warming to see such honest enthusiasm. (I used to do press for a living myself and man, is it difficult sometimes.) Her sentiment is one echoed across the Internet by blogs and broadsheets alike, where EMA is riding a wave of such collective goodwill you can almost envisage the end-of-year accolades already. Which is both odd and enormously exciting, really: how the former member of a combustible (eventually combusted) noise-folk act – who hails from South Dakota, possesses an unremarkable, if expressive voice and predilection for Danzig, Tool and Guns N’ Roses – has whipped the modern music media into a state of frenzy the likes of which we haven’t seen since… well. At least not this year.

That previous group was Gowns, whose sole album Red State (2007) has variously been described 'relentlessly bleak, musically unpleasant, and unflinchingly ugly' and 'like some forbidden text pronouncing heretical truths pressed into hesitant hands.' It’s kind of both, though an uneasy beauty lurks beneath the surface (like here, at three minutes 12 seconds), and it also constitutes an entirely logical forebear to Past Life Martyred Saints. Anderson steered that group with Ezra Buchla (a founding member of experimental LA punk outfit The Mae Shi), their fractious relationship defining the band and leading to some apparently remarkable live performances. His presence can be felt on this new record, both as a contributor and inspiration. (Anderson on their dissolution: “We were young, we were crazy, and we were in love. Or maybe we weren’t in love.”)

Which isn’t to label PLMS a break-up album. It’s more a fresh start than a bitter end, Anderson finding her voice and indulging her love of low and high fidelity against a backdrop of searing noise and the kind of incendiary electric guitar that made her 16-minute cover of Robert Johnson’s ‘Kind Hearted Woman’ so irresistible. If 'harrowing' seems to be the word most bandied about regarding Red State, then 'defiant' ought to be the adjective of choice for Anderson’s solo debut, which dives headlong into some pretty murky waters and comes out swinging.

The record has drawn comparisons with the work of artists from Cat Power to Lift to Experience, Siouxsie to Sonic Youth, all of whom were no doubt influential to a degree. It’s the emotional intensity present, though – the sense that Anderson is throwing her entire being into these songs – that impresses the most, giving the album its own aesthetic. And not only at its bleakest: though the repeated refrains found in songs such as ‘Marked’ hit pretty hard (“I wish that every time he touched me left a mark”), against the glistening, almost euphoric shards of sound that make up ‘California’ Anderson makes lines like “I’m just 22 / I don’t mind dying” sound more like expressions of triumph and a life well-lived than anything glib or melodramatic.

This dichotomy between the ominous and the jubilant is riveting stuff, and evidently a major part of why Anderson’s appeal has proved so all-encompassing. Elements of drone-rock and folk balladry provide ‘The Grey Ship’ layers that reveal themselves gradually despite sounding great from the off, while the a cappella ‘Coda’ (mischievously sequenced halfway through the record) dwells on emptiness and “throwing up on the spot.” An emphasis on all things visceral – throwing up, shrieking, gasping for breath; countless references to limbs, wrists, bruises and scars – underpins PLMS, heightening the naked emotion on display. Yet ‘Coda’ also fights the corner of passionate love, and ‘Anteroom’ delves deep into the themes suggested by the album title like some warped but vaguely hopeful lullaby. That said, there’s little room for sunshine in the industrial strut of ‘Milkman’ or punishing wails of ‘Butterfly Knife’, which was inspired in part by Anderson’s own youth and directly confronts the notion of self-harm.

PLMS certainly isn’t a unanimously easy listen (that much should be clear from its title alone), but themes like those of ‘Butterfly Knife’ are leavened by that ever-present defiance. Not easy, but often fascinating, wholly rewarding and genuinely cathartic: towering finale ‘Red Star’ finds Anderson contrasting green and red, light and dark, beauty and sludge to ultimately emerge her own master. “I know nothing lasts forever,” she concedes atop a battering ram of bluster: “If you won’t love me, someone will.”