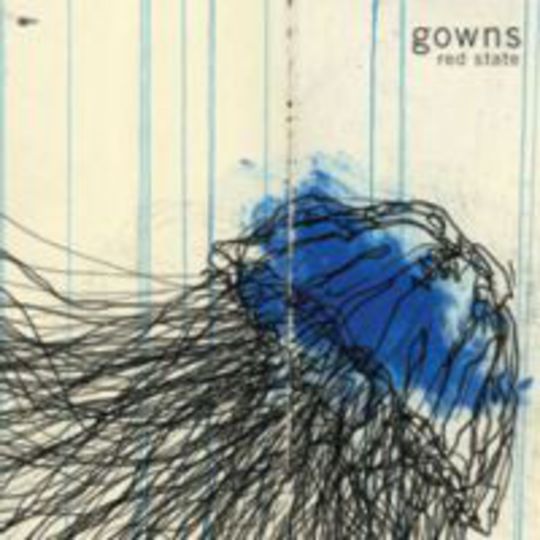 ‘Haunted’ is usually a quaint term when applied to folk music; Gowns are more a whispered hex, resonating evil with every molecule of their being. Red State is quietcore-through-clenched-teeth meets white noise drone; it’s spectacularly head-messy and it should definitely be played with the lights on.

If that hasn’t already sent you screaming for cover, you might find plenty that’s rewarding here. The Berkeley trio’s debut album positively groans with portent, like some forbidden text pronouncing heretical truths pressed into hesitant hands to be read, half-fearfully, away from prying eyes.

Whether you’ll find their revelations ring true or are merely unlistenable and solipsistic will most probably depend on the number and quantity of drugs you’ve consumed over the past twelve months, but the wired look in their eyes says they’re not kidding.

‘White Like Heaven’ is ominous incantation haunted by the spirit of Sunn 0))); lyrically chronicling suburban ennui with lines as banal as "a man outside walking his dog, mowing his lawn" but pulsing with intuitively felt meaning. ‘Fake July’ is a hissing, acoustic strum which sees Ezra Bulcher’s vocal strain with barely-suppressed dissent: "You can smell their desperation like a huge sick bird / the promise of salvation hovering overhead" And ‘Mercy’ starts out a barely perceptible glimmer and winds up raining senseless blows under the malign auspices of a distant rumble, like UFOs watching mankind destroy itself.

Sinister and fleetingly awe-inspiring, you could also make the case for Red State being a bit of a bore, but then, it’s exactly the kind of record you bring yourself to, in the dread hope it might hold up a dark mirror to your soul.