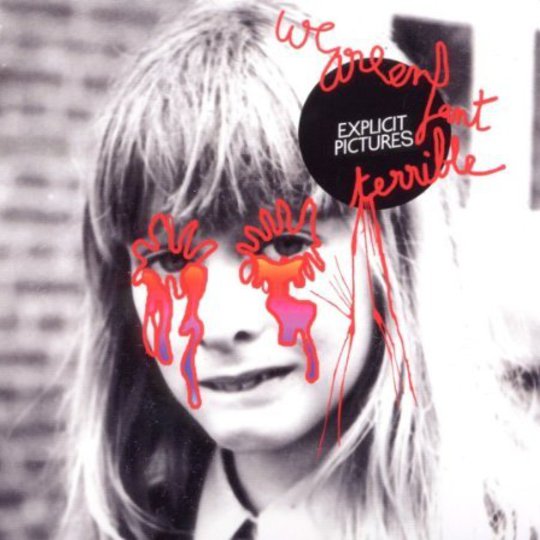 Another week, another vaguely punky electropop band from the continent. This time out it’s We Are Enfant Terrible, who give off the air of being so Parisian that – world’s laziest stereotype alert! - on their ‘off’ days I imagine they plonk themselves down outside a café with Breton striped clothing and artfully posed cigarettes, generally castigating the people they watch go by. They’re that kind of band.

They’re also the kind of band who’d love you to think they’re just as big a geek as you are – convenient, seeing as massive geekdom is currently the epitome of cool. The buzzword everybody’s throwing around for Explicit Pictures is Sonic The Hedgehog. As a young girl who spent probably more time than was sensible trying to defeat Casino Night Zone, I can confirm you will be reminded, in passing, of the joys of the boss music. That only makes it even more frown-making that there’s very little joy to be found in this album.

There is the occasional redeeming earworm on display. ‘Filthy Love’ has a reasonable bassline, and its “Filth, filth, filthy love/I feel, I feel, I feel so low” has an element of catchiness to it. But there’s very little else on the record that has anything approaching the same repeat listening value. The most captivating part of ‘Lobster Quadrille’, by far, is the cacophony of speaking voices that punctuate its beginning and end. ‘Spade Attack’ takes the wannabe sci-fi up a notch, trying to sound like the musical form of Space Invaders without anything approaching the same level of impending doom. By the time Clo is cooing “I’m a real wild child” on ‘Wild Child’, the only response one can muster is ‘Yeah, sure, and I’m a Cyberman – they’re all about the logic and still manage to be more badass’.

It’s the band’s ability to write a hook with seemingly no effort that, ironically, defines the series of deskface moments that is this album. The ‘wanna go home, BORED NOW!’ atmosphere of tracks like ‘A Song to You' is one they’ve clearly put so much work into achieving that it ends up overcooked. You can practically hear the studio debates about how to sound like they don’t give a fuck. They’ve somehow managed to forget that the air of nonchalance only ever works if you’ve got songs as strong as Arnie in his Pumping Iron days to back it up.

It’s the worst kind of middling album: musically it’s alright, if nothing exciting. Everyone plays in tune and time, and there’s just enough silly effects to add a bit of passing interest. But it’s the sound of holding back; keeping the best stuff in the hope they get a second album to be ‘more themselves’ on. It’s designed to seem involving and intriguing, but peeling back the surface just reveals the same old tired mechanics we’ve seen a thousand times before. People don’t dance to these songs, they stand around at the sides of the room desperately hoping everyone else notices them not caring. If you want to appeal to the world of dork, instead of dressing up non-songs in blips and squiggles, give us songs we can throw socially inappropriate shapes to, with lyrics dense enough to spend a lifetime picking holes in. Otherwise, get off the stage.