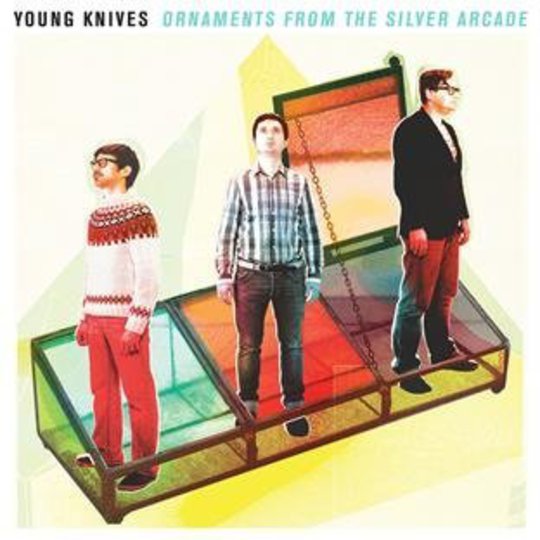 Henry Dartnall right - lead singer of famed Ashby-de-la-Zouch tweedmongers Young Knives - looks a little bit like David Mitchell. And y’know, his band, they sound exactly how Mark Corrigan’s band ought to sound, too. I mean, the bass player calls himself The House of Lords. Classic Mark humour, right? And their style, their image, is that of the lovable and utterly hopeless - just like Mark is both of these things. In all seriousness there are very few facets of the band’s appeal I couldn’t tangentially analogise to Mitchell’s Peep Show persona*.

To elaborate, though their formula of angular guitar, bobbing bass-line and 4/4 drum-beat loosely prescribes to a certain moribund jangle-pop scene, to pique the listener’s interest the trio first have to charm away our righteous - and rightful - cynicism, as regards said moribund jangle-pop scene. Thing is, they don’t bother penning rabble-rousing anthems in a masterfully of-the-moment style, as a band like Arctic Monkeys once did; nor are they so ‘cool’ as to transcend the topics and trends of the day with an aloof superiority as, say, The Cribs (sort of) managed to. Young Knives’ attraction derives from the unabashed enthusiasm with which they fail at all that stuff, and for that (and this) they deserve their hard-won plaque in Britpop’s crumbling pantheon.

So it’s difficult to objectively judge the dapper thirty-somethings without taking The Mark Effect into account - that being a blithe determination to go about life by your own means, whilst conforming to the fundamental traditions of the rule-making nitwits around you. On the one hand, Ornaments From the Silver Arcade is a solid ‘indie’ record, with nuance and character spewing out of its cuff links. On the other, the experimental/psych interludes are throat-cleaveringly awful - indeed, they often will be when your band is not called Deerhunter - and where lyrics fail to raise a smile or even a knowing nod, melodic crutches are brittle as twigs.

Thankfully these interludes are rare, and no great hindrance to the record’s keen grasp of Fun. Intoning with an amusingly matter-of-fact simplicity, Henry takes it upon himself to step forward and address the recession head-on. “The cheque has bounced again/The wolves are at my door/And the injuries that I sustained/Have reared their ugly heads again” offers ‘Everything Falls Into Place’, while ‘Woman’ simply asks, “Do you want to build a house?/Are you free to build a house?”, which I imagine to be a scoff at the Big Society’s lily-livered ideals. And that’s not to mention the tunes, which are plenty enjoyable, and possess more staying power than most of the standard-fare guitar bands we’ve seen tipped over the last few years - most of whom I’d rather see ‘tipped’ over the edge of Niagara Falls in a barrel.

After a mid-album lull, closers ‘Storm Clouds’ and ‘Glasshouse’ resurrect Young Knives’ playful, unselfconscious spirit. The former pits Henry’s cheeky snarl against an ominous heavy rock backdrop, and the latter - reminiscent of The Rakes’ chucklesome ‘Work, Work, Work (Pub, Club, Sleep)’ - serves as a reminder that so-called ‘landfill indie’ can still be mined for the odd gem. “She’s my daughter/She’s the apple of my eye/Hear her laughter/Fills me up like shepherd’s pie” says the second verse. The daughter/shepherd’s pie comparison in pop has been an agonisingly long time coming; it does not disappoint. Throughout the record, Henry’s gung-ho yelp enlivens and delights to the point that melody is redundanced, a feat boasted by few singers whose music exhibits an overt pop bent.

When shit hits the fan, The Mark Effect is equally a blessing and a curse. Whether Ornaments... happens to be polishing away the band’s endearing tweed-pop or flirting with arena rock string-jerk, you could argue there’s an air of artistic compromise persistently tugging at its lapel. ‘Sister Frideswide’ is a catchy enough exercise in downbeat indie pop - and far from the weakest of the album’s cuts - but if downbeat indie pop is on the menu it really highlights the fact you need look no further than Wild Beasts, who are doing this sort of thing with such deft sophistication as to make a band like Young Knives seem withered and grey by comparison.

*Holy Mothera Jesu, looks like Peaches Geldof beat me to the Mark Corrigan comparison. Outwitted by a scientologist! How fucking depressing.