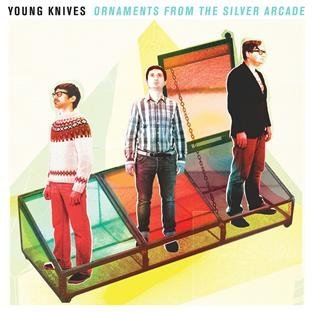 Ornaments From the Silver Arcade is a solid ‘indie’ record, with nuance and character spewing out of its cuff links.»

closehaving made their mark with mercury nominated debut 'voices of animals and men' and follow up 'superabundance', young knives were already in possession of critical and commercial success and a well deserved reputation for jaw dropping live shows. with 'ornaments from the silver arcade', the third studio album from the trio, their desire to move beyond the familiar became a driving force of the writing and recording process. so, to blow away the old methods, instruments were swapped in rehearsals; to change the sound, new instruments were introduced and songs were approached from multiple directions. even location managed to play its part. the resulting demos were turned into the finished album at la's seedy underbelly studios with renowned producer nick launay and a cast of additional la musicians from percussionists to soul brother and sister backing singers. the band filtered into the recordings their love of dance music in all its myriad forms and pushed the experimental button at the right times. with nods to the motorik influences of krautrock creating more space in the tracks the band have delivered a new young knives sound, paradoxically both sparser and more complex than that their previous albums. the result is a collection of songs that retains the trio's understanding of a spiky pop hook, but build on top of that familiar post punk template the groove of acid house and the smoothness of soul across its tracks. it is the album on which brothers henry and thomas dartnall and oliver askew leave behind for good the world that birthed them of quintessentially english musical references and deliver a wider, greater collection of songs.
description from www.roughtrade.com