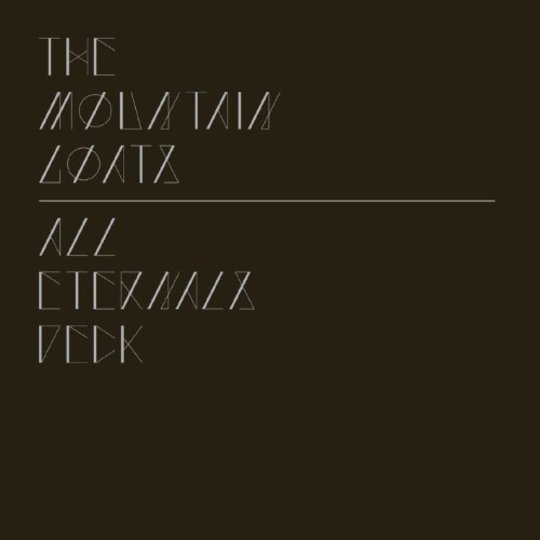 When a new Mountain Goats album rolls around, fans know what to expect. John Darnielle's inimitable, unpolished voice. Instrumentation that never gets too grand or flashy. These things don't change. But 18 albums in, what does change – at least for me – is the effect it has. Whatever the zealots might say on various adoring websites, I think there's a limit to how many times John Darnielle can express something in a way that's so right and so true that it's overwhelming. At some point it all becomes too familiar and you chase new thrills. Darnielle's done well by me over the years – he's hit the mark dozens of times, but I haven't wholeheartedly fallen for a Mountain Goats album since 2002's Tallahassee.

My first few listens of All Eternals Deck didn't change anything. Some songs were warm and reassuring, others were angrier, a little more desperate. No surprises there, then. There were a few instant highlights, like ‘For Charles Bronson’, where a gorgeous bass accompanies a sly take on Bronson's inner life. With its suggestion that the crinkly-eyed star felt the need to pump himself up with proto-Schwarzeneggerian mantras of self-belief, like “keep the heart of a champion/never let them see you weak”, it's a great song. But mostly I felt old and numb, petulantly listening to ‘Going to Georgia’ (from 1994's Zopolite Machine) on repeat to get a diluted, yet still potent, taste of old Mountain Goats Moments, when nothing in the world could be more perfect than John Darnielle yelling, “The most remarkable thing about you standing in the doorway is that it's you, and that you're standing in the doorway.” (If anyone knows this song, you'll know exactly what I mean).

Then out of nowhere, I woke up with opener ‘Damn These Vampires’ in my head. A powerfully poetic compression of the Coen Brothers' film True Grit, plus vampires, it's brilliant: “Brave young cowboys of the near northside/mount those bridgerails, ride all night. Scream when captured, arch your back/let this whole town hear your knuckles crack.” How could I have missed that awesomeness? I started paying more attention.

'Age of Kings’ was the next killer song. It wasn't the music. Sure, there are enjoyably swelling violins, but that wasn't it. It was the lyrics that put together the remote, romantic places of fantasy novels with an emotional fuck-up of a protagonist. “Halls of the stone tower in the foothills,” it starts, opening up to a delightful imagined past, but despite his good intentions, the guy whose perspective we're sharing just can't get it together, “Reach down to the moment when I should have said something true/shadows and their sources are stealing away with you.” It's fascinating and plaintive, a transporting, low-key triumph.

Yet with its incongruous images – its swords and jewels against concrete walls – it's also more than that. It functions as a fine example of John Darnielle's ability to flip expectations. Whenever I thought I had a hold on a song, it went somewhere else and then came back again. Wherever a song's undertow took me, these occasional alien notes made the journey more surreal and sharp. I know people accuse John Darnielle of overloading his songs with too many images, but I think the effect is great. ‘High Hawk Season’, halfway through the album, shows this at its best. It has these solemn male harmonies, like a barbershop quartet, intoning, “Rise if you're sleeping, stay awake/We are young supernovas and the heat's about to break.” It's haunting. But it's about The Warriors, a cult Seventies film about a violent Coney Island street gang, so it's a ballad where the obvious choice would be a punk tune. The juxtaposition between style and content here is pretty much ingenious.

Ultimately, since no coherent theme jumps out of All Eternals Deck, a weird intersection emerges between the many and varied images it conjures up for the listener and whatever Darnielle is actually going on about. “Ghastly things and crystal ball symbolism. Abuse survivor stuff. Seventies occult horror movies and their feeling of dread”, he says. Well, okay, these things crawl out of some of the songs, but plenty of other lyrics are still a mystery to me. And at this weird intersection, where his fully-formed images bash into my vague understanding, there's not much that's familiar. Instead, there's something that feels new, creepy and desirable. It may not be the old Mountain Goats kick, but whatever it is, it'll keep me returning to All Eternals Deck for a long, long time.